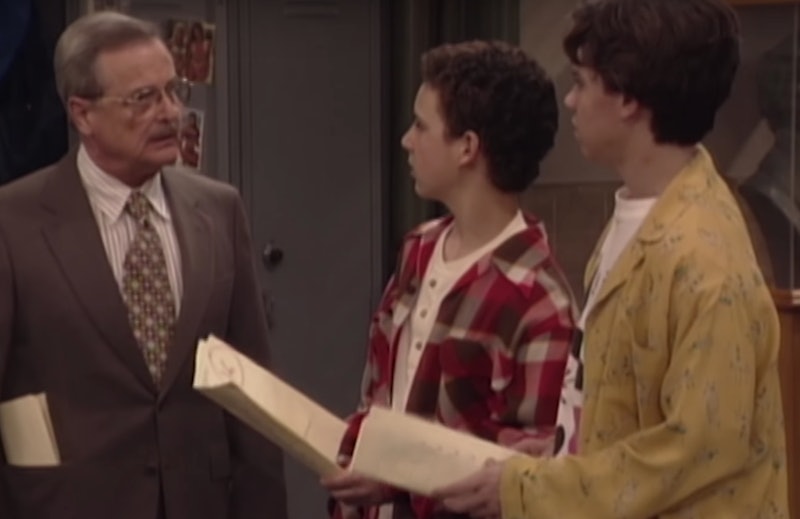 Though the character sure had his fair share of funny moments on the sitcom, actor William Daniels made it a point to never let Mr. Feeny become a joke on Boy Meets World. In a new Today Show segment, he talked about Mr. Feeny's legacy and why he is such an important television character. Joined by his Boy Meets World costar and real-life wife Bonnie Bartlett, Daniels shared that he made sure Cory Matthews's teacher, next-door neighbor, and frequent advisor was "written with respect." His reasoning is about as heartwarming as one of Mr. Feeny's life lessons, because of course it is.

At the top of the clip, Daniels got into why it was so important to him that the Mr. Feeny character was cast in a positive and considerate light. He said,

“What was my favorite part about doing Mr. Feeny on Boy Meets World? I wanted to make sure the producer understood that I didn’t want to make fun of a teacher. They’re too important to this country and they’re underpaid. So I wanted him, Mr. Feeny, to be written with respect, which they were kind enough to do. So I was happy to do that, and it worked out very well.”

Mr. Feeny may be retired, but that does not mean he is done sharing pearls of wisdom with the class.

Daniels and Bartlett also revisited some classic Mr. Feeny moments, such as the character's tearjerker of a final scene. “He’s alone in the room and he looks over at the empty desks and he says, ‘I love you all,’” Daniels recalled. “And I thought that was a really nice way to end it.” Barlett also waxed nostalgic about the scene where Dean Bolander compares Fred Savage’s professor character to Mr. Feeny. “I said, ‘You don’t have one ounce of teacher in you like this man does,’” she remembered. “It was a good episode for me … I like that kind of thing.”

And as for Daniels's favorite Mr. Feeny Lesson? Why, that would be the final piece of advice he gave to Cory, Shawn, Topanga, and Eric: “Believe in yourselves. Dream. Try. Do good.”

Mr. Feeny was hilarious, a good role model, and compassionate without being saccharine, and uh, it isn't every day you see those qualities in a teacher on a scripted shows. Sure, there are other examples of good TV teachers (Jessica Day from New Girl and Helena St. Rogers from Pose are two that come to mind), but there have been a lot of, *ahem* questionable ones on the small screen. Breaking Bad, Teachers, Community, Strangers with Candy, and the TV adaptation of Bad Teacher all feature educators who forgot to take their daily dose of "Do good." But you know what? It is OK. Those shows would be incredibly different programs without their deeply flawed teachers; no one's saying Walter White, for example, should be replaced with a noble, Feeny-esque fellow. That would be bonkers.

As entertaining as those messy characters are, it is also great to have the occasional wise, honorable, and kind-hearted teacher on television because, as Daniels said, teachers are "too important." It's nice to see them do good.