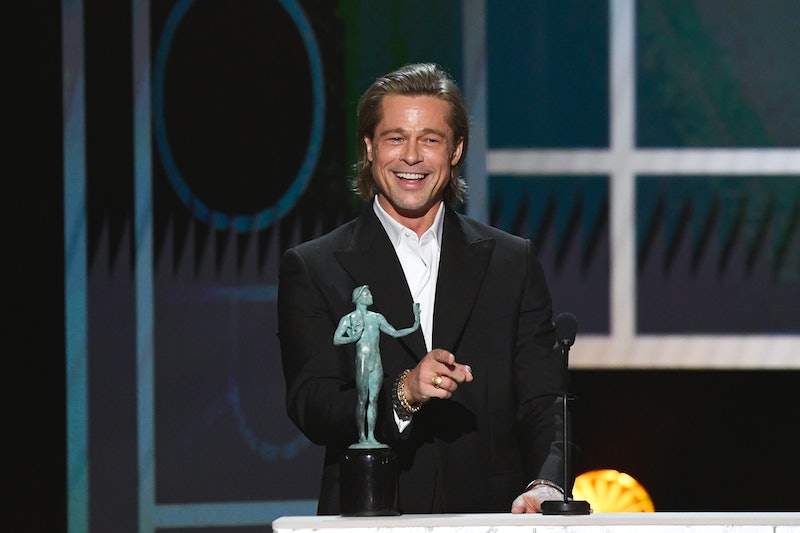 If they gave out awards for acceptance speeches, the Screen Actors Guild awards would have just crowned a winner. Brad Pitt's acceptance speech at the 2020 SAG Awards featured jokes about his Tinder profile, his co-stars' feet, and even a dig at his recent divorce. "I gotta put this on my Tinder profile," he quipped as he walked up to the podium to accept the award for his performance in Once Upon a Time ... In Hollywood.

Though it initially seemed like Pitt was going to take a turn for the sincere by thanking his "brothers and sisters" in acting, he instead shared his gratitude for his co-stars' feet. "Leo [DiCaprio], Margot Robbie, Margot Robbie's feet, Margaret Qualley's feet, Dakota Fanning's feet," Pitt said. "Seriously, [Once Upon a Time ... In Hollywood director Quentin Tarantino] has separated more women from their shoes than the TSA."

Pitt then got self-effacing, seemingly joking about his highly-publicized divorce from Angelina Jolie and his struggles with alcohol and substance misuse. "Let's be honest, it was a difficult part," Pitt joked about his Once Upon a Time character, stuntman Cliff Booth. "A guy who gets high, takes his shirt off, and doesn't get on with his wife — it was a big stretch."

His speech earned a great deal of laughter in the room, as well as on Twitter:

In addition to praising Pitt for his self-deprecation and sense of humor about fame, plenty of Twitter users were busy trying to find the Oscar nominee on Tinder. After all, Pitt told the New York Times in December that he's been single since his split from Jolie in September 2016, so it's not entirely implausible that he's on dating apps, but hasn't he ever heard of Raya?

Pitt, who is also nominated for a Best Supporting Actor Oscar for Once Upon a Time ... In Hollywood, seems to be making a play for best-speech-giver this awards season. On Jan. 5, after winning a Golden Globe, he gushed about his co-star Leonardo DiCaprio and referenced the most enduring cinematic debate of the past 20 years. "He's an all star, he's a gent, and I wouldn't be here without you, man," Pitt said of DiCaprio — or, as he called him, "LDC" — before throwing out a nod to Titanic. "Still, I would've shared the raft."

There's just over a month to go until the 2020 Oscars, so there's plenty of time for Pitt to workshop some new jokes for his potential acceptance speech. Everyone else, on the other hand, better scramble to find his Tinder before the whole of Los Angeles matches with him.