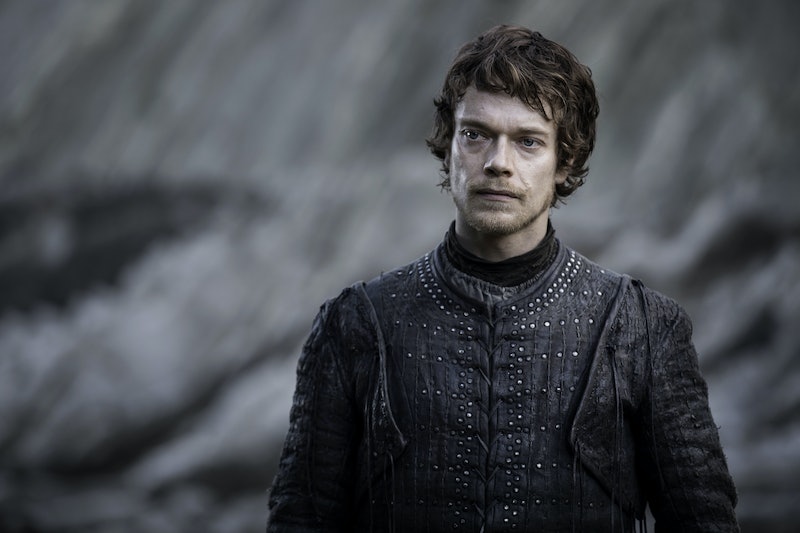 Theon Greyjoy ultimately got a hero's tragic death in Season 8 of Game of Thrones, but at one point, it looked like he might have died a lot earlier in the saga. During a recent appearance on The Late Late Show, Alfie Allen revealed Bran killed Theon in a Game of Thrones script — but the dramatic death turned out to just be a prank from the show's creators, David Benioff and D.B. Weiss.

While chatting about Theon's GoT death — which came at the hands of the Night King as he attempted to protect Bran (Isaac Hempstead-Wright) from the evil king — Allen revealed that he was actually told that Theon would die way back in Season 2. "The script was given to me, and basically, I give this rousing speech — if I do say so myself — and at the end of my speech, Bran pops out and stabs me in the chest and says, 'This is my Winterfell, not yours,'" Allen recalled, likely referring to Theon declaring himself the Lord of Winterfell and usurping Bran. "And so I took it on the chin and got on with it."

Because Allen was willing to go along with whatever was written, and he wasn't upset that his character was being killed off, it took three weeks before Benioff and Weiss finally revealed that it was all a prank. "[The rest of the cast] decided to tell them that, 'Maybe you should decide to call him, because maybe he's tearing his hair out,'" Allen recalled. "But I wasn't. I was on vacation."

It turns out that Allen isn't the only Game of Thrones cast member that the show's creators have tried to prank over the years; the actor also recalled another fake script that featured a dramatic change to Jon Snow. "I think they kind of did a similar prank to Kit," he explained. "I think there was a White Walker who burned [Jon's] hair off, so he was going to have to wear a bald cap for the rest of the series."

Weiss confirmed the fake Jon Snow storyline to Entertainment Weekly in 2017, but the outlet revealed that the proposed scene also involved Jon being horrifically disfigured, covered in blisters, and missing parts of his skin in addition to losing his famous curls. Weiss explained that they told Harington that "HBO was worried the Jon Snow storyline was too Harry Potter, and they wanted to do something to make it darker," when they handed him the fake script. "They thought he was such a strong actor that he could handle it. We kept this up until we started laughing. He was a remarkably good sport about the whole thing."

However, the cast managed to get Benioff and Weiss back for all of their pranking, thanks to Nikolaj Coster-Waldau's ingenious plan to have Jaime Lannister get a buzzcut. According to EW, once the actor discovered that Jaime was going to get a minor haircut around Season 4, he decided to play an elaborate prank on the creators. "Nikolaj wrote this Angry Actor Email about how he was very upset that we were changing his hairstyle," Weiss explained to the outlet. "He said ... he was going to take it upon himself to get his own haircut that he felt best reflected Jaime Lannister as he saw him."

Two days later, Coster-Waldau finally sent them a picture of his new look — a military-style buzzcut. "We thought we’ll have to get a Jaimie Lannister wig at last minute at tremendous expense," Weiss recalled of the panic that ensued. "HBO’s lawyers were calling his lawyers…" Finally, the actor emailed them an revealed that it was all a joke, and the picture in question was an old one.

The night may be long and full of terrors, but based on Allen's story — and all of the practical jokes that the cast and crew played on one another over their decade of filming — but shooting Game of Thrones was definitely full of pranks.