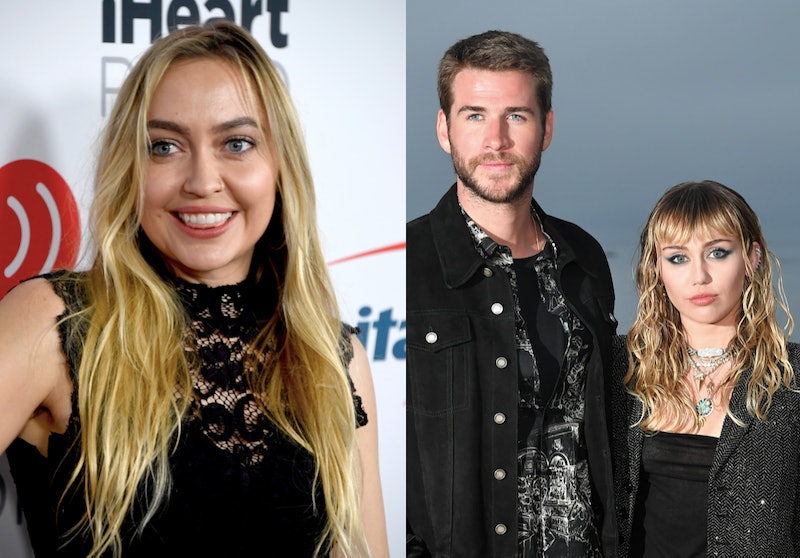 If you know anything about the Cyrus family, you'd know that the crew will always be there for one another, especially when the going gets tough. And that's especially been the case recently. As E! News reported, Brandi Cyrus addressed Miley Cyrus and Liam Hemsworth's split with nothing but support for her younger sister.

On the Aug. 14 episode of her Your Favorite Thing podcast with Bachelorette alum Wells Adams, Brandi opened up about the recent news concerning the "Mother's Daughter" singer. But, don't expect the podcast host to open up too much about the situation. "It's not my business to talk about and it's nothing anything of mine to tell," she said. Brandi continued to express that she's simply there for Miley if she needs her:

"There's nothing I can really say. I just, I'm here for her, obviously, and I've been spending a lot of time with her. When she's ready to talk about it or whatever, then she will."

According to E! News, prior to Brandi's recent incredibly supportive statement, she seemingly hinted at her sister's split from Hemsworth on Instagram days after the news first broke (although, it should be noted that she did not specifically address Miley's breakup at all within the post).

"I’ve learned that life sometimes takes us through seasons when we cannot understand why things have to hurt so much, or be so hard, but all we can do is trust that there is purpose in everything, even the darkness," she wrote in the caption for her post, which featured a photo of herself on vacation (likely the vacation she recently went on with Miley and Kaitlynn Carter, who's also recently single), "and in time everything will make sense, and all of that purpose will be revealed when the time is right, and we will be stronger and better for it." While it sounds like her caption could be a subtle way of addressing the breakup news, as she said on her podcast, Brandi is only focused on being there for Miley whenever she needs it.

In case you missed the surprising, heartbreaking news, People reported on Aug. 10 that Miley and Hemsworth had split after less than a year of marriage and after an off-again, on-again 10 years together. A rep for the "Wrecking Ball" singer released a statement about the news to People, which read,

Following the news, both Miley and Hemsworth have, subtly and not-so-subtly, addressed that they had parted ways. The singer took to Instagram after the breakup news broke to write a message about how she's forever evolving, which ties back to her rep's statement about her recent breakup. As for the Hunger Games actor, he went a more direct approach on Instagram, writing, "Just a quick note to say that Miley and I have recently separated and I wish her nothing but health and happiness going forward."

While Hemsworth and Miley are, understandably, caught up in a bit of a stressful situation when it comes to their split, it's nice to see that they have loved ones in their corner, like Brandi, who can lend some support when need be.