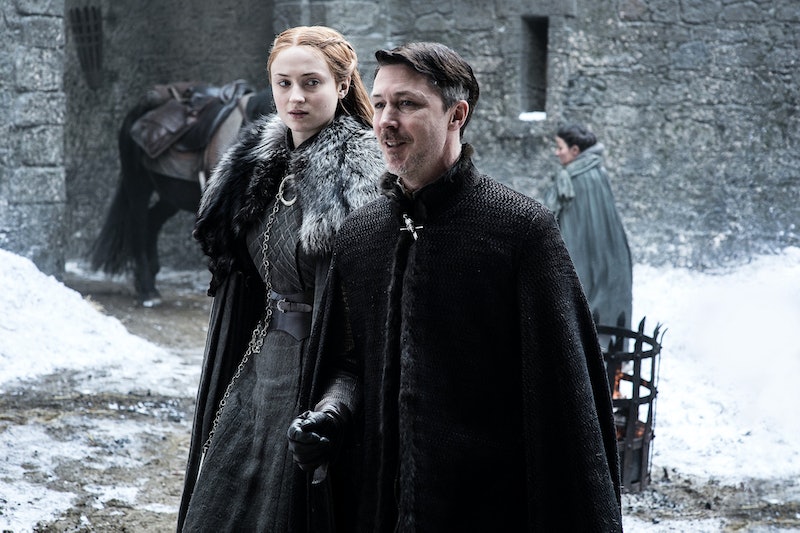 From the very beginning of Game of Thrones, there's been one character who's out-manipulated everybody else in Westeros: Petyr "Littlefinger" Baelish, Catelyn Stark's erstwhile stalker who's lately had his sights on Sansa Stark in Winterfell. Everybody always knows that Littlefinger is up to something, but he's usually got so many machinations brewing at the same time that he manages to slip by without facing very many repercussions. But when it comes to the newly returned Bran Stark, he's got another thing coming; in Episode 4, "The Spoils Of War," Bran quoted an iconic Game of Thrones line that proves he can see right through Baelish's mind games.

In their first meeting together this season (and possibly ever, if I remember correctly), Baelish gave a gift to the newly returned Bran Stark — the Valyrian steel dagger that an unnamed cutthroat mercenary attempted to kill Bran with way back in Season 1, thus setting Catelyn Stark off against the Lannisters and sparking the War Of Five Kings in the first place.

Bran, however, isn't so great with social cues anymore now that he's officially the Three Eyed Raven, and had only one thing to say to Baelish in return: "Chaos is a ladder." Game Of Thrones fans should recognize that line instantly, because Baelish is the one who said it way back in Season 3. Heck, it even appeared in the trailers that year.

Clearly Baelish recognized it too when Bran said it, given the look on his face Like everyone else in Winterfell, he has no idea how to handle Bran's strange powers — but unlike Sansa or Arya, who are merely creeped out, Baelish actually would have something to lose if Bran were to tell someone else about the schemes he's cooking up.

Luckily for him, Bran can barely bring himself to care about anything now that he knows about everything, so Littlefinger's secrets are probably safe for now. But even still, I suspect his powers will eventually jam a wrench into the goings on in Game Of Thrones — and I, for one, can't wait to see how it happens.