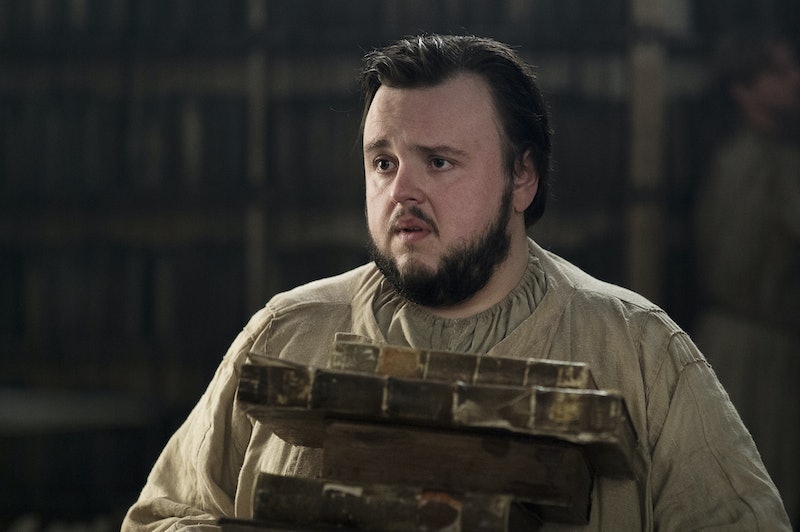 The Game Of Thrones premiere "Dragonstone" set the stage for the Great War to come in the final two seasons… dropping plenty of Easter eggs along the way. But one clue in the Game Of Thrones Season 7 premiere that even the most keen-eyed viewers may have missed hints at an intriguing connection between Samwell Tarly, Petyr Baelish, and Arya Stark — and it all involves an innocuous dagger.

The climax of Sam's storyline at the Citadel was the revelation that the volcanic island of Dragonstone is home to a vast wealth of dragonglass, one of only two known substances (along with Valyrian steel) capable of killing White Walkers. But while that discovery was emphasized, another may have slipped past viewers unnoticed. Before Sam lands on the page about Dragonstone, he quickly scans past a couple of other pages… and the one immediately preceding the revelation about Dany's ancestral home contains a tantalizing clue about the future of Season 7.

The page in question is onscreen for less than a second, as Sam quickly leafs by it, unaware of its importance; but Thrones fans with an obsessive knowledge of the show's history may have recognized what was depicted in the page's illustration:

That's an image of the very dagger that was used by the catspaw assassin to in his attempt to kill a comatose Bran Stark way back in Season 1. The ownership of the dagger — a priceless Valyrian steel blade, one of only a handful in existence — became a key piece of evidence in identifying Bran's would-be murderer. Bran's mother Catelyn took the dagger with her to King's Landing, where her childhood friend Petyr Baelish confessed that the weapon used to belong to him… before he lost in a bet on a tournament to none other than Tyrion Lannister. This information is what leads Catelyn to seize Tyrion at the Inn at the Crossroads, kickstarting the conflict between the Starks and the Lannisters and sparking the War of the Five Kings.

The sight of this familiar dagger is nostalgia-inducing, harkening back as it does to Thrones' earliest days. But this is probably not just a simple matter of an Easter egg for savvy fans; it could very well be laying the foundation for a huge twist coming later this season. You see, this isn't the first time the blade in question has popped up in relation to Season 7. Most curiously, the Valyrian steel dagger was seen on Arya's hip in Entertainment Weekly's Stark reunion photoshoot earlier this year.

How the heck does Arya come to be in possession of Littlefinger's dagger? Figuring that out depends on figuring out where the dagger is now — and there seem to be two distinct possibilities. The last time it was seen onscreen, the dagger was being examined in Littlefinger's brothel; either it's still there, amid the wreckage after the establishment was ransacked by the Faith Militant in Season 5… or Littlefinger, who's currently at Winterfell, still has it. (Some viewers theorize that it was the same dagger he held to Ned's throat when he betrayed him in the Throne Room, but the distinctive hilt cannot be seen and that theory has never been confirmed.)

Either scenario is possible: Arya is currently heading to King's Landing with the intention of assassinating Cersei (although it's unclear what would draw her to an empty brothel), while many fans assume that she will abandon that mission to head north and meet her family at Winterfell instead. Wherever it is, it seems likely that Arya will find it before long; its discovery may in fact have already been teased in a shot from the Season 7 trailer of Arya crouching down to look for something under a bed.

But what's even more intriguing than how Arya finds the dagger is what her discovery might lead to. The sudden resurgence of the weapon — especially if Littlefinger was not in possession of it this whole time — may lead to a cascading series of revelations that unmask Lord Baelish's role in the War of the Five Kings and the downfall of the Starks. (Possible spoiler alert!) In the books, it's later revealed that Littlefinger was lying about who he lost the dagger to; he actually lost it to Robert Baratheon, after which it was stolen from the royal armory by none other than Joffrey, who was the one who sent the assassin to put Bran out of his misery.

Why would Littlefinger lie about this? Well, probably to incite exactly the kind of conflict that arose out of his misinformation. Shifting the blame onto Tyrion is exactly what led Catelyn to her drastic action of arresting him… and everything else spiraled out from there. If the truth finally came out, it would probably be enough to make Jon Snow shove Littlefinger against a wall, as glimpsed in the Season 7 trailer, don't you think?

But the dagger might also be important for more than just unmasking Littlefinger's machiavellian manipulations. Why was a Valyrian steel weapon depicted in a book about dragonglass, anyway? A further analysis of the page reveals the following text:

When Aegon the Conquerer forged his Seven Kingdoms, he and his descendants would often decorate their blades with dragonglass, feeling a kinship with the stone.

If Littlefinger's dagger also happens to have dragonglass inlaid into its hilt — in addition to the Valyrian steel of its blade — then it has both substances capable of killing White Walkers merged into one object. Will the dagger turn out to be some sort of super weapon against the Night King? If so, does the fact that Arya is wearing it indicate that she'll soon play a big role in the Great War?

So many questions are raised by this seemingly insignificant Easter egg; it will be fascinating to see how they play out over the course of the next six episodes.