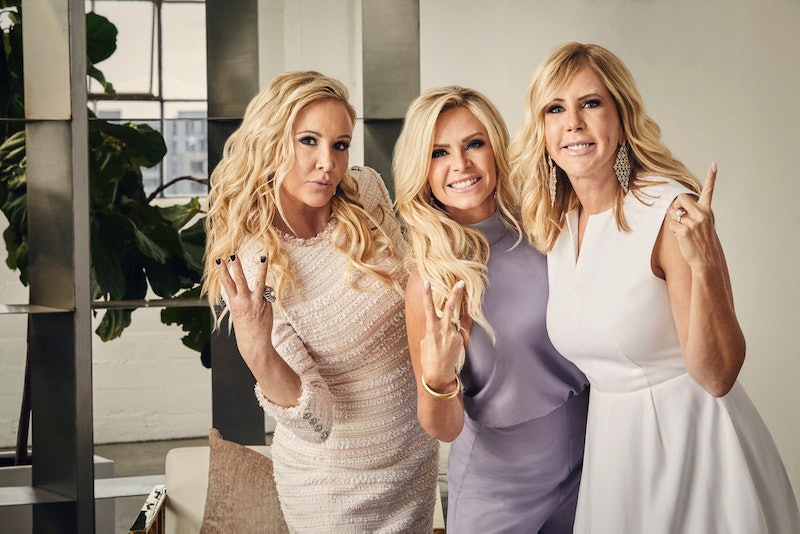 Whether you love her or loathe her, Real Housewives of Orange County fans agree that Vicki Gunvalson's downgrade to a "Friend of the Housewives" is the end of an era. She was the only original Housewife left. After the news went public, Bravo stars reacted to Vicki's new role on RHOC, just like fans did.

She wasn't just the only OG cast member on RHOC. She was the only full-time cast member remaining from the original Real Housewives show. This is a major shakeup. Housewives everywhere now know that no one's role is secure from one season to the next, no matter how established she may be.

Vicki will still be a part of Season 14, but she will not hold up an orange in the opening credits or utter a tagline. Unfortunately, fans won't get to see as much of her life as they did for the first 13 seasons, but come on, this is Vicki Gunvalson. The "OG of the OC" will definitely be involved in the drama.

In a July 2 Instagram post, Vicki confirmed the RHOC news, but she also assured her fans, "I am back again this season right in the middle of the action in a different role."

Vicki isn't the only one sounding off about the major change. Other Bravolebrities weighed in.

RHOC executive producer and king of all things Real Housewives Andy Cohen weighed in on Vicki's post. He reminded her that she is the show. Aside from that being a momentous compliment, it says a lot that Andy even commented.

He doesn't follow any of the Real Housewives on Instagram, so it's not as if he saw Vicki's post while scrolling through his feed. He went out of the way to let Vicki know that she has a major role in Housewives history.

Now that Vicki isn't a full-time Housewife, Tamra Judge is the cast member with the longest amount of time in a full-time role. Tamra joined RHOC during Season 3. But instead of reveling in her new seniority, Tamra reassured Vicki that she will always have a role on the series.

Shannon Beador followed Tamra's lead and told Vicki that she is "not going anywhere" even with the change in status.

Real Housewives of Orange County alums Lizzie Rovsek and Lydia McLaughlin did not comment on Vicki's new role, but they both commented with heart emojis on her Instagram post.

If anyone had hope that Kelly Dodd and Vicki were on better terms after last season's reunion drama, it looks like they're not. Unlike the other Bravolebrities, Kelly's response to Vicki's demotion was not positive. Well, it was positive about the show itself — not Vicki.

In the comments section of Kelly's own IG post about the new season, one fan wrote, "The show will fail without Vicki. Hope you all realize that." In response, Kelly wrote back, "I bet you this year's ratings will surpass her last 3 years!! Guaranteed!!" In response to another follower who said that Vicki is "trying to downplay the fact that she was demoted," Kelly wrote, "She told everyone she wasn't and I was a liar!! #truth."

As fans know, Kelly has claimed that Vicki will be a "Friend of the Housewives" for a while now. In a video that originally appeared on Instagram Story in February, Kelly referred to Vicki as "one of our friends" during a conversation with Gina Kirschenheiter. (She also called Vicki a "pig," which is not OK, but she wasn't wrong about Vicki's reduced role on the show.)

It's unclear how different the show will be with Vicki in a lesser role. At this point, RHOC fans have only seen promo photos and the trailer for Season 14. Nevertheless, no one can deny this situation has incited an emotional response from Bravolebrities and fans alike.