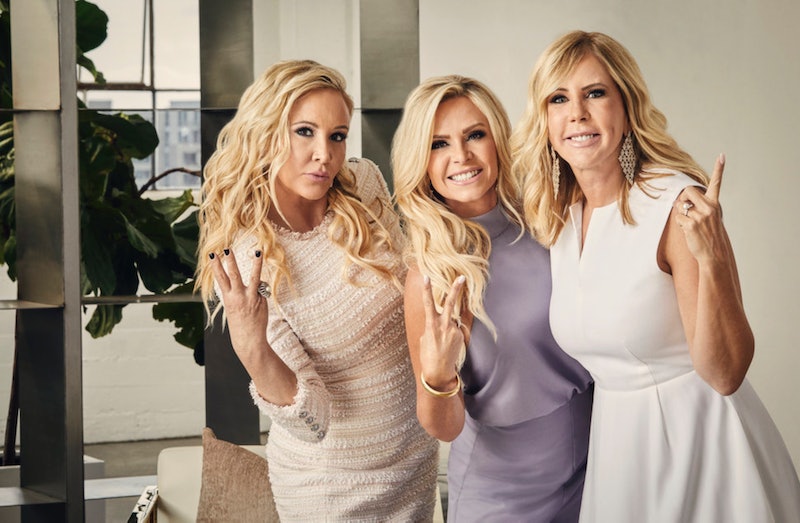 If you do not feel compelled to pour out a tequila shot after you read Vicki Gunvalson’s Instagram post about RHOC Season 14, go sit in a little family van until you get your priorities in order. On Tuesday, July 2, just a handful of weeks after Lisa Vanderpump left The Real Housewives of Beverly Hills, Us Weekly reported that Vicki has exited the The Real Housewives of Orange County main roster after 13 seasons. According to the outlet, she is now a Friend of Housewives. Up is down, left is right, and the OG of the OC has turned in her orange.

After the news broke, Vicki took to social media to seemingly address this shocking update and assure viewers that she will be part of the upcoming season. “For the past 14 years I’ve opened up my life, my loves, my ups and downs on The Real Housewives of Orange County and I am proud to be the ‘OG of the OC,’ she wrote. “I am back again this season right in the middle of the action, and I hope you have as much fun watching the show as I did living it in front of the cameras. Stay tuned to Bravo August 6th.”

Us Weekly also released the trailer for RHOC Season 14, and if I am being perfectly honest? I barely remember anything that happens in the preview. When I watched it, my mind was still too busy processing the cast shakeup news. However, I did notice that Friend of Housewives Victoria Gunvalson does appear in a few scenes, and much like her IG post, those trailer moments brought me peace. No, the show won't be same without her on the main cast, but at least she'll be around in some capacity.

As earth-shattering as this turn of events may be, it did not manifest out of thin air. Back in February, RadarOnline reported that an insider said Vicki had been demoted to Friend of Housewives but "she hasn’t agreed to take the offer." But a month later, Hollywood Life reported that Vicki was filming with the rest of the cast "despite reports and rumors she wasn’t coming back." But then, Us Weekly shared that Vicki was apparently not included in the RHOC Season 14 cast photo.

And sure enough, when Bravo unveiled the Season 14 press portraits on Tuesday, July 2, fans far and wide immediately realized that the Queen of Whoop It Up is nowhere to be found in the group picture. On the bright side, the photo series does include some solo Vicki "Friend of Housewives" Gunvalson shots, as well as a few pictures she took with current RHOC stars Tamra Judge and Shannon Beador. She may be a Former Real Housewife, but at least she is not an Estranged Real Housewife. (Do you know what's going to take some getting used to? "Former Real Housewife Victoria Gunvalson.")

The first time you see this picture of the Season 14 cast, it is like looking at a drawing out of a Where's Waldo? book. You know, if Where's Waldo? was less about trying to find a bespectacled man in a striped sweater and more about searching for an insurance agent who dry heaves whenever anyone within a 10-mile radius vomits.