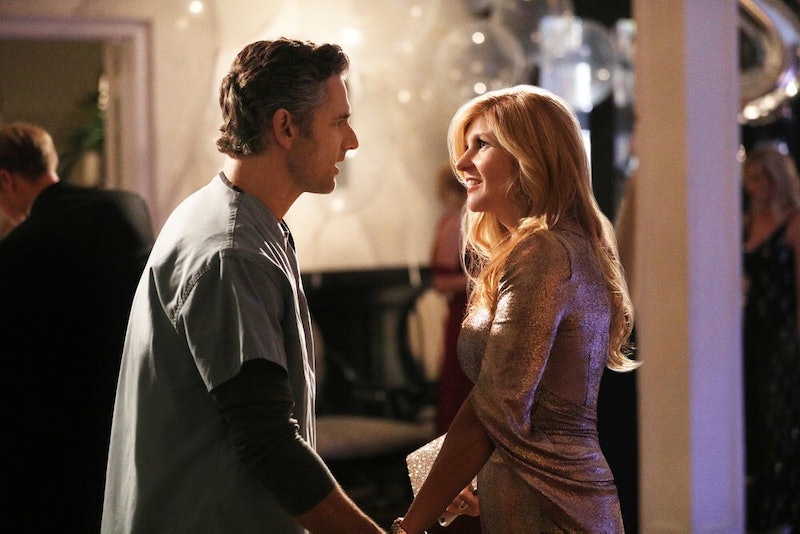 Those who are familiar with the Dirty John podcast from the Los Angeles Times know very well that it doesn’t tell a happy, romantic tale. But rather, the true story is one about how the possibilities of genuine love and companionship can cloud judgment and let red flags slip by when they'd otherwise send someone running. Bravo's adaptation of the podcast excels, at least in its first episode, in sending one of the most essential messages of the story — that it wasn't Debra's fault she fell for John, and that it could have happened to anyone.

In Dirty John, Connie Britton plays Debra Newell, a single mother of two adult women, who falls for a man named John Meehan (Eric Bana). Debra, based on a real person, is an admirable woman with loads of money, a successful business, and good friendships at work — she doesn’t need anyone to take care of her — but she’s been unlucky in love, which is a totally reasonable thing to want. The show is quick to divulge that she’s been divorced four times over, and a montage of horrible dates with drunks, men who can only talk about themselves, or suitors still hung up on hold flames is enough to make anyone recoil from Debra’s dating pool. She’s, by all signs, a catch, and still somehow can’t catch a break when it comes to a long-term partner. Enter John.

He’s a little slovenly when he arrives at Debra’s house for their first date, despite his supposed status as a successful doctor, putting her daughter Veronica immediately on the defensive. But he tries to be friendly despite Veronica’s rudeness, and when he and Debra go out, John is really listening to her. He lets her talk about herself and raves about how strong and interesting she is. He’s charming. He’s a breath of fresh air for a woman who’s downright exhausted after a slew of bad dates and years of failed relationships.

When you’ve walked miles in a blizzard, you’re going to immediately fall into the first warm blanket you see — you’re not going to first examine it for holes and stains.

Some initial warning signs are quick to reveal themselves to Debra — John refuses to leave her bedroom even after she makes it clear she’s uncomfortable making their way there on the first night. And when he finally does leave, he does so in a huff, obviously angry that he’s not allowed to stay the night. She’s not a fan of this behavior, and says so to her co-worker. But after John calls her up apologizing and telling her that she deserves better, and then politely declines to even come inside after their next date, she's keen to give him another chance. And the truth is, that's how many of us might have proceeded.

More seeds of concern are planted even after Debra and John’s relationship becomes more serious — the pairing is moving dangerously quickly, as made abundantly clear by jarring timestamps placed strategically throughout the pilot. John shows up to a black-tie benefit still dressed in scrubs, claiming he had no time to change, but suggesting to viewers that he doesn't have the cash to rent the fancy tuxedo he talked about. He tells her that he loves her, and you can see that she's ready to claim the happiness that her therapist tells her she deserves. She does deserve it, and so she accepts it without asking too many questions. In another situation, this would be a good thing.

No one sets out to purposefully date someone who’s predatory — abusive partners often excel in lulling their targets into false senses of security.

Veronica claims she sees John walking around the house noting all their expensive belongings, as if he’s taking inventory. And when John says his money is tied up in tax issues and child support from a previous marriage, Debra is the one footing the bill for the high-end condo space he’s just dying to have. But despite the tension it causes between Debra and her daughters, she turns a blind eye. She’s happy and feels loved for the first time in who knows how long, and the comfort of that feeling isn't an easy one to let go of.

Debra isn’t some kind of oblivious, naive woman with no regard for her own safety. She actively takes precautions on her first date with him — they walk to their destination so she won’t be getting in a car with a stranger, and they go to a restaurant where she’ll be around people she knows. To paint her as someone who “should have seen the signs" would be to tread dangerously close to victim-blaming, and would negate the very valid experiences of both men and women who unexpectedly become entangled in abusive relationships.

No one sets out to purposefully date someone who’s predatory — abusive partners often excel in lulling their targets into false senses of security. And having an open, trusting heart like Debra's isn’t something anyone should be criticized for, even if it's easy to wish from afar that she'd get out of the situation. It's not easy to feel like you've found your soulmate, and begin planning a life with them, only to soon start seeing the frays in their facade. Dirty John is a painful reminder that it's often the ones who sweep us off our feet that have the most power to harm us, and that even the most capable people in our lives aren't always immune to predatory people.