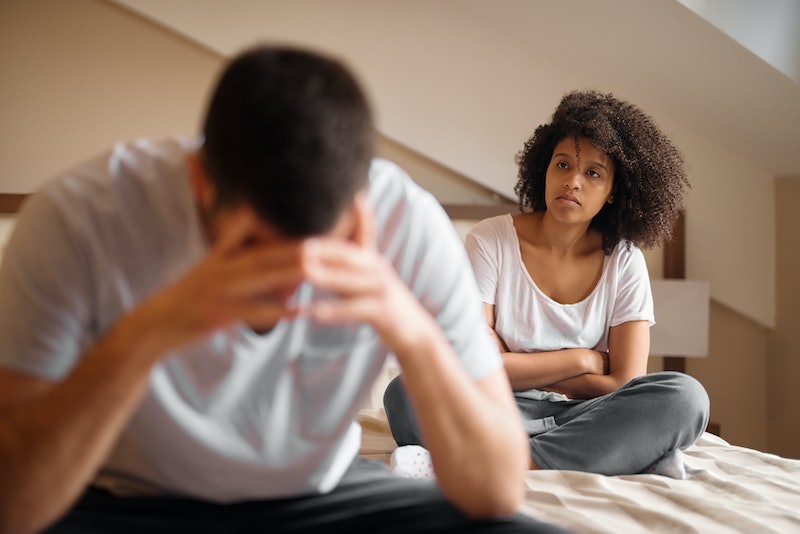 The average Mercury retrograde period is only about three weeks long — but believe you me, a lot can happen in just three short weeks. In fact, nothing can make three short weeks feel like three long millenniums like a backspinnin' Mercury. Unfortunately, we're in for one of those long millenniums soon: Mercury retrograde summer 2019 officially started on Jul. 7, and it lasts all the way through the last day of the month. This three-and-a-half week run gives Mercury plenty of time to chop our lives into bits.

A lot of people dread these regularly-occurring transits, and I get why — they can be a huge pain, cause they kinda sorta turn our ability to communicate, commute, and use technological devices into total mush. No fun, especially for a busy-ass, phone-addicted, always-on-the-go millennial, eh? During a Mercury backspin, it's always best to avoid signing contracts, planning any major trips, or starting new projects. But, what does it mean if you break up with a partner during Mercury retrograde this summer? Mercury can definitely wreak a lil' bit of havoc in our love lives, too.

Mercury rules over all things communication, so you can expect your ability to clearly express and perceive feelings or ideas to be totally off kilter. Misunderstandings, accidental text messages, and breakdowns in scheduling are all the norm during Mercury retrograde. Given these struggles, it's not unlikely that you might find yourself facing difficulties in the romance department. "With communication going haywire, Mercury retrograde can really mess with romantic relationships, family dynamics and emotions in general," explained Horoscope.com on its site. "If you're on the fence about someone, whether a potential breakup or hookup, Mercury retrograde might not be the best time to commit either way."

Healthy relationships are built on trust and communication, so if those areas are feeling clouded, confusing, and unclear, you're more likely to question things, act in haste, or completely misinterpret situations — and obviously, worst case scenario, this could wind up concluding with a Mercury retrograde break up.

Bustle spoke with astrologer Lisa Stardust, who weighed in on the likelihood and significance of breaking up during a backspin. "Unfortunately, Mercury retrograde forces us to reevaluate situations and relationships," she shares. "Feelings that have been pushed to the bottom of our hearts and minds can resurface, which can lead to us expressing sentiments that have been bottled up for a while."

But if we're using a retrograde wisely, it means we're taking a pause from the usual hustle n' bustle of our daily grind to reflect on where we're at and what we want — and sometimes, this might lead us to question whether we're with the right partner. This is totally OK! We should be willing to face our true feelings and express them.

But recognizing feelings is one thing; acting on them is another. Is Mercury retrograde the right time to make major moves? Obviously, you'll need to follow your heart, but keep in mind that any serious decisions made under Mercury retrograde's spell might not feel the most stable moving forward. "Sometimes [ending a relationship during Mercury Rx] means the break is permanent. Other times it means both parties wobble back and forth," explains Stardust. "The one thing that is common is that the conversation regarding the breakup won’t be over so fast. It may go on for a while, even years." Retrogrades can be messy, so don't expect a clean break, if that's the route you take.

Even if you're aware of allowing your retrograde-fueled feelings to simmer a bit before making a hasty decision, that doesn't mean your partner is. This particular transit may be hitting them harder than you, so prepare for even the most well-thought-out communication on your end to fall on deaf ears. "Some people are selfish as f*ck," explains astrologer Danny Larkin to Bustle, regarding Mercury Rx break-ups. "You can explain it over and over again, but if Mercury retrograde is hitting their chart, they aren’t gonna get it. So just cut your ties and upgrade to someone that’s handling the retrograde better."

All things considered, retrogrades bring our crap to the surface, and sometimes we're forced to face real feelings that we've been trying our best to run from. Mercury retrograde break-ups, in that sense, might indicate the cutting of a cord that should have happened long before. The problem is that, even if that is the case, there's a good chance feelings will shift once Mercury goes direct again in August. "[It] may be hard to emotionally detach from the relationship," warns Stardust. "Sometimes it means both parties reconcile later on — but not necessarily in a romantic sense; they could wind up just being friends." Either way, give yourself some leeway. Your mind will feel so much clearer once the retrograde is over, so allow your feelings to take shape, communication to strengthen, and be willing to re-evaluate your choices once Mercury goes direct.