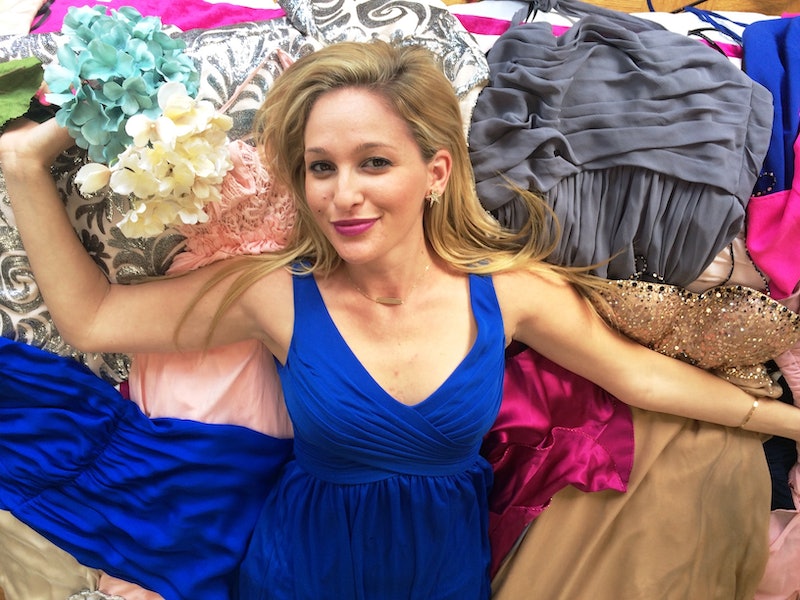 Jen Glantz threw pockets of the internet in a tizzy in 2014 when she posted an ad on Craigslist advertising her services as a professional bridesmaid. Weird as many thought the idea was, it clearly struck a chord. Not only did the post go viral overnight, the interest propelled Glantz to officially start her company, Bridesmaid For Hire.

Now, two and a half years later, Glantz is like Olivia Pope, just more focused on white dresses than the White House. She has served as bridesmaid-slash-wedding fixer for dozens of strangers, solving any problems ranging from hungover groomsmen to broken jewelry. That work has earned her more than a closet overflowing with gowns; she has accumulated new friends, unbelievable war stories, and tons of useful insight.

After innumerable demands to hear about her unusual job, Glantz decided to share her crazy journey and the lessons she’s learned. Her new book, Always a Bridesmaid (For Hire): Stories on Growing Up, Looking for Love, & Walking Down the Aisle for Complete Strangers, tells the endearing and inspiring tale of how she took an unexpected path to go from poetry major to CEO. And yes, there are shocking, movie-worthy moments along the way.

“I posted the ad one night, not really knowing what would happen,” Glantz tells Bustle. “I didn’t know much about business, but I knew when you started something, you had to test out your idea.”

That test paid off. In less than a day, the media was filling her voice mailbox and her inbox was brimming with responses from eager brides. Glantz had to take action quickly.

“One of the best things I did was I didn’t hold onto this idea very long,” she says. “I didn’t sit there and think about it for a month and make a business plan. I had an idea, I put it out there into the world, and I saw what happened.”

That kept Glantz moving forward, and with the help of her octogenarian business coach, she soon learned to embrace failure. Falling flat on our faces isn’t something she thinks we should fear; instead, we have to learn how to do it in a controlled way.

“When you’re falling toward the ground, have some kind of backup plan,” she says. “Don’t let yourself just give up.”

Glantz has succeeded in failing, like introducing new packages at the wrong price point, for example. By reacting quickly, she was able to correct any errors and continue to add new ones. Over time, she went from working only for brides to offering packages for mothers of the bride, maids of honor, and other bridesmaids as well.

With all the stress that weddings bring, some of her clients can get a little crazy. One time, a fight between and a bride and her mother got so out of hand that Glantz describes it as being “like a Jerry Springer episode.” It culminated in the three of them being kicked out of a New York City Starbucks.

One time, a fight between and a bride and her mother got so out of hand that Glantz describes it as being “like a Jerry Springer episode.”

That isn’t the most dramatic experience she has had on the job, though. At a recent wedding, the bride pulled Glantz aside five minutes before walking down the aisle to drop a huge bombshell: She admitted she didn’t even like her groom or want to get married.

“My whole body was shaking. I thought by now — I’ve been doing this for two and a half years — I’ve seen it all, I’ve heard it all,” Glantz says. “And here I am, looking at her in complete and utter shock.”

“My whole body was shaking. I thought by now... I’ve seen it all, I’ve heard it all. ... And here I am, looking at her in complete and utter shock.”

Yet, Glantz came up with a solution quickly. She asked the bride to have a 10-minute conversation with the groom, and then if she truly couldn’t go through it, they’d escape via Uber and get pizza. The bride agreed, and when the time was up, she and her fiancé decided they’d rather marry each other and ultimately divorce than call it off in front of 200 guests.

It’s weddings like that one that remind Glantz that being single is OK. “Too many couples I see settle. They don’t marry somebody who’s correct for them,” she says. “I never want to be walking down the aisle, thinking, ‘OK, I don’t know how I feel about this.’”

Fortunately, Glantz also gets to share in a lot of beautiful, joyous moments, including witnessing happy-tears-inspiring vows. Her job is always an adventure, especially as Bridesmaid For Hire continues to grow. Glantz is no longer her company’s sole bridesmaid, and her business has attracted 1,500 job applicants since the early days. Now, she even offers a training program for women hoping to start their own professional bridesmaid businesses.

“My hope is to empower more women to create their own opportunity,” she says, pointing out that you sometimes have to make your own.

As for her future, Glantz doesn’t think there’s an age cap on what she does, especially not after recently being in a wedding party with a 60-year-old bridesmaid.

“I just want to keep working weddings for as long as I can get down on the dance floor,” she says.

Even then, she probably won’t have seen and heard it all.

More like this
Kendall Jenner Thinks Tristan Thompson "Wanted To Trap" Khloé With Another Baby
By Jake Viswanath
Constance Wu On Self-Doubt, Family Drama, & Her Sister's Unwavering Support
By Constance Wu
Alan Rickman's Diary Reveals Why He Considered Leaving 'Harry Potter'
By Darshita Goyal
Everything Prince Harry Is Likely To Address In His "Wholly Truthful" Memoir
By L'Oréal Blackett and Sophie McEvoy
Get Even More From Bustle — Sign Up For The Newsletter