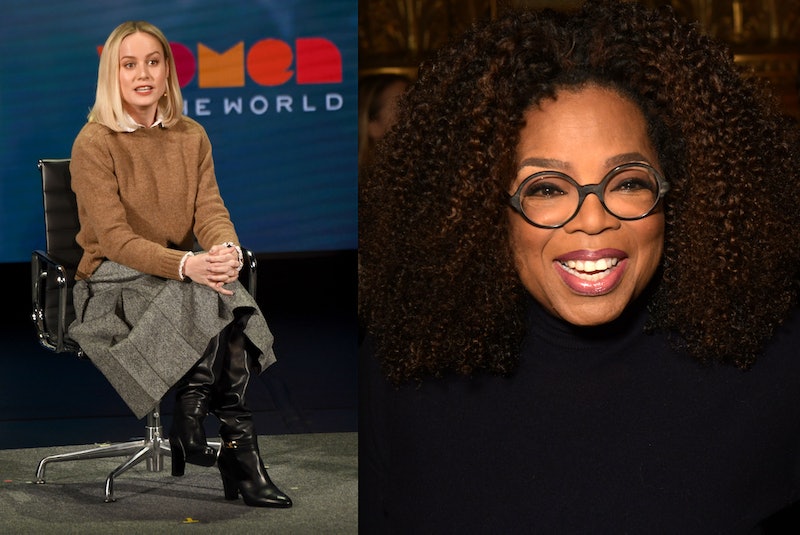 While Gretchen Wieners may not have been able to make fetch happen, Tan France certainly made the French tuck happen. In fact, Brie Larson taught Oprah how to French tuck thanks to the tips she learned from France himself on Queer Eye. The video is going to make fans of both the style guru and show so happy.

Queer Eye's popularity is no secret. The hit Netflix series just debuted its third season, but according to Refinery29, the show could have already been renewed for a fourth and already be casting in a brand new location. Given its popularity, it makes total sense that two mega-stars like Brie Larson and Oprah Winfrey could bond over one of the members of the Fab Five. That's exactly what they did backstage at the Women In The World Conference.

In a video posted by Winfrey, she and the Captain Marvel actor met backstage. Before Larson left, Winfrey complimented her "half in, half out tuck thing." Larson quickly responded, "Oh yeah, I learned that from Queer Eye. The Fench tuck! Come on, you've got to do the French tuck!" Larson goes on to ask Winfrey if she watches Queer Eye, and her friend Gayle King responds that she does. Larson then cites Tan France as the reason she knows everything about the French tuck.

Just in case you're not familiar with the French tuck either, the style is when you tuck in a small portion of the front of a shirt into your pants, skirt, or whatever bottom you may be wearing. After season two of Queer Eye, the look kind of became France's thing. In an interview with ABC News just a few days after the premiere, the style guru said he had been flooded with people tagging him in photos. He added, "[Now] it's everywhere! And people keep stopping me in the street and saying, ‘I'm French tucking for you!’ I'm like, great! That feels wonderful!"

Now, France can add Winfrey and Larson to the list of people who have shown their love for the style on social media.

But has France heard about the love from Winfrey and Larson? According to his Instagram account, he has, and let's just say he's excited. The Queer Eye star reposted Winfrey's video to his personal Instagram account and added the caption, "O👏🏽M👏🏽F👏🏽G!!! Now THIS is the best way to start the fucking day! 😭Now let’s see if @oprah will let me French tuck her, IRL!! 🙏🏾"

Will France get his wish to teach Winfrey how to French tuck in real life? Never say never. After all, the stylish member of the Fab Five has dressed celebrities like Pete Davidson and Hasan Minhaj. Why not Oprah?

Regardless of whether or not France and Winfrey will ever team up, the style guru has clearly made an impact on the world of fashion, and as others have said, maybe the looks should really be named the France tuck.