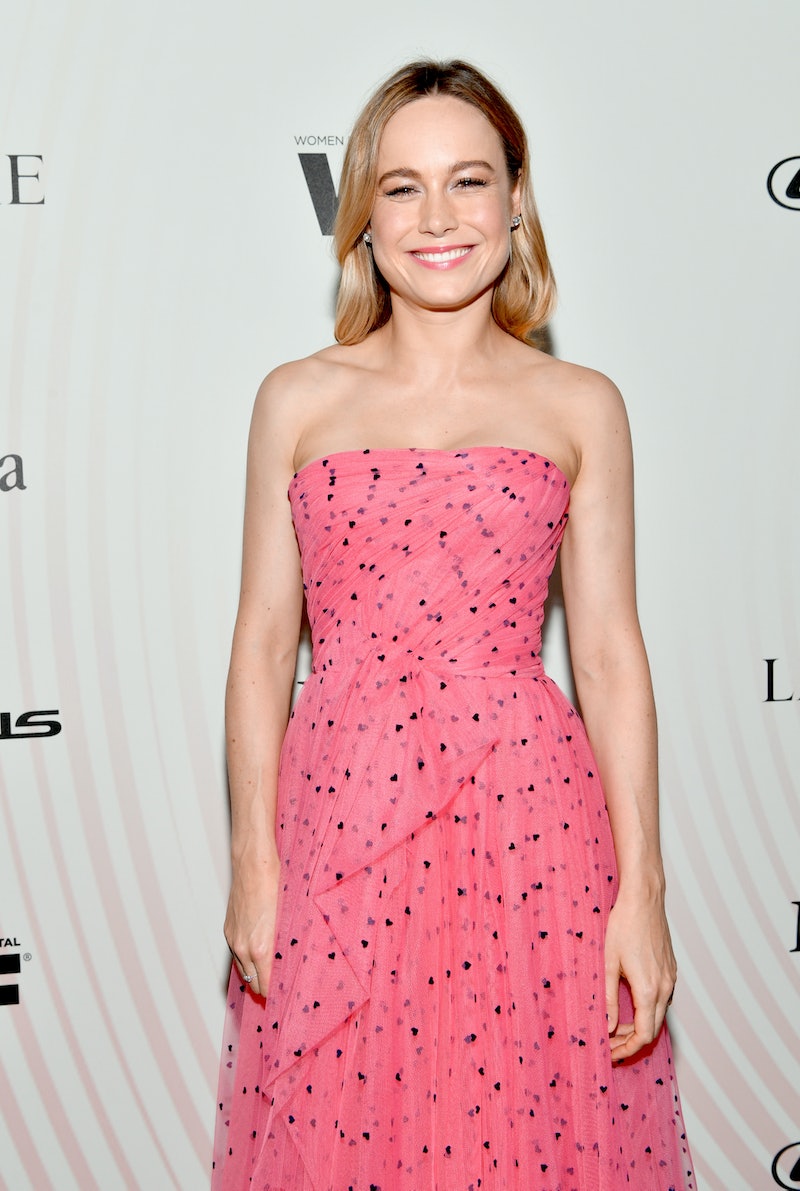 Captain Marvel's impending March 2019 release is still a ways off, but it sounds like dogged MCU fans are already counting the days. Turns out, the film's titular superhero — or, her real-life counterpart, anyway — is equally excited. Brie Larson celebrated wrapping Captain Marvel with perhaps the sweetest, most appropriately playful tweet MCU enthusiasts could've asked for.

That's right, filming for Captain Marvel has officially wrapped. At least, it sure looks like it has. Larson's recent tweet, which the actor sent into social media cyberspace on Sunday, July 8, appeared to confirm that she had completed filming on the next big step in the MCU. That being said, beyond the tweet's conceivable straightforwardness as to Larson's shooting schedule, it doesn't offer any more insight into the film. As Marvel aficionados know already, the studio hasn't released a ton of details about its upcoming female-driven superhero flick just yet; so pretty much any relevant tidbits of information, at this point, are duly appreciated.

Suffice to say, the weekend's Captain Marvel update felt like a pretty big one. That makes sense, since news that filming has wrapped means eager fans are one step closer to watching Carol Danvers' (AKA Captain Marvel) much-anticipated origin story play out onscreen, even if it is almost a year away.

Interestingly enough, Larson didn't use words to share the movie's wrap date with her Twitter following. Instead, the actor (who plays the film's title character) unveiled the exciting Captain Marvel milestone with a photo of Captain Marvel's clapperboard (riddled with signatures, presumably from the movie's cast and crew) laid atop a DIY-looking calendar page that includes the last two weeks of June and first two weeks of July. Appropriately, given the plot of Captain Marvel, the calendar touts a medley of colorful, outer space-themed doodles. (See the mini cartoon rendering of Captain Marvel piloting a space ship near the bottom of the page.)

Aesthetic merits aside — though, rest assured, there are many — Larson's crafty calendar also served a practical purpose, which basically boils down to the contents of the grid square marked July 6. While the other days bear respective red X's to denote their passing, this particular day is boldly circled and takes center stage in Larson's photo. Of course, that's for good reason, since the box marked July 6 also reads "LAST DAY" in bold print. And, just in case that didn't get Larson's point across clearly enough, July 7 is clearly marked "HOME." The tweet racked up nearly 100K likes in less than 24 hours, and fans are excited, to say the least.

A few weeks ago, Larson's Captain Marvel co-star, Gemma Chan, seemed to confirm that filming for her character had wrapped, too. Captioning a photo of herself flashing a notably fierce, over-the-shoulder gaze toward the camera from the Captain Marvel set, Chan tweeted, "Thanks for the ride," and finished off the message with a slew of hashtags, including "#thatsawrap."

With Captain Marvel's theatrical release still months away, there's not a whole lot of material out there for excited MCU fans to obsess over. That being said, based on what we do know about the film so far, it certainly sounds like the movie is going to deliver something special — and not only because it's the first time Marvel has given a standalone movie to a female superhero. As Marvel Studios' president Kevin Feige told Variety back in April, "You're gonna get the most powerful superhero that we've ever introduced, with I think one of the most unique and inspiring origin stories."

So, mark your calendars, folks. Because come next March, Captain Marvel fans will finally get to see the character's origin story play out on screen. Seven months is still a pretty long time to wait, but if Captain Marvel does in fact prove itself as inspiring as Feige promised, it certainly seems safe to say it will have been worth the wait.