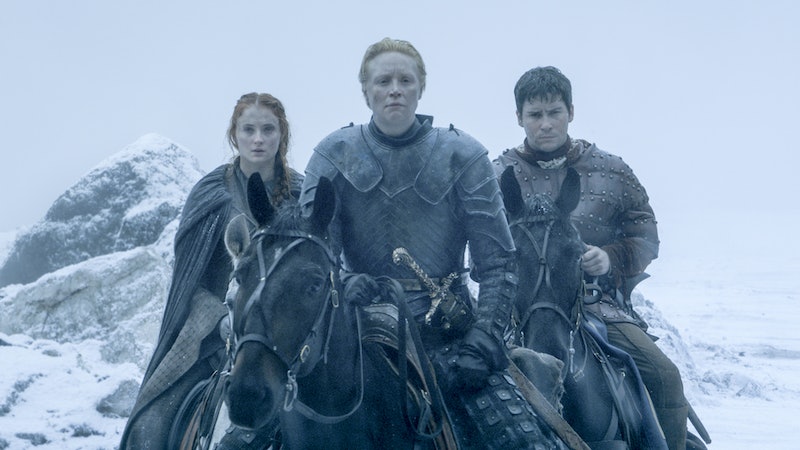 You know that super fun dragon show with all the naked scenes and the twins who have a very inappropriate relationship with one another? Yeah, most of it's based on real life. Or rather, George R.R. Martin has drawn inspiration from a whole lot of actual historical events for A Song of Ice and Fire. He then lightly sprinkled some dragons and zombies on top to create one of the most complex, addictive, and all-around brilliant fantasy epics of all time.

Martin has been perfectly upfront with the fact that the basic plot of A Song of Ice and Fire (minus the zombie dragons) is a loose, high octane retelling of the English War of the Roses, with some other world history and fantasy elements thrown in for flavor. The actual war also featured a number of fancy families going head to head in a bloody battle over a very special chair. But the royals gunning for the throne weren't the only important players in the generations-long conflict: one warrior woman was so influential that you've probably heard of her, even if you haven't heard of the War of the Roses or the Hundred Years' War or any of the other silly wars that England got itself into.

Yes, Joan of Arc was a key player in the history that Martin's pulling from, and she has a pretty clear parallel in ASOIAF.

Of course, Brienne of Tarth and Joan of Arc are not a perfect one-to-one match: Joan was a low-born farmer's daughter, and Brienne was born to a noble, if fairly minor, family. But both of them are fierce fighters in a world of men, both follow a strict moral code, both are frequently called "maid" or "virgin," and both end up playing a big part in a pivotal political struggle.

The real Joan of Arc, sometimes called the Maid of Orléans, was born to poor farmers in France around the year 1412. Two years later, the English King Henry V decided to invade her country. Officially, he claimed that France was rightfully his because of some boring family tree drama, but mostly he jut wanted to prove himself as a super badass king. See, Henry's daddy had not-so-legally swiped the English throne from the previous king, Robert's Rebellion style, so Henry really needed the English to stop bickering over who should sit on the (iron) throne and re-focus on England's other favorite past-time: bothering France.

By the time lil' Joan was coming of age, France was a big hot mess. Henry V married a French princess, but then he up and died, leaving his baby son, Henry Jr., to rule England. Naturally, France decided to take advantage of the baby king and rebel against English rule, declaring their own heir to France's throne. In the midst of all this, young Joan started to see things. She had strange religious visions, visions that told her she would be the savior of France.

So, at age 17, Joan gave herself a cute bob, put on some men's clothes, and went off to meet Charles VII, the French heir to the throne.

Joan quickly became Charles' right hand woman. Joan's obsession with putting Charles on the throne was more fueled by her religious fervor, whereas Brienne has more of a single-minded obsession with knightly honor, loyalty, and keeping her oath to Renly. But either way, both warrior women wound up dedicating themselves to kind of useless royal men.

In Joan's case, she successfully led the French forces to victory during the Battle of Orléans, fought Charles' war for him, and completed her mission of seeing Charles crowned king. But then, of course, Charles sent Joan to fight off an attack from the scary Burgundians, and Joan was thrown from her horse and captured. The English bought Joan from the Burgundians as a high profile prisoner of war, and spent months and months torturing and interrogating her before finally burning her at the stake for being a heretic, a witch, and a cross-dresser.

And during all that time, Charles did nothing to try and negotiate for Joan's freedom. Never mind that she had secured France for him and made him a king. Never mind that she would happily give her life for his. He only had her cleared of charges and declared a martyr after she was safely dead at the ripe old age of nineteen.

Maybe Brienne should be grateful that Renly beefed it from shadow magic before she could win the crown for him, too.

Joan of Arc isn't the only basis for Brienne's character by any means. Martin himself has said that he was inspired less by Joan than by the fierce queens of Scottish history, Eleanor of Aquitaine, and Xena the Warrior Princess. Brienne's a refreshingly original fantasy warrior babe, too, in that she's not a pin up gal in a metal bikini, but a large woman with normal armor and a practical haircut who can still kick some serious ass.

But whether the parallel was intended or not, Brienne mirrors the most tragic part of Joan's story: she has a tendency to latch onto to kind of sketchy royal dudes (and sometimes ladies), and use her far superior talents to fight their battles for them. She, too, is driven by her ideals and her beliefs to the point of ignoring her actual reality. But let's hope that she, unlike Joan, starts to fight for herself at some point... or she might be headed for the same tragic end.