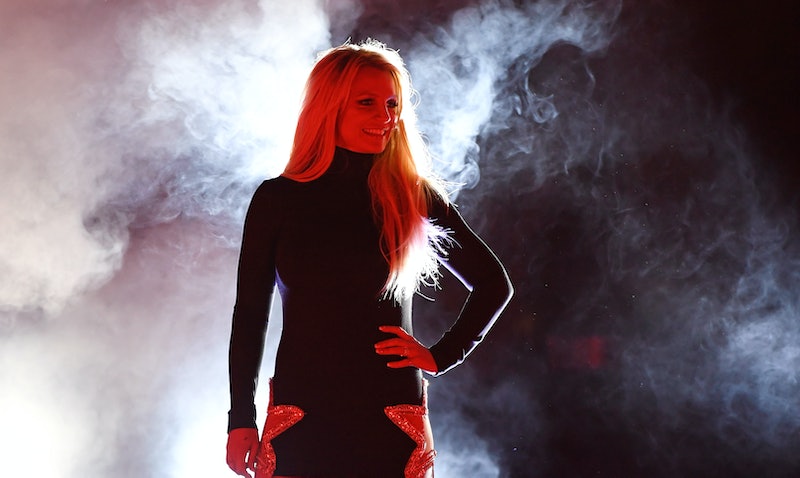 Britney Spears has been taking time away from the spotlight to focus on her mental health. But on Tuesday, April 23, Spears gave fans an update about how she's doing on Instagram. Before that post, the last social media update from Spears had been on April 3 when she wrote, "We all need to take time for a little 'me time'" with a smiley face. At that time, outlets like Variety confirmed that Spears had checked into a mental health facility, following her father's health issues and her decision to indefinitely postpone her Las Vegas residency show Domination.

Ever since then, there's been a range of rumors about Spears' mental health and well-being, but based on her Instagram post and video, she wants people to know that she's still focusing on herself and wants people to give her privacy at this time. In her Instagram video, the singer gave a brief personal update:

"Hi guys. Just checking in with all of you who are concerned about me. All is well. My family has been going through a lot of stress and anxiety lately, so I just needed time to deal. But don't worry, I'll be back very soon."

The video caption went into more detail about the gossip surrounding her current status and how she would appreciate space so that she can focus on herself. "My situation is unique, but I promise I'm doing what's best at this moment," Spears wrote. "You may not know this about me, but I am strong, and stand up for what I want! Your love and dedication is amazing, but what I need right now is a little bit of privacy to deal with all the hard things that life is throwing my way. If you could do that, I would be forever grateful. Love you."

Spears' IG update addressed the "rumors," "death threats," and "crazy things" that are being said about her. Currently, there's a fan movement called #FreeBritney, which as Entertainment Tonight reported, began after an anonymous source claimed to the podcast Britney's Gram that she had been placed into the health facility against her will. (Bustle previously reached out to Spears' rep for comment on the #FreeBritney rumors.) "I am trying to take a moment for myself, but everything that's happening is just making it harder for me. Don’t believe everything you read and hear," Spears wrote in her caption, seemingly clearing up all of that confusion.

The post also specifically accused Spears' former manager Sam Lufti of sending fake emails while pretending to be her years ago. According to Twitter, these emails have been circulating online among some of her fanbase. It's currently unclear which specific emails Spears was referring to and what the context of the messages was. Lufti denied the accusation on Twitter shortly after Spears' post. Meanwhile, The Blast reported that sources told the outlet that these emails prompted Spears to address her current situation.

Ahead of Spears coming forward herself, her younger sister Jamie Lynn Spears and her boyfriend Sam Asghari had spoken up for their loved one. As E! News reported, Spears was spotting stepping out of the treatment facility on Easter Sunday with Asghari, whom she has been linked to since 2016.

It will hopefully put fans at ease to see the beloved performer send her own message about her health. But the main point is that she wants the speculation surrounding her to end and that should absolutely be respected. And for now, it's promising that Spears is in a place where she thinks she'll "be back very soon" and when/if she is ready to enter the spotlight again, she'll have lots of exciting projects waiting for her — and a lot of dedicated fans happy to see her.