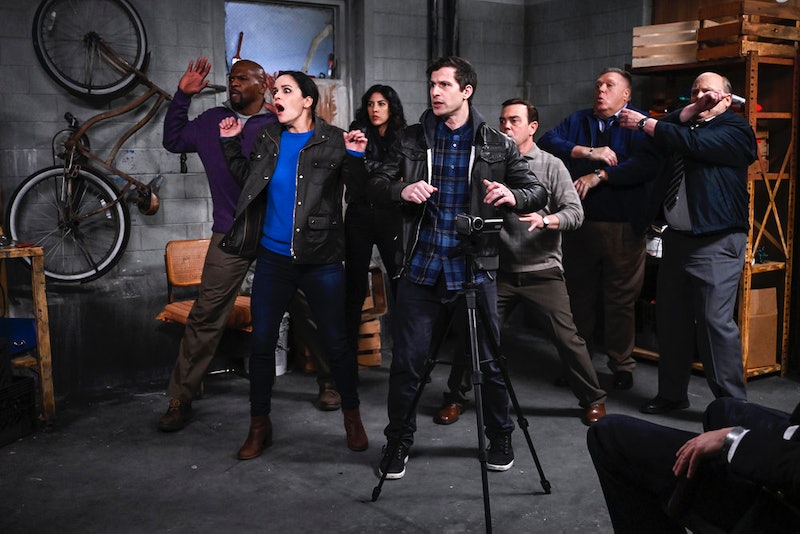 In the immortal words of Detective Jake Peralta, this news is "toit": NBC has renewed Brooklyn Nine-Nine for Season 8 three months before Season 7's February 2020 premiere. That's an impressive feat for a little show that fought for each and every one of its renewals at Fox before it was rescued from cancellation by NBC in 2018. Tracey Pakosta, NBC's co-president of scripted programming, shared the good news with the cast at a Season 7 table read earlier today, and the video of the Nine-Nine gang hearing the news was shared on the show's official Twitter account.

The cast — which includes Andy Samberg, Andre Braugher, Terry Crews, Melissa Fumero, and Stephanie Beatriz — are ecstatic in the video, which you can watch below. They also posed for a photo where the entire team tried to hold up eight fingers to represent the show reaching eight seasons, but in her excitement, Beatriz held up six fingers instead. When a Twitter user noticed her mistake and asked why she was holding up the wrong number, Beatriz's co-star Fumero came to her defense with an all caps tweet: "BECAUSE SHE IS VERY EXCITED ALSO WE CLEARLY DIDNT DISCUSS WHETHER TO DO 2 FOUR FINGERS OR 5+3 IT WAS ALL VERY EXCITING."

For NBC, bringing back Brooklyn Nine-Nine was an easy decision. The comedy struggled on Fox, but Season 6 flourished in the ratings for NBC earlier this year. Per TVLine, the show drew in an average of 3.2 million viewers, increasing it's overall viewership by 15%. That makes the show an integral part of NBC's comedy plan (and a potentially lucrative addition to their upcoming streaming service Peacock down the road.)

Before fans get to see Season 8, they have Season 7 to look forward to — and one major cliffhanger to be resolved. At the end of last season, Captain Holt was demoted by temporary commissioner Madeline Wuntch. He was last seen directing traffic, which is a big switch for the stoic captain who has led his squad through budget crunches and plenty of bad guy take downs. It's unclear how or when Holt will return to his old position, but thanks to the show's early renewal there will be plenty of time to explore how he handles his demotion.