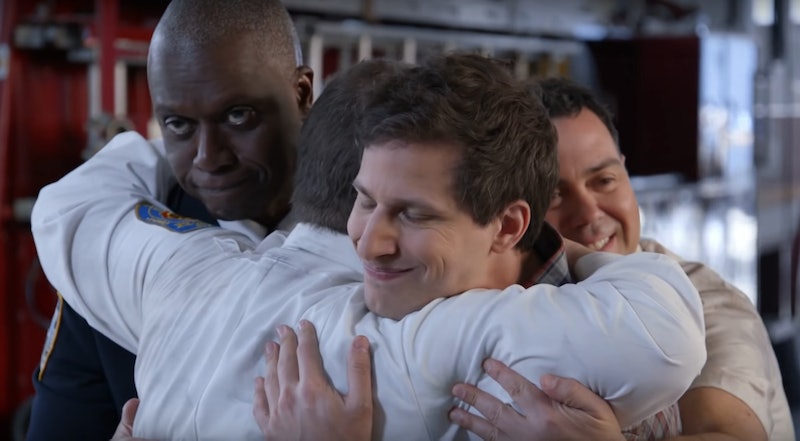 Two men. One objective. An endless number of fails, face-plants, and unrequited crushes. That, my friends, is the nutshell plot of the new Brooklyn Nine-Nine April Fools trailer, which was released on Monday, April 1. Jake Peralta (played by Andy Samberg) and Charles Boyle (Joe Lo Truglio) are looking for love in all the wrong places throughout the show's new rom-com trailer, which — spoiler alert! — isn't actually a film at all because — gotcha! — April Fools!

It's definitely kind of a cruel joke, seeing as how fans of the series would probably be super into a film focused on the antics of Jake and Boyle. Sadly, the faux rom-com — titled "Romance Is Hard," followed by the very ambiguous, "Official Trailer?" —  isn't a reality for now. The mock preview is still pretty fun to watch, though.

There doesn't appear to be any new footage in the trailer, but the way that it's cut makes the "movie's" fake storyline pretty darn believable. Well, it'd be believable if Jake and Amy Santiago weren't happily married. Just forget about that for the time being though, okay? Cool. Moving on.

"Romance Is Hard" opens with a voiceover from Sergeant Terry Jeffords (Terry Crews). "Jacob Peralta is my best detective," Jeffords announces. "He likes putting away bad guys, and he loves solving puzzles. The only puzzle he hasn't solved, is how to grow up," he adds.

As for Boyle? "Not the most brilliant detective," Jeffords explains, "but he works harder than anyone else. He's not physically ... gifted," he tells Captain Raymond Holt (Andre Braugher). These descriptions of Jake and Boyle are from the pilot episode, of course, but they do sound a lot like character introductions in a rom-com, don't they?

In the scenes that follow, fans see Jake and Boyle — "Two Cops. One Mission. To Find Love," according to the text throughout the trailer — getting denied, time and time again, by the many women in their lives. "Girls are so scary," Boyle concludes.

Then there's Jake, whose sequence starts with him asking Amy (Melissa Fumero), "Are you aroused by what a bad boy I am?" Silly question. Of course she's not (she definitely is). We also see him getting shot down while asking Rosa (Stephanie Beatriz) for her friend's number, and then getting dumped by Sophia Perez (Eva Longoria). "I'll never forgive that b*tch for what she did to you," Boyle vows.

Things get a little warm and fuzzy after that. A little. Kind of. Warm and fuzzy in an awkward way, as Jake and Boyle are prone to. After all, this is a two-fold love story — it's a story about two men trying to find love, and it's a story about a strong and enduring bro-mance between two cops. Cue the tears. So touching, so beautiful, so totally fake. Ugh.

There's a record scratch moment, some conflict, of course, emotions running high, and an eventual reconciliation. The trailer has everything you'd expect from a real rom-com, but, unfortunately, a real rom-com it is not. In the end, though, the final tagline in the faux preview is actually pretty spot-on, in terms of its two main characters: "They catch crooks. They catch feels." Indeed they do.

So, the bad news is that the whole thing will likely leave you wanting more. The good news, however, is that Brooklyn Nine-Nine comes back from its spring hiatus on April 11, so you won't have to wait too long to watch your favorite duo get into all kinds of antics — romantic and otherwise, probably.