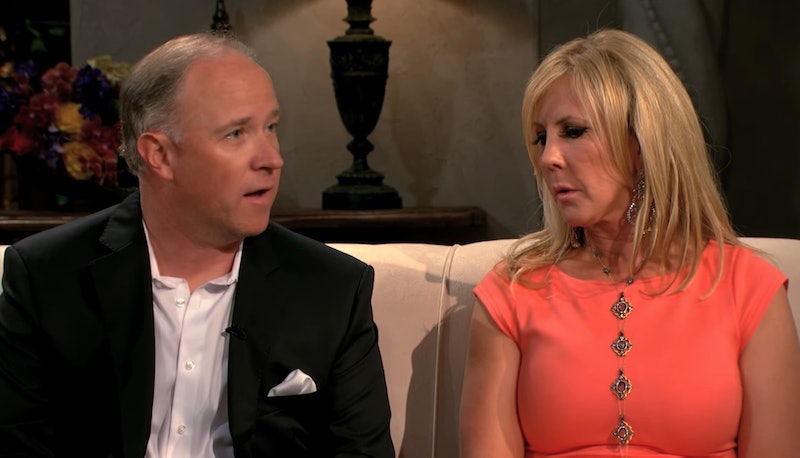 If you're a Real Housewives of Orange County fan, you better brace yourself. E! News reported Monday that Brooks Ayers is married. You read that correctly. Vicki Gunvalson's ex-boyfriend, who was accused of faking cancer and admitted to fabricating cancer documents, is now a married man. According to E! News, Ayers updated his Facebook relationship status Sunday to "married" and changed his profile picture to him wearing a tux and his wife, Christy Ayers née Groves Lindeman, in her wedding dress.

Ayers confirmed his big news to E! News Monday by saying, "I'm moving on with life. I've never been better." He continued, "It's amazing. Her family's amazing — they were there with us. My parents were there."

They said "I do" in French Lick, Indiana in a "small white chapel" after meeting about a year and a half ago, per E! News. "She's an amazing young lady and I'm a very fortunate guy," he said about Christy, who originates from Ohio and has a 23-year-old son. He also called her "quite the catch".

The newlyweds currently reside in Indiana, but they are planning to move back to Mississippi, Ayers' home state. This way they can be closer to his parents and adult children. "My world is completely different than it was almost three years ago, in a great way," he told E! News. Ayers also spoke about his wedding with Us Weekly Monday and gushed, "I’ve never been happier!"

Ayers' marriage is difficult for RHOC fans to swallow, to say the least, especially after "Cancer Gate". In Season 10, the women couldn't figure out if Gunvalson's boyfriend really had cancer like he claimed he did at the time. It led to a season of drama and former Housewife Meghan King Edmonds even investigated Ayers' so-called cancer diagnosis.

In November 2015, Ayers stuck by his cancer diagnosis, but admitted to E! News he faked certain medical documents about his alleged cancer battle. His statement to E! read:

It's still one of the most shocking and unforgettable RHOC moments. So, to hear that he's actually married, well, fans are in total disbelief.

Some people are, of course, questioning the legitimacy of his marriage.

According to Tamara Tattles, Ayers is now a medical sales rep in Indiana, which some can't help but laugh at.

"These Are Dark Times"

Some fans can't even stomach to send her congratulations.

It's A Lot To Take In

Is This Real Life?

How can this be happening, though?

This Sums It Up

That's how a lot of fans feel.

So far, it doesn't look like Gunvalson has responded to her ex-boyfriend's wedding news. As for Ayers, he doesn't want her commenting. He told E! News about whether or not he thinks he'll hear from the OG of the OC, "I hope not. I've moved on from all that drama for sure." Who knows if she'll react, but Gunvalson might be too busy with her new man, Steve Lodge, to even care. She's never seemed happier — and her daughter, Briana Culberson, likes him too.

It sure seems like both Gunvalson and Ayers have moved on from the cancer debacle and the rest of the drama he caused during his time on the show. As for RHOC fans, they'll never forgive Ayers or be happy for him.

More like this
RHOP’s Robyn Dixon Explained Why Juan Paid For Another Woman's Hotel Room
By Brad Witter
'RHOP' Stars Robyn & Juan Reportedly Got Remarried & Filmed The Ceremony
By Brad Witter
Rachel Fuda Gave Birth Just Weeks Before 'RHONJ' Season 13
By Brad Witter
Erika Jayne's Estranged Husband Tom Girardi Has Been Indicted On Fraud Charges
By Jake Viswanath
Get Even More From Bustle — Sign Up For The Newsletter
From hair trends to relationship advice, our daily newsletter has everything you need to sound like a person who’s on TikTok, even if you aren’t.