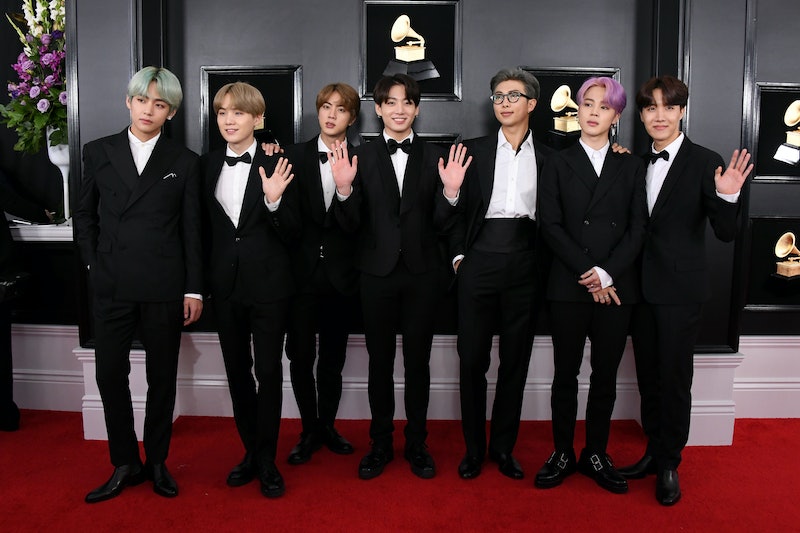 After six years of hard work, dedication, and near-constant travel, one globally-iconic K-Pop group is finally getting the vacay they deserve. On Aug. 11, the band's management company, Big Hit Entertainment, announced in a statement via Twitter (as reported by Entertainment Weekly) that BTS would be taking a break from performing for the next few months. Yes, it's a bummer, no doubt about that. Instead of causing a ruckus about the news, though, the BTS ARMY is actually being super supportive of their decision.

Shortly before the group's gig at South Korea’s Lotte Duty Free Family Concert, Big Hit revealed that BTS would "be going on an official and extended period of rest and relaxation" for the first time since they came on the scene. To reiterate: They have been working — pretty much nonstop — for the last six years. Can you believe they've gone that long without an extended vacay? Now *that* is commitment.

The statement went on to explain:

This period of rest will be an opportunity for the members of BTS, who have relentlessly driven themselves towards their goal since their debut, to recharge and prepare to present themselves anew as musicians and creators. This will also provide them with a chance to enjoy the ordinary lives of young people in their 20s, albeit briefly.

The announcement also had one simple request for fans during the band's time off. "Should you have a chance encounter with a member of BTS while they are on vacation, we ask that you show consideration for their need to rest and enjoy their private time off." Seems pretty reasonable, right? Wouldn't be much of a vacation if they got swarmed wherever they went.

Based on the way the ARMY has been responding to the news on Twitter, it appears as if they're more than willing to give the guys the space they need. "I’m surprisingly okay with this," @OliviaE49207028 wrote. "I feel like they deserve the rest considering they live their lives for other people. I hope this break refreshes them and makes them reach an ultimate level of happiness."

@omij22 added, "Yes bts are taking a break. Do you not want them to? They have been working their asses off!! They deserve it."

@ktaeofficial tweeted, "It’s nice that bts finally got their well deserved break. I hope no one bothers them."

Twitter user @whereshismother echoed the sweeping sentiment by commenting, "I literally haven’t seen a single tweet about people being mad at bts for taking a break we’re deadass out here celebrating their break."

Seriously, though — how great are their fans?

It's worth noting that Big Hit's statement was pretty clear about the fact that BTS's break wouldn't be permanent. At the end, it read, "BTS will return refreshed and recharged to return all the love you have and continue to show them." So, if you thought for even a minute that "break" equals "breakup" — well, that definitely doesn't seem to be the case.

Also, their website notes that they're already confirmed to play several shows in October as part of their "Love Yourself: Speak Yourself" world tour, which is yet another indication that they legit just need to chill for a bit. So, no need for alarm, guys.

What will BTS do while they're on vacation though, you wonder? Who knows. But wherever they go and whatever they do, it's definitely well-deserved.