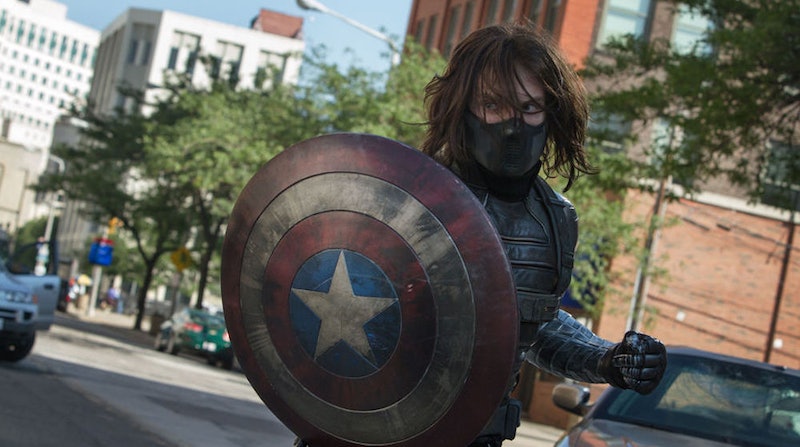 Bucky Barnes may be best known as Captain America's sidekick, but with Chris Evans reportedly leaving his role as Captain America after Avengers: Endgame, it seems like Bucky (Sebastian Stan) could pick up his friend's shield and continue on in his name. Marvel Cinematic Universe fans might already know this is an option, but how does Bucky become Captain America in the comic books and would that arc work within the MCU?

Bucky Barnes was first introduced as Steve Rogers' BFF in Captain America Comics #1 in 1941. The friends would take on bullies together in childhood. And they tried to enlist in the Army, but only Bucky was accepted into the 107th Infantry Regiment, where he was captured and brainwashed by HYDRA, becoming the Winter Soldier. It was during this time, though, that Rogers took on the role of Captain America and rescued Bucky from captivity.

The comics and movies have dealt with this differently, though: As reported by Screen Rant, Bucky's "demise and reanimation by Hydra in the movies and by the Soviets in the comics was a surprising move that flew in the face of Marvel tradition — it had been said that Bucky was one of the only characters in the Marvel universe that would never come back." Bucky was seemingly killed in Avengers #4, according to Screen Rant, but returned in 2005 when Ed Brubaker brought him back as the Winter Soldier (Captain America series Volume 5). This challenged the "Bucky Clause" that was previously joked about by fans and the Wall Street-Journal — the clause stating that no one could stay dead in Marvel Comics except for "Bucky, Jason Todd and Uncle Ben." So when Bucky seemed to disintegrate in Avengers: Infinity War, no one was really convinced we'd seen the last of him in the MCU.

In an 18-issue arc called The Death of Captain America, Steve Rogers is supposedly assassinated on the steps of the Lincoln Memorial. S.H.I.E.L.D. Executive Director Tony Stark reveals a letter Rogers sent him suggesting that in the case of his death, S.H.I.E.L.D. should both look out for Bucky, and continue Captain America's work. Bucky becomes Captain America — but instead of answering to S.H.I.E.L.D. like his friend, Bucky works independently and, as Screen Rant notes, "stops attempted hits on two presidential candidates, stops the Red Skull from placing a puppet in high office, and helps fight off an alien invasion by the villainous Super-Skrulls."

It's revealed in Captain America: Reborn that Rogers is not, in fact, dead; instead, he was trapped in a time continuum, reliving his past. Bucky is part of freeing him, and for a short time they work together, side-by-side, in Captain America suits, sharing the shield until Siege, where Rogers officially retires and hands the position off to Barnes full-time. But will this ever happen in the Marvel Cinematic Universe?

In 2016, Stan attended a Nerdist screening of Captain America: Civil War where he asked the audience if they think he should be Captain America. "You know, I was sitting there in a room with [Marvel] and basically they were saying to me that this is what's gonna happen: He's gonna be the Winter Soldier, and then eventually he's gonna become Captain America," Stan told the crowd, according to Nerdist. "And I was like, 'That sounds great,' but they weren't at any point telling me what they are gonna do. They still aren't."

But in 2018, the actor told Jimmy Kimmel he hadn't been officially part of any official discussion regarding his character becoming Captain America. "No. Not really, no," he said, per Screen Rant. "It's usually like you know, it's like the dream you know, just sort of people might mention something, but we never go that way."

In 2019, though, it appears this could finally be coming to fruition. Stan, has a contract for several more films (four, according to Nerdist). Interestingly, though, Disney+ just announced a new live action television show called Falcon and Winter Soldier, with Stan set to reprise his role and Anthony Mackie returning as Falcon, a character who also eventually became Captain America in the comic books as part of 2014's Marvel NOW! relaunch. Stan posted about the show on his own Instagram with the elusive caption "Ok." So with this project coming up, it certainly seems like he'll be remaining in Bucky's current role for a while.

Christopher Markus, co-writer of Avengers: Infinity War, has hinted that he doesn't believe Bucky Barnes should ditch Winter Soldier quite yet. "I will say, just on a fan level, I think Winter Soldier's so awesome that I'm always like, why are you wasting Winter Soldier and putting him in like Captain America outfit?" he told Screen Rant in 2018. "You had two heroes now you got one." It also appears that Bucky might be moving into his White Wolf of Wakanda storyline, as set up by the post-credit scenes in Black Panther. Sam Wilson (aka the Falcon), meanwhile, became Captain America in the comics much more recently, and his becoming the second black Captain America is definitely something fans are hopeful to see on the big screen. (The first was Isaiah Bradley, appearing in the 2003 limited comic series Truth: Red, White & Black.)

In 2014, Hypable reported that Marvel writer Rick Remender reminded fans that Captain America will always be around, and that means it won't always be Steve Rogers or Bucky Barnes or Sam Wilson any one else for eternity.

“I think that Steve himself realizes that there’s always going to be a Captain America," Remender said, per Hypable. "It’s an honor and a privilege to serve in that role, but no one man is Captain America.”

Bucky will always be the Winter Soldier, though: Marvel gave him his own mini-series back in September.