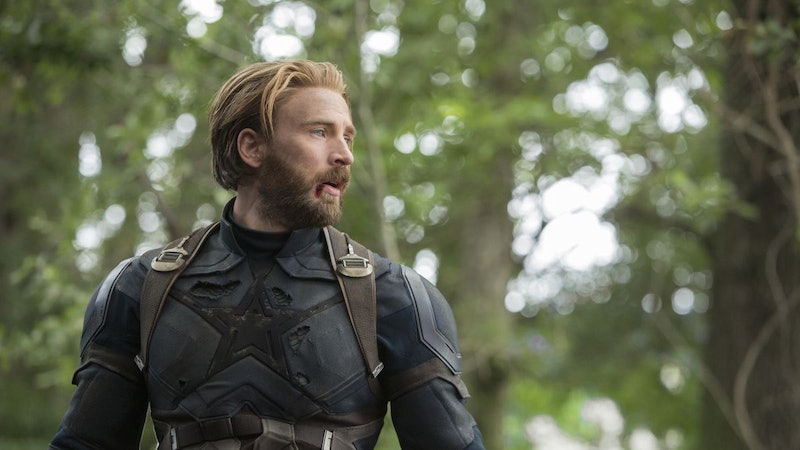 It might officially be time to worry about Captain America's future in the Marvel Universe. Chris Evans posted a goodbye to Avengers 4 that has fans convinced this upcoming film is the last time they'll ever get to see him play Captain America on the big screen. And after reading it, it might be hard to disagree with them.

On Thursday, Oct. 4, Evans took to Twitter to announce, "Officially wrapped on Avengers 4. It was an emotional day to say the least." But, it only got more emotional for fans who certainly read into his somber farewell. "Playing this role over the last 8 years has been an honor," he continued. "To everyone in front of the camera, behind the camera, and in the audience, thank you for the memories! Eternally grateful."

It was those closing lines in which Evans didn't just appear to say goodbye to the latest Avengers movie, but Captain America forever. Some even wondered if this was Evans teasing his character's fate. "Uh... spoiler alert?" a fan named @quintabrunson tweeted insinuating his goodbye is a sign he will die in the next movie.

Perhaps, though, it shouldn't be a spoiler that Evans is leaving for good after Avengers 4. He's already said his contract would expire after the Infinity War sequel, which hits theaters May 3, 2019. Earlier this year, he even told the New York Times he had no plans to return: “You want to get off the train before they push you off." Now from the sounds of his goodbye tweet, the train stops here.

After all, Evans told Rolling Stone way back in 2016 that Civil War was definitively "the last installment of Captain America" because he was kind of over wearing the suit. "Since 2010, I've never gone more than a year without putting that f*ckin' thing on," he told Rolling Stone.

Evans only extended his contract so that he could appear in Avengers: Infinity War and its sequel because he didn't want to be disloyal to the franchise. "I had six films in my Marvel contract, so I could have said after the third Avengers I was done, but they wanted to make the third and fourth Avengers films as a two-parter," he told The Telegraph last year. "They said they had so many other characters to fit in...and couldn’t get them all into one movie.”

It's why a fan named @mtthwjlbrks thought his supporters should be more thankful for what Evans did for us. "His contract was over with the first Infinity Wars movie," they wrote, "he did the second because he's a living angel."

While his previous statements are all clues that he's officially ready to stop playing Captain America, another sign is that Evans already has his post-Avengers projects lined up. But, he hasn't ruled out the possibility that he could return to the Marvel Universe one day — that is, if Captain America is still alive after Avengers 4. After all, it seems to be working for Hugh Jackman. “I’m not going to sit here and say, 'No more,'" Evans said in a 2017 interview with Collider about his future Marvel plans. "I think Hugh Jackman has made 47 Wolverine movies, and they somehow keep getting better."

It's why fans weren't so doom and gloom about the tweet. Evans retiring as Captain America was something they already expected. Many excited to see what Evans might do next. See, Captain America might be leaving the MCU, but Evans will be just fine. If anything, this means he'll have more time to sass President Trump on Twitter, fight off real-life Nazis, and tackle Kanye West's pro-Trump rants.

It's why fans offered some suggestions for what Evans could do next. "You know what else would involve a potentially eight-year commitment in which you would unite and lead a large, volatile group of diverse people against a common threat by representing the best of American values?" a fan named @TylerHuckabee tweeted.

While another fan named @rock_golf put it in even more explicit terms: "Presidential nominee Chris Evans, 2036."

While Evans hasn't expressed any future plans to run for office, it's clear that fans will be sad to see him hang up his shied — whenever that may be.