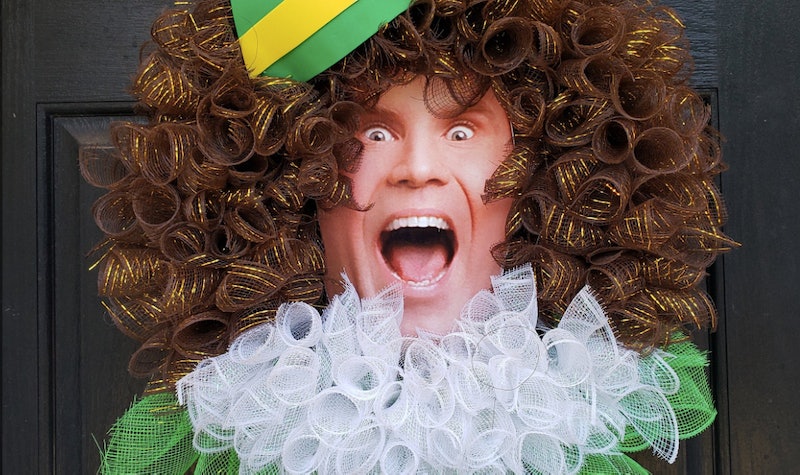 As every true fan of Buddy the Elf knows, there is no time-honored tradition more sacred than your annual Elf rewatch. Everyone's is a little different, ranging from stacks of candy served on noodles and syrup, mandatory Christmas pajamas, and, of course, the occasional Elf drinking game. But this year you can truly elevator an Elf viewing party before your guests even walk through the door with the Buddy the Elf wreath you can buy this holiday season.

The Buddy the Elf wreath is currently retailing on Etsy, in CustomDesignPress's shop, for $70 apiece. It features a photo of Buddy in full "Santa! I know him!!" mode, surrounded by festive wreath ribbons made to match his iconic look. It even comes with a little hat propped on the wreath's head. The handmade wreath currently has a production time of one week before it ships out, but you might want to go ahead and order now — considering how beloved Buddy the Elf has become since Elf's 2003 release, I'm betting that more than a few people are going to be ordering in advance.

Just be aware that this isn't a wreath that catches your eye; it's a wreath that full on happens to you. If you don't believe me, take a look at Buddy in all of his sugar-spiked glory.

Will Ferrell's Buddy has become such an icon since the film's release that we tend to get graced with his face every holiday season that has passed since. In 2018, the most memorable one by far was the Elf-inspired sugar cookie dough, which came in a precut pack of 24 cookies that each featured a cartoon of Buddy the Elf's hat. He's become enough of a phenomenon that you're actually somewhat limited in what you can't buy with Buddy's face on it — from pint glasses with Elf quotes on them, to Buddy the Elf Funko Pops, to an Elf party pack, featuring all the themed napkins, cups, and plates you need to throw the ultimate Elf party. And if you want to throw yours alone this year? You can even get in the mood with your very own Elf candle, which smells like "swirly twirly gum drops, the world's best cup of coffee, Francisco, syrup, a whole roll of Tollhouse cookie dough." Some Big Buddy Energy if there ever were any.

Interestingly, Will Ferrell had reservations about the now beloved elf he brought to life; he shared on The Late Late Show with James Corden in 2018 that early days of filming exteriors were awkward, and he worried that the film would either "be a home run or people are going to go, 'Whatever happened to you? Why did you do that one about the elf?'"

Well, that "one about the elf" has grown into such a classic that it is every dentist's worst nightmare and every holiday lover's dream. Now you can lean even further into it with your Buddy the Elf wreath — just be sure to order one while they're still around.

More like this
22 Movies On Netflix That Are Perfect For The Whole Family
By Bustle Editors
8 Epic Must-See Moments To Relive From The Lionesses’ Euros Win
By El Hunt
The 8 Best Chew Bones For Puppies, According To A Vet
By Andrea Hannah
25 Things I've Reduced My Life To, In Addition To WFH In My PJs
By Ginny Hogan
Get Even More From Bustle — Sign Up For The Newsletter