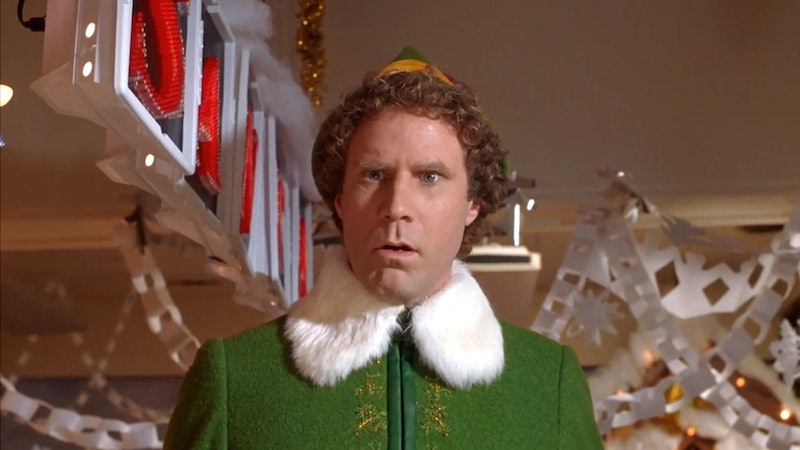 It's hard to imagine that anyone wouldn't love Buddy the Elf, but it turns out that there was actually a lot of apprehension in bringing the iconic Christmas character to the big screen. Will Ferrell was worried that filming Elf would ruin his career when the 2003 holiday movie first started shooting on location in New York City — and he wasn't the only cast member who had doubts about the film during the production process.

During a recent appearance on The Late Late Show with James Corden, Ferrell recalled the incredibly awkward early days of filming Elf on the streets of New York City. "The first two weeks of shooting were kind of all the exteriors in New York. So, [we were] still kind of discovering what this movie's gonna be and running around New York City in yellow tights," Ferrell recalled. "People [were] recognizing me from Saturday Night Live going, 'You OK? What's going on?'"

Ferrell even admitted that he spent a lot of time thinking that Elf would either "be a home run or people are going to go, 'Whatever happened to you? Why did you do that one about the elf?'" Thankfully, the film was an instant success, and in the fifteen years since its release, has become a staple of the Christmas season.

"It was just obviously one of those where the stars aligned and 15 years later, it's crazy," Ferrell said about the reaction to Buddy the Elf and his holiday hijinks.

But the comedian wasn't the only cast member who had hesitations about whether or not Elf would succeed; James Caan, who played Buddy's long-last father, admitted to Ferrell at the film's premiere that he was worried the performances would be too big to connect with audiences.

"He came up to me at the premiere — and it had gone great, people were like, 'Oh my gosh, this is going to be fantastic' — and he's like, 'Hey, I gotta tell you something. Every day on set I thought you were way too over the top, but now I see what you were doing. Great job,'" Ferrell recalled.

"I just love the thought that there we were, working every day, and he's going back to his hotel room going, 'Geez, get me out of this one.' That was fun," he added, laughing about his costar's hilarious confession.

Caan's apprehension makes sense considering how much of the film relies on Ferrell's performance — and even now, much of the cast agrees that it's because of the former Saturday Night Live star that Elf is as charming, hilarious and heartwarming as it ended up being.

"This was Will’s movie. He just has such a sweetness and innocence to him," Zooey Deschanel, who played Buddy’s love interest, Jovie, told Variety in an interview to celebrate Elf's fifteenth anniversary. 'He’s able to always go to that place of innocence that allows a character like this to really come to life."

Bob Newhart, who played Papa Elf, echoed Deschanel's statements, saying, "Will could have just come off as a stupid guy who doesn’t realize he’s a lot bigger than anyone else. There was a lot of danger in the fact that if the audience didn’t go along with Will’s persona, it could have been a big flop."

Despite delivering a performance that has delighted audiences for over a decade, Ferrell admitted in 2015 that he was surprised that Elf has become the Christmas classic that it is today. "It's surprising how each year it just gets higher and higher on people's lists. I wouldn’t have predicted that," Ferrell told Good Morning America's Lara Spencer.

"Running around the streets of New York dressed as an elf, I thought, 'This could be my last movie,'" he joked. "It went the other way, so I feel so fortunate. I feel so glad that that's become part of the lexicon."

Clearly, Buddy's love of singing loud for all to hear really has been the perfect way to spread Christmas cheer for the last fifteen years. Well, that and a plate full of candy and maple syrup spaghetti.