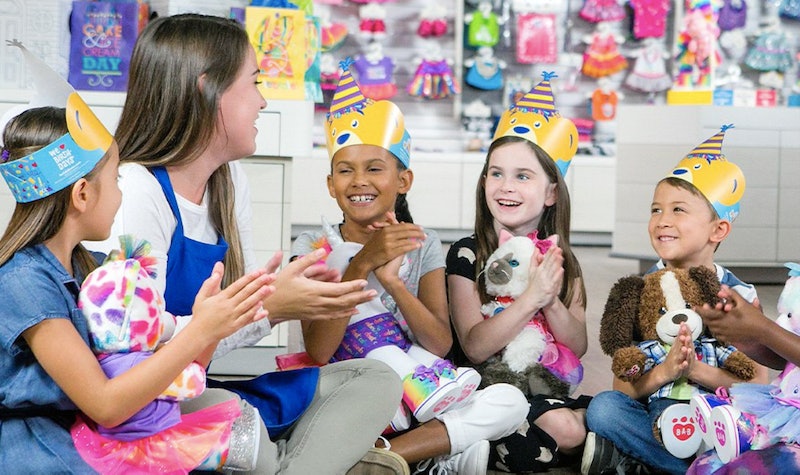 Mark your calendars, anyone who wants extreme brownie points with any of the kids in their lives: Build-A-Bear's "Pay Your Age" Day is back in 2019, and this time with new rules and a contest to boot. First, though, a clarification: Although Build-A-Bear is calling it a "day," the promotion will actually last select days from June 24 through June 28, giving customers a longer period to take advantage of it. And this year, rather than having customers line up at the door, the promotion will only be available through a lottery system that will ultimately give what the company expects over 200,000 customers a "Pay Your Age limited ticket."

Registering to get the ticket is a simple process — you can either log into or create a free Bonus Club Member account on Build-A-Bear's website, then create a Birthday Profile, which will then give you access to enter the lottery for a limited ticket. Customers who are granted a ticket will be informed on or around June 21 via email, according to the company, and will entitle the ticket holder to "make one furry friend per child present, limit two furry friends per ticket."

If you're a stuffed animal stan, odds are you were extremely aware of the Build-A-Bear "Pay Your Age" Day that the company held on July 12, 2018. The original concept was fairly self-explanatory — you'd go to Build-A-Bear, build your stuffed animal, and pay the equivalent in dollars to the years you'd been alive. While this wasn't exactly helpful to the average millennial — whose median age is about 31, according to Pew Research — it was a boon for little kids, who would be paying for a new furry friend with the equivalent of a few singles.

That said, the hype was, uh, a little too real. The promotion was so popular that, per USA Today, customers were lining up outside of stores long before they opened, causing crowding issues and safety concerns that prompted Build-A-Bear to abruptly cancel the promotion. The company reportedly handed out $15 vouchers that could be used by the end of August to those who didn't get to participate, but this did not prevent parents from flooding social media with posts about their disappointment in the event's cancellation.

Build-A-Bear CEO Sharon Price John also issued a public apology on the Today show, explaining the processes that went into creating the event. "There was no way for us to estimate the kind of impact, those kinds of crowds. It far surpassed anything we ever could have known. We did see it wind up in social [media] and we put a notice out for people that we thought the lines could be long, and we worked with the malls, but it was beyond anything we could have imagined," John explained. "It's heartbreaking. I'm a mom of three. I know that the most disappointing moment is when a kid is super excited and then something doesn't happen. There was no ill intent. Our objective at Build-a-Bear is to make kids happy."

It's this scenario that the lottery system aims to avoid, by giving the company an estimable number of guests to anticipate, and stretching the event out over multiple days to avoid too much crowding. Head over to Build-A-Bear's site to get yourself entered in the lottery — you might also be one of ten guests who wins a grand prize of a birthday party experience, and live the ultimate Build-A-Bear dream.