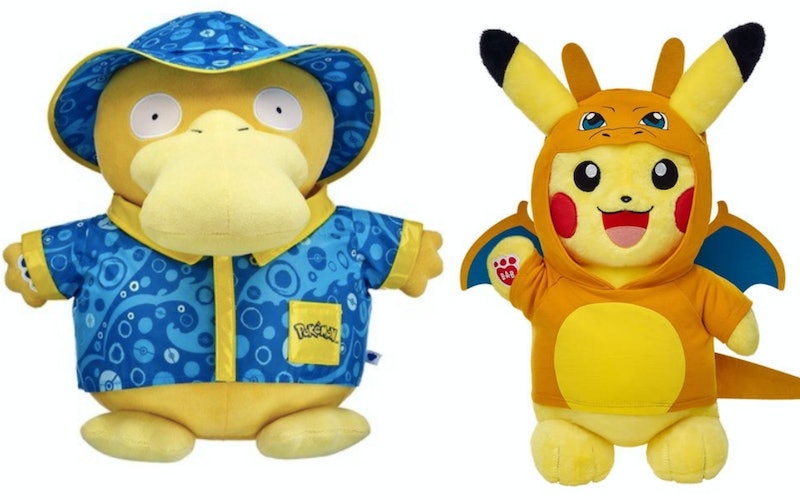 So, hey, fun fact, ‘90s and ‘00s kids: You can get Pokemon plushies at Build-A-Bear. To be fair, the collection is far from new; indeed, it’s been around in one way or another since around 2015. But in case you, like myself, have only just discovered it — and in case you, also myself, missed the addition of several new characters to the line this past spring — here’s the lowdown on this double dose of nostalgia.

Build-A-Bear Workshop first came on the scene in 1997. Inspired by suggestion made by a friend’s daughter while shopping for Beanie Babies, Clark — ready for something new after many years working on the business side of Macy’s and Payless ShoeSource — started working on a plan for a stuffed animal business that would allow customers to create toys precisely to their own specifications. The result was Build-A-Bear, which originally opened with just one store in St. Louis. The concept proved so popular, though, that the business quickly grew, first operating in larger cities before expanding to “smaller markets with good-size family communities and tourist destinations,” as Clark put it in Fortune in 2012. By 2004, the company had gone international — and although the business did suffer during the Great Recession (what business didn’t?), they’re still going strong.

Along the way, Build-A-Bear started carrying licensed products in addition to their own designs — and in 2015, Pokemon joined the stable. Coming up at about the same time as Build-A-Bear (the first two games were released for the Game Boy in 1996 in Japan and 1998 in North America), Pokemon's team-up with the plushie retailer was perhaps inevitable; equally inevitable was the fact that the first Pokemon-themed Build-A-Bear character to debut was the ever-popular Pikachu. According to the Bulbapedia, the Pikachu Build-A-Bear option arrived in December of 2015; so, too, did several items of clothing. More pocket monsters arrived at the make-your-own plushie retailer over the next several years, as well, among them Squirtle, Charmander, and Bulbasaur, and Eevee — and just this year, Psyduck and Snubbull joined the set.

And you can buy them online.

Bundles currently exist in Build-A-Bear Workshop’s online store for seven different Pokemon: Alolan Vulpix, Eevee, Meowth, Squirtle, Psyduck, Snubbull, and (of course) Pikachu. The plushies themselves are all between about 13 and 16 inches high, and, when purchased in a bundle, come with sound boxes, several items of clothing, and an exclusive Pokemon card that can’t be found in any regular deck. They run between $55 and $65 and can be ordered to arrive already dressed or waiting for you to dress them yourself.

But there’s some bad news, too: Right now, it looks as though the Pokemon Build-A-Bear bundles are only available online; the listings for each of the bundles term them as “online exclusives.” However, it’s possible that the characters might still be available in stores, even if the bundles are only available online. When Psyduck and Snubbull were announced in April 2019, for example, they became available in-store on May 3; they might therefore still be there in some locations, so if you want to build yourself a Psyduck (and who wouldn’t want to build themselves a Psyduck?), you can always give your local Build-A-Bear location a call and see if they’ve got the poor confused creature in stock.

There’s another stipulation with the online exclusive bundles, too, though: They don’t seem to be quite as customizable as some of Build-A-Bear’s other options. According to the product detail sections all of the plushies, they “cannot be purchased unstuffed, nor can stuffing adjustments be made.” The listing also goes on to note that “a scent cannot be placed inside this pre-stuffed item.” So, if your main interest in Build-A-Bear toys has to do with the actual making of each plushie, the Pokemon bundles may not be quite what you’re looking for. After all, Pokemon plushies are available in a wide variety of locations; if all you want is a stuffed Pokemon to snuggle with, you’ve got other options for how to make than happen than Build-A-Bear.

However, there’s still something to be said for the “dress up your toy” aspect of the whole experience, which Build-A-Bear does better than anyone. (It’s true that the Pokemon Center sells plushies of Pokemon — namely Pikachu — dressed up in various costumes, but the outfits aren’t usually fully removable and can’t typically be swapped from plush to plush, as they can with Build-A-Bear toys.) And when it comes to the Pokemon bundles, there’s even more to be said for being able to dress them up like, say, Pokeballs. Or, in one very specific case, other Pokemon.

Each online exclusive Pokemon Build-A-Bear bundle comes with specific outfits, you see. The Alolan Vulpix and Eevee bundles come with capes and pajamas. The Snubbull one comes with a vest and bows. Squirtle and Psyduck come with rain gear—a Pokeball slicker for Squirtle and a little blue raincoat and hat for Psyduck—as well as Pokeball hoodies (Squirtle’s is designed to look like an Ultraball, while Psyduck gets a Luxury Ball). Meowth’s bundle includes a Team Rocket hoodie and a Quickball hoodie. And Pikachu? Pikachu comes with a regular Pokeball hoodie… and a hoodie that makes the Pokemon look like a Charizard.

There is something about the idea of Pokemon dressed as other Pokemon that I just find absurdly delightful. It’s wonderful. I love it.

Anyway, the Pokemon bundles can all be found online at Build-A-Bear’s website; feel free to head on over there if you want to nab one for yourself. Or, y’know, to nab every single one. Gotta catch ‘em all, right?