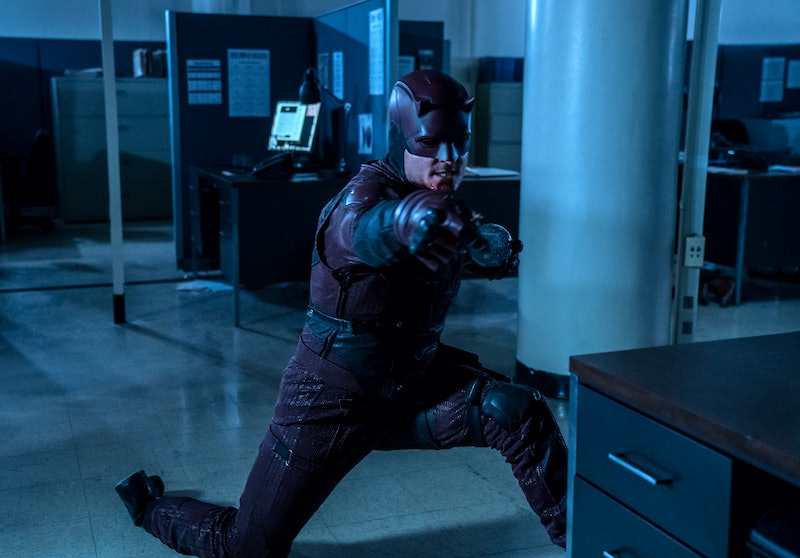 Besides Wilson Fisk's Kingpin, the most notable villain in the Daredevil universe is Bullseye and Season 3 of the Netflix series will finally introduce this Matt Murdock nemesis. Bullseye in the Daredevil comics is an unhinged assassin with super precise accuracy. He has been fighting Daredevil since he was first introduced in 1976's Daredevil #131, so there are various iterations of this character. No matter which version of Bullseye appears in the comics, his origins are usually rather mysterious. But Daredevil Season 3 is about to change all that by giving Bullseye a backstory worthy of his top villain status when it premieres on Oct. 19.

All the way back in the sixth episode of Daredevil Season 1, Bullseye seemed to briefly appear as a sniper for Fisk. However, Season 3 wants you to forget that Season 1 Easter Egg as new showrunner Erik Oleson gives a different origin story for Bullseye as FBI agent Benjamin "Dex" Poindexter. Wilson Bethel portrays Dex, who gains Fisk's attention with his fighting skills during an ambush. In the below preview, Dex claims the FBI has kept him on the "straight and narrow," but he's shown killing two men who had surrendered to him. Fisk sees this darkness in Dex and remarks, "I've never seen a talent like yours." Kingpin then dispatches Dex dressed as Daredevil to go mess with Matt.

Vulture reported on the comics history of Bullseye and noted how he's had many identities over the years — but not much backstory. When Bullseye hires other criminals to find and kill Daredevil in 1979's Daredevil #159, Bullseye goes by the alias Mr. Poindexter. During this arc, Bullseye reveals to his therapist in the psychiatric hospital that he killed his own father when he was 14 years old after years of abuse. Bullseye then captures Black Widow to antagonize Daredevil since Natasha and Matt were sometimes partners (and sometimes lovers) in the comics.

Another memorable Bullseye storyline starts in Daredevil #169. One of the opening pages says, "He has many names. One of them is Bullseye. By profession, he is a killer-for-hire. And even among his fellow professionals, he is feared." Daredevil visits the mental hospital where Bullseye just escaped and the doctors inform him how he has become more erratic and violent due to a brain tumor. This brain tumor makes him hallucinate that everyone is Daredevil and as the escaped Bullseye wanders New York City, he kills innocent people as a result of these delusions.

Bullseye and Daredevil had another epic battle in issue #181 from 1982. As documented on the website Major Spoilers, the Punisher tells Bullseye while in jail that Kingpin has found a new top assassin — Daredevil's complicated love interest Elektra. Bullseye escapes and kills Elektra while she's on a hit to kill Foggy. (If you care to remember the Ben Affleck Daredevil film, Bullseye also kills Elektra in that.) Elektra dies in Matt's arms and Bullseye makes the connection that Matt and Daredevil are one in the same.

He reports this news to his boss Kingpin, but Fisk doesn't believe him and orders Bullseye to bring him Daredevil's body. When Bullseye and Daredevil fight, Matt seemingly allows Bullseye to fall to his death. But Bullseye survives with a broken back and even more hatred for Daredevil.

While Bullseye in Daredevil will work for Kingpin, the series can't have him kill Elektra since she was the Black Sky in The Defenders. But Black Widow and Elektra weren't the only love interests of Matt Murdock's that Bullseye killed in the comics. In the Marvel Knights version of the comics from 1998, Bullseye attacks the church where Sister Maggie is working. (Sister Maggie is a new character in Season 3, who was teased at the end of The Defenders.) Sister Maggie survived, but Bullseye killed Karen Page with Daredevil's own weapon in that battle.

A Benjamin Poindexter version of Bullseye also shows up in the Ultimate Marvel comics of the 2000s. But in an interview with Screen Rant, showrunner Oleson said he was inspired by the Born Again and Guardian Devil installments of the comics. As CBR.com noted, Born Again deals with Kingpin sending a Daredevil imposter to kill Foggy. While that imposter wasn't Bullseye, the Man Who Never Misses does go to impersonate Daredevil in a later comic. And Screen Rant stated how the Guardian Devil connection should make fans a little nervous since that's the comic where Bullseye kills Karen.

Oleson and Bethel spoke to Bustle ahead of the Daredevil Season 3 premiere about Bullseye's origins in the comics. "The character obviously existed as a framework in the comics," Bethel says. "But unlike Matt Murdock or Karen Page or other characters who live in the Daredevil universe and in the larger Marvel Universe, I don't know that Bullseye ever got a real backstory or a real kind of deep-take look at who he is and what makes him tick." The actor notes how Oleson was able to "essentially create" Bullseye for the show and Oleson adds that Bullseye has an "awesome origin story" in the TV series.

The Comic Vine profile on Bullseye does offer some additional backstories on the villain. One story is that Bullseye and his brother attempted to kill their abusive father in a house fire and were sent to foster care. Another is that Bullseye was a talented baseball player, as the blog The Baseball Continuum outlined. So Oleson could have drawn from these comic stories to inform his version of Bullseye.

No matter how much Daredevil Season 3 takes from the comics when it comes to Bullseye, this villain is going to be bad news for Daredevil. But even with knowing that, it's going to be beyond thrilling to finally see Daredevil as Bullseye's target.