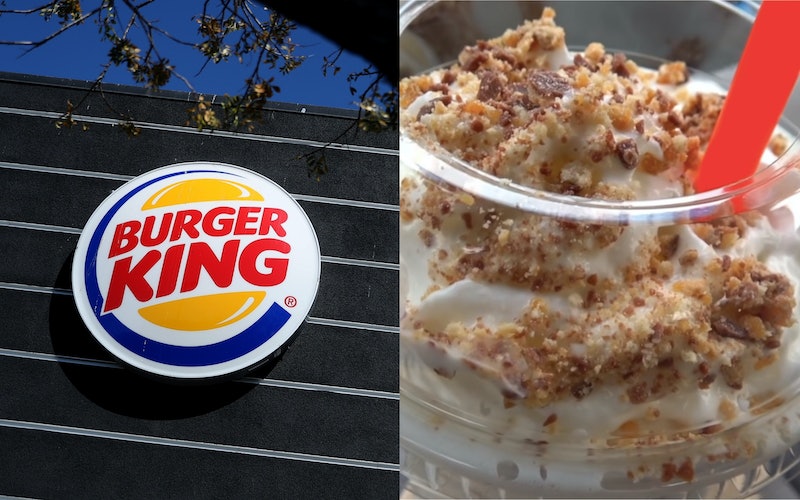 When paired together, caramel and chocolate are one of the world’s greatest flavor combinations. This is an indisputable fact. But it gets even better when you add it to ice cream — and if that’s your jam (it’s absolutely mine), Burger King has you covered: It looks like a Twix shake might be coming to Burger King soon, just in time for the warmer weather. Chocolate? Check. Caramel? Check. Crunchy cookie bits? Check. Creamy vanilla ice cream? Check, check, and check.

Somewhat curiously, the Twix shake doesn’t appear to be officially on the menu yet; as of this writing, it’s absent from the Sweets page on the Burger King website. (Credit goes to Chewboom for bringing this treat to my attention.) Shake options as listed are currently limited to Vanilla with M&M’s, Oreo, Oreo Chocolate, and three “Hand-Spun” varieties — Strawberry, Vanilla, and Hershey’s Chocolate. No announcements have been made about the potential Twix shake, either on social media or via a press release, so the whole thing seems to be flying pretty far under the radar for now.

Even so, a few lucky folks have been able to get a hold of it — including Ian K of the YouTube Channel Peep THIS Out!, who posted a video review of the Twix shake on May 14. It looks pretty much like what you’d expect — a vanilla shake with bits of Twix blended up into it — but according to Ian, it’s “a real treat.” In addition to complimenting the thickness of the shake, the reviewer noted that the whole thing really nailed that “classic Twix flavor.” “That is amazing,” he observed. Also, the Twix bits seem to settle at the bottom a bit as you drink, so don’t forget to grab a spoon — you’ll need it to scoop out all that caramel and chocolate waiting for you at the bottom of the cup when you finish.

Interestingly, a previous review actually dates back several months ago: YouTuber JAX ACDC published a video about the Twix shake on March 11. But, like Peep THIS Out!’s later review, this one, too, was overwhelmingly positive. The reviewer originally wondered whether the vanilla flavor of the shake itself might be a little overpowering, but that turned out not to be the case; when he actually tried it, he was surprised by the punch of the caramel. He also praised the “crunch of the cookie” and the “hints of the chocolate flavor” the candy lent to the shake. The final verdict? “Oh, this is good.”

Somewhat surprisingly, one outlet — the Fast Food Post — does seem to have access to details the rest of us hitherto have not. According to this site, the Twix shake “features vanilla soft-serve ice cream and Twix cookie bar pieces topped with whipped cream and more Twix chocolate pieces.” Furthermore, the Fast Food Post notes both that the Twix shake is available “for a limited time” at “participating locations nationwide,” as well as the fact that its arrival “coincides with the departure of the Vanilla Shake With M&M’s Chocolate Candies introduced earlier this year.” So, uh… if you dig the M&M’s shake grab one now while you still can. The Twix shake is expected to retail for around $3.99, according to the Fast Food Post, although prices frequently vary depending on the market.

It’s not totally clear where in the country the Twix shake is currently available; if you’re interested in trying it, you might want to call up your local Burger King to see if they actually have it before you swing by to try to order the thing. But hey, even if you strike out, there’s still one other Twix item on the BK dessert menu you can try out instead: The Twix Pie — er, sorry, the “Pie Made With Twix.” (That’s a curious way to put it, Burger King, but sure. You do you.) It may not be ice cream, but it does feature “a creamy caramel whipped filling topped with crumbled piece of Twix Bars, all resting on a vanilla crumb crust.” To be perfectly honest, that actually sounds better to me than the shake — and given how good the shake sounds, that’s really saying something.

Find out where your nearest Burger King location is here. Good luck!

More like this
Why TikTok Is Obsessed With Caesar Salads Right Now
By Alexis Morillo
TikTok's Butter Board Might Be The New Cheese Plate
By Emma Carey
Behind The Hilarity Of The "POV: You Walk Into My Room" TikTok Trend
By Lexi Inks
8 Completely Unserious Tips To Make Your Cuffing Season A Success
By Ginny Hogan
Get Even More From Bustle — Sign Up For The Newsletter