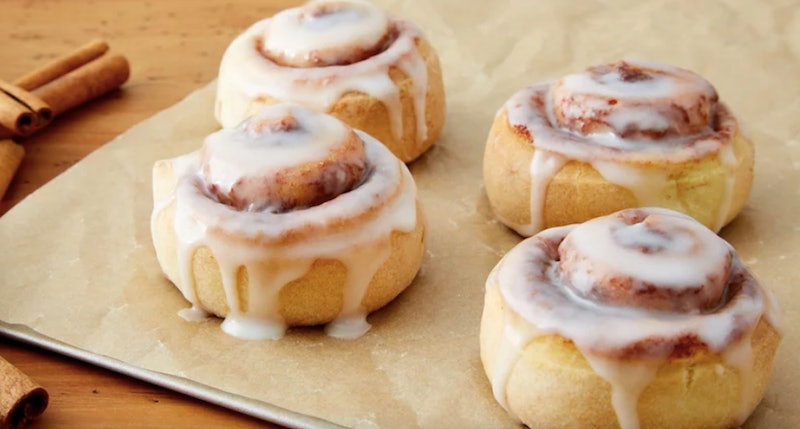 Oh, hey, guess what, ’90s kids? Your breakfast is about to get the dose of nostalgia you so regularly crave: Burger King’s Cini-Minis are back — and what’s more, they’re free. There’s one small catch, of course; according to Food and Wine, you can only get the itty-bitty cinnamon rolls if you make a Burger King order of at least $10 via Grubhub between now and the end of the year. But if you’re already thinking of getting Burger King anyway… well, having to go through a specific delivery service seems like a small price to pay. If you don’t wan $10 worth of food for yourself, team up with a roommate or coworker or something to meet that minimum — and then, sweet, sweet cinnamon rolls can be yours. For no additional cost. Yes, please.

Back in the ‘90s, Burger King teamed up with Pillsbury on a number of baked goods that punched up the breakfast menu somewhat. The main selling point for these items — beyond the co-branding, of course — was that they were baked fresh in the restaurant every day. Cini-Minis, which arrived in the spring of 1998, turned out to be the big hit of the partnership; meant to “taste like homemade cinnamon rolls,” they were “served hot with a side of icing so customers [could] have it ‘their way,’” according to the launch’s press release. They cost a mere 99 cents, too, making them as affordable as they were delicious.

The now-iconic commercial shilling the tiny cinnamon rolls featured the 1975 hit “Lovin’ You" by Minnie Riperton (who, fun fact, is Maya Rudolph's mom) because, I mean, who doesn’t regularly sing love songs to their breakfast?

Oh. You don’t? Just me, then? Whatever. Breakfast is great. Here’s the commercial.

It’s not totally clear when Cini-Minis were discontinued, but my guess is the early 2010s. This piece about the then-new Burger King kid’s breakfast meal from Consumerist, which was published in July of 2010, compared the meal to Cini-Minis; wrote Marc Perton, “Burger King’s real kiddie breakfast has long been the Cini-Mini, and no right-thinking child will be swayed by fry-shaped apple slices when that’s on the menu. And parents, you can get four Cini-Minis for $1.” Meanwhile, this Reddit post suggests they were on their way out — or perhaps gone entirely — by 2014. Today, they no longer appear on the Burger King menu.

Or at least, they don’t appear on the menu on Burger King’s website. Starting today, though — that’s Nov. 28, 2018 in case you’re not near a calendar — you can find them on the Burger King menus listed on Grubhub. All you have to do is scroll down to the “Breakfast Sides” section, and you should see them right there:

To get them, just fill your cart up with an order of at least $10; then go ahead and add the Cini-Minis. They’ll be included with your order when it arrives. You have between now and the end of 2018 to get 'em.

You do, of course, have to be located in an area where Burger King is a Grubhub offering in order to take advantage of the deal; you can find a list of all the cities you can get Burger King via Grubhub here. It includes more than 30 states, so alas, if you are in one of those 20 states where it’s not available, you may be out of luck. Sorry.

Everyone else, though? Knock yourselves out, whether it’s breakfast time or not. It’s always a good time for cinnamon rolls.

More like this
Heinz Just Relaunched A Bean-Tastic '90s Fave
By Sam Ramsden
The First Trailer For 'That '90s Show' Includes So Many Nods To The Original Series
By Jack Irvin, Alyssa Lapid and Grace Wehniainen
Pepsi’s Festive Flavour Is Finally Coming To The UK
By Sophie McEvoy
16 Friendsgiving Recipes Your Besties Will Love
By Alexis Morillo
Get Even More From Bustle — Sign Up For The Newsletter