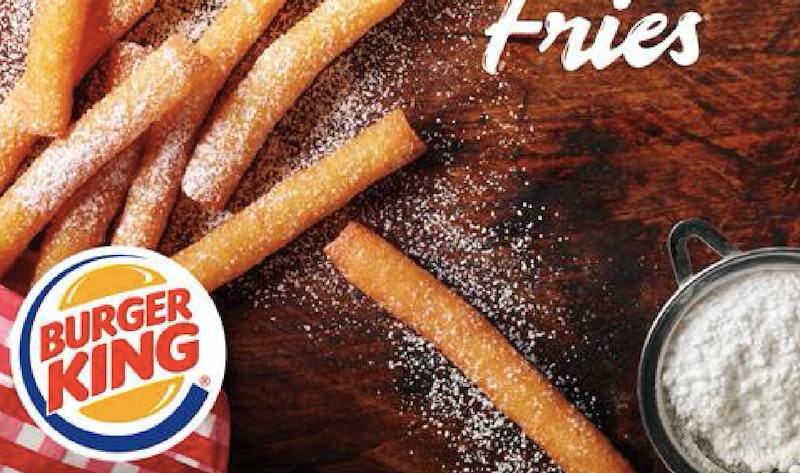 There are some childhood treats that seem to be completely tied to one location or memory. Cotton candy at a fair, cake with ice cream at a birthday party, or salt water taffy wherever dentists secretly sell it to force you to get more fillings. But now, Burger King has stepped up to the plate to introduce with a unique take on a childhood favorite, making it not only available, but also ever-so-portable. Burger King's Funnel Cake Fries are here to make your sticky-fingered dreams come true. For many of us, funnel cakes only existed in the realms of state fairs, carnivals, and maybe water parks. Or, for New Englanders like me, there was the close cousin of funnel cake, the aptly-named fried dough. Though different in ingredients and in consistency, they both involve a whole lot frying and a whole lot of sugary topping — so they are both delicious.

But as we wander into adulthood, there's less and less of an opportunity to stumble across our beloved funnel cakes and fried doughs — until now. These Funnel Cake Fries from BK will give you that greasy feeling of joy and frosting, but in handy, fry-shape packaging. They'll be available from Thursday, January 24th so keep your eyes peeled at a Burger King near you. What can you expect from their latest delicious treat? "Hot, crispy, funnel cake goodness, fried sweet to crispy perfection and topped off with powdered sugar," the company explains. "They are available for a limited time at a suggested price of $1.99 for 9 pieces." How limited a time? Nobody knows. But at about 22 cents per fry, I'm sold.

This isn't the first time that Burger King has delved into the fried dessert category. The Funnel Cake Fries seem to be some reincarnation or reinvention of Burger King's Funnel Cake Sticks, which were "powdered-sugar funnel cakes in the shape of dipping sticks, with a side of vanilla icing" and launched in 2010 according to BuzzFeed. When these sticks disappeared, it seemed like fried dough sensations had returned to their natural homeland of state fairs and waterparks — until this moment of the Funnel Cake Fries triumphant return.

Of course, if funnel cake isn't your thing because you, I don't know, have a vendetta against joy and don't like the feeling of sugar stuck to your fingertips, there are plenty of other Burger King desserts to try. Some of their classics are always a winner, like the apple pie, Oreo cheesecake, or a traditional sundae. But I have to say, if you have a real sweet tooth then you may just want to hit up BK in Switzerland, where donuts, chocolate muffins, hot brownies, hot blondies, Belgian waffles, and even the mysteriously named King Fusion Twix are all on offer. In fact, why not just do a world tour of Burger King desserts? It could be like Around The World In 80 Days but with a constant, unbearable sugar-high.

Burger King is definitely pushing the boat out with their Funnel Cake Fries, but there's no guarantee how long they'll last. If you want to relive your childhood favorite but without having to share, they'll be ready and waiting.