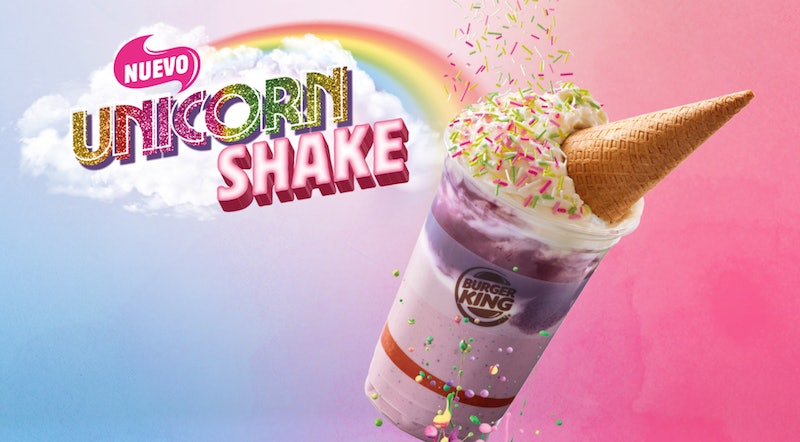 For anyone out there who is still into the unicorn food trend, I have good news and bad news for you. The good news is that Burger King has a Unicorn Shake on the menu this summer — as in, a milkshake that legit looks like a unicorn. It’s both gorgeous and hilarious, as well as sure to perk up your Instagram and your taste buds alike. The bad news, though, is that you can only get it in two very specific places: It’s exclusive to Burger King locations in Spain and Portugal. But, I mean, hey, if you were already thinking about planning a trip to Spain or Portugal in the next few months, then maybe this is just one more reason to get traveling, no?

A pastel purple dream, the Burger King Unicorn Shake is blueberry and vanilla-flavored, topped with whipped cream and sprinkles, and utterly out of this world. It’s unclear what the cost of the treat is, but for reference, a Burger King shake in Spain usually clocks in at 2,79 euros, or about $3, according to Burger Lad. (That’s about on par with what they cost in the United States; here, they’re typically between $2 and $4, per Fast Food Menu Prices.) It’s possible the Unicorn Shake might cost a bit more than that, given that it’s so very, very extra — but it gives us a ballpark figure to use as an estimate. At least we do know how long it’ll be on the menu, though: According to the fine print on both Burger King España’s and Burger King Portugal’s websites, the Unicorn Shake will be available until Sept. 9, 2019, after which it will vanish in a poof of sparkly, rainbow-colored smoke. (Or something.)

I don’t speak either Spanish or Portuguese, so in order to read the product descriptions on each of the international Burger King websites, I had to run them through Google Translate. And, uh, folks? The translation of the BK Portugal one is particularly amazing. It reads:

“We made up a full-color unicorn, fed it with [blueberries], and gave it a drink of vanilla ice cream. Result? A magic shake that will make you shine on the nets. You cannot miss the hit this summer.”

It adds as an asterisked post-script, “No unicorns have been hurt throughout the process.”

I assume by “the nets,” we’re talking about the internet; in the Spanish description, that same phrase is translated as “the networks.” Either way, though, nothing tops the mental image of a made-up “full-color unicorn” being fed blueberries and vanilla ice cream, with the mysterious end result somehow being a magical milkshake. That’s the greatest thing I have ever heard.

The shake itself also pretty spectacular; honestly, it’s the kind of thing I’d expect more from Baskin-Robbins or Dairy Queen — joints that specialize in ice cream — than BK. A layered affair, it features a blueberry and vanilla milkshake topped with what looks like more blueberries and whipped cream; an ice cream cone placed upside-down atop the concoction forms the unicorn’s “horn”; and lastly, rainbow sprinkles add an extra dose of magic. I mean… well done, Burger Kings España and Portugal. If I were going to dream up a unicorn-themed milkshake, that’s pretty much exactly what I would have gone for.

Even the social media campaign for the shake is knocking it out of the park. I don’t know if you’ve checked BK Spain’s Instagram lately, but there are currently three posts up on it promoting the shake. The first looks like it was posted as a teaser prior to the treat’s release; it depicts an unknown human in a bright purple shirt wearing the pink version of those ubiquitous and mildly terrifying horse masks along with the caption, “Quién fuera unicornio,” or “Who was unicorn?” The second is the full product image seen further up; there, the caption is, “Un día eres Shake. Al siguiente, unicornio. Nunca se sabe,” or, “One day you are Shake. The next, unicorn. You never know.” (A-plus caption, BK España.)

It’s a pretty standard sort of Instagram picture — pretty, happy people holding a showy food item — but the caption, again, bumps it up to the next level: It reads, “La normalidad está sobrevalorada,” or “Normality is overrated.”

Let it be known that when I die, I want “Normality is overrated” written on my tombstone.

Anyway, if you are by chance either based in Spain or Portugal or scheduled to visit either country soon, you can grab a Unicorn Shake at select Burger King España and Portugal locations between now and Sept. 9. The rest of us will have to just make due with hacking the regular BK shake menu by getting some sugar cones at the grocery store and sticking them upside-down in our Twix shakes. Oh well. At least we still get shakes!