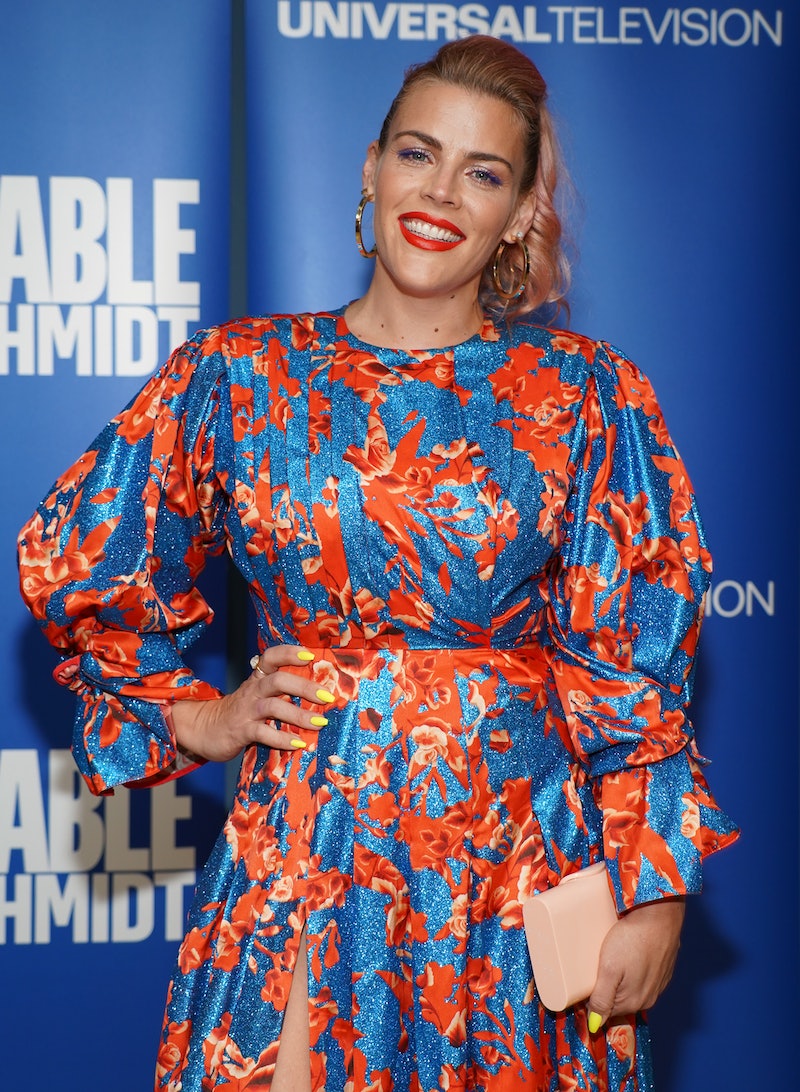 Busy Philipps wasn't about to let a busted knee ruin her outfit. Busy Philipps wore a Swarovski Crystal Band-Aid on her knee during a press event, proving that medical gear can be high fashion. The Band-Aid was MacGyvered by Philipps' stylist, Karla Welch. Welch is also stylist to A-list celebs like Tracee Ellis Ross and Olivia Wilde, so the woman knows how to put together an outfit. When Welch came to dress Philipps for a press event in Chicago, she discovered that her client had a scraped knee from falling off a bike.

While a long pair of pants or a maxi dress could have easily hidden the cut, Philipps' outfit was already chosen so Welch had to improvise. Philipps was set to wear a short-sleeve blazer dress with embellished bows from Mach & Mach, and a pair of of crystal-embellished bike shorts from the same designer. That very look was sent down the Mach & Mach runway, so Philipps was ready to wear a catwalk-approved look. But a nude-colored Band-Aid would have ruined the aesthetic of the outfit, so Welch whipped out a bedazzler.

Since sparkle was the theme of the outfit, Welch glued Swarovski crystals to a big Band-Aid. "Trauma but make it fashion," Philipps shared in the caption of her Instagram photo. "@karlawelchstylist is a superstar for making me a custom crystal bandage for my skinned knee to go with my crystal bike shorts and crystal embellished blazer by @machandmach."

"It was a Fashion Emergency," Welch replied in the comments section. Actress Katie Aselton also hopped into the comments, writing, "She needs to start a line of these for people like us." One can assume that "people like us" means clumsy folks who are prone to getting banged up.

Welch also posted a photo of Philipps on her own Instagram, explaining the bedazzled bandage in her caption. "She banged the f outta her knee and I didn’t want to change her look so that’s what we damn well did," Welch wrote.

"So committed to the look! You didn't even flinch!!" Philipps joked in the comments section.

After seeing the glammed-up Band-Aid, Megan Rapinoe, the co-captain of the U.S. Women's National Soccer Team, wanted one for herself, too. "This is not real life. I need 7 of those for my shins," Rapinoe wrote. Welch is also the stylist for the soccer star, so that could very well be in the cards.

Philipps isn't the first celebrity that has decided to lean into their injury while on the red carpet. In 2016, Lorde wore an arm cast to the Met Gala. But rather than trying to hide it with a long sleeve, Lorde wore a sleeveless dress by Valentino. Then throughout the night the artist asked the Gala's biggest celebrities to sign her cast. Everyone from Kanye to Taylor Swift penned their signatures onto the plaster.

Mariah Carey also wore a leather arm swing with metal studs back in 2013, making the cast look like part of her little black dress.

From scarped knees to broken bones, A-listers know how to give their injuries a fashionable touch.