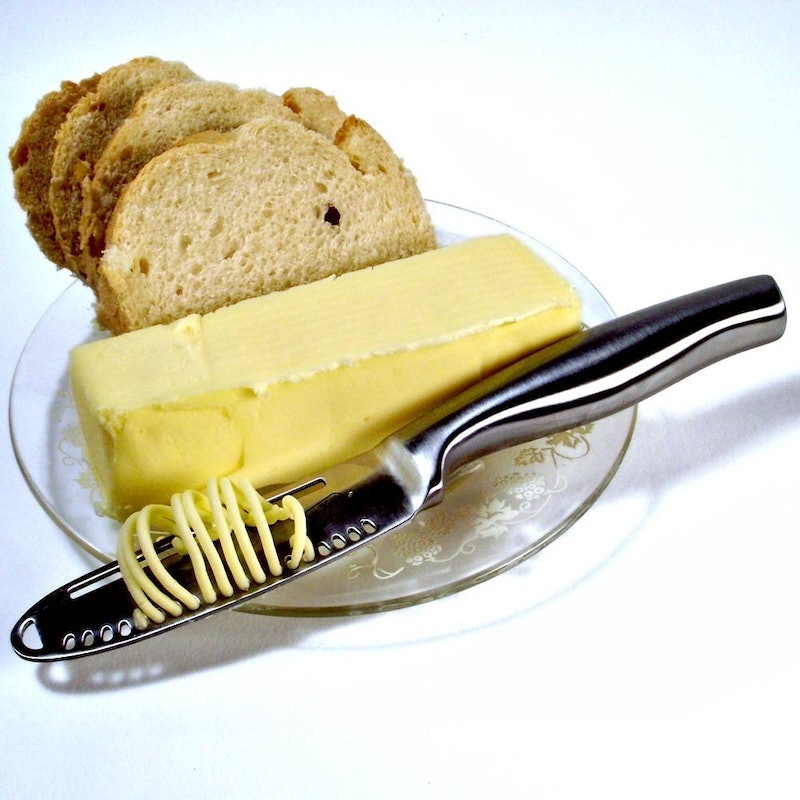 And today in Weird Things You Had No Idea You Needed, we have this: Butter Knife Magic, a kitchen device that promises to make spreading butter on bread a heck of a lot easier than it typically is. I mean, we’ve all been there, right? That dreadful moment when you realize that you have not allowed your butter to soften sufficiently before you attempt to spread it on your bread, resulting in a mangled slice of Country Wheat and a sad, sad snack? Well, no more: Never again shall your overly-hard butter rip apart your bread before you have a chance to enjoy it.

The internet is a curious place.

According to the Butter Knife Magic website, the device was created by a company called Dynavention Inc. Co-founded by Bev Hanna, Jaime Paredes, and Zahida A. Khan, Dynavention Inc. has a “passion for designing and marketing high quality, unique products to solve day-to-day problems.” And what problem is more representative of the day-to-day variety than the “Oh noes! My butter just destroyed my bread!” problem? Accordingly, the company launched the first generation of Butter Knife Magic in October of 2014; it subsequently made its way to Amazon in December of that year.

Butter Knife Magic, which is made of stainless steel, looks sort of like what might happen if a vegetable peeler and a butter knife were genetically spliced: It’s shaped like a butter knife, but along one edge, it’s got a whole bunch of tiny holes; along the other, there’s a big ol’ slice; and at the point, there’s a kind of… rounded, triangular hole. Using the edge with the series of tiny holes results in your butter basically being grated, making for easier spreading, while the edge with the big, long slice creates a single, wider butter curl. The triangular thing at the tip, meanwhile, makes a sort of cross between the two: The resulting curl isn’t as delicate as the shredding side’s curls are, but not nearly as wide as the slicing side.

To be honest, I’m not totally sure why the knife needs three different modes, but maybe it has something to do with the product copy selling it as a sort of artistic tool as well as a practical one: Instructions are included on how to make perfect, buttery “curls, swirls, and slices” that will “impress your friends and family when they see how creative you are” and make “YOU … the coolest person in your friends and family circle.”

I had no idea a butter knife could do so much for my social standing.

Reviews are generally favorable; a number of folks on Amazon who have been verified as actually having purchased the thing have noted that it’s “a pretty cool little tool,” “a pleasure to use,” and — as a bonus — “helpful for hands with arthritis.” A few people were less enamored, though, writing that “it works to a point, but the butter gums up on the back side of the knife and makes a mess” and that “it’s more hassle trying to get the correct angle to get this to work than should be necessary” — so, your mileage may vary.

There also does seem to be a fairly major downside to Butter Knife Magic: It’s apparently a little difficult for left-handed people to use. Wrote one reviewer:

“Great little knife. It’s made for right-handed people, because of the angle and cut of the notches. It would be nice if it came in a left-handed version, too. Can I spread butter with my right hand? Of course, but why should I have to. I gave it 4 stars for not having this bit of info in the description.”

And, I mean… that’s a fair complaint. Our world is generally designed around right-handedness, despite the fact that about 10 percent of the global population are lefties — 10 percent being about 700 million people. Let this be one more point of data that proves societal “defaults” are BS.

You know what the best part about this whole thing is, though? There is a whole market for this kind of butter knife. There is, for example, the Microplane Butter Blade, which can be purchased from Bed, Bath & Beyond for $9.99:

The DIVIPAL DVPL butter knife, which can be acquired from Amazon for $13:

The Butterup Knife, which — I kid you not — is in the Museum of Modern Art’s Design store for $20:

All of which, by the way, merely scratches the surface of the number of products out there that attempt to solve the Hard Butter, Soft Bread Conundrum. Seriously — there are so many more. Hit up Google if you don’t believe me.

In any event, Butter Knife Magic can be acquired online; whatever you do, though, don’t try to go to Dynavention Inc.’s website. It’s kind of… uh… only partially finished. I mean, it looks like a typical online storefront, but it’s not actually populated with any products yet:

So, when you click on one of the not-products, you get taken to a page that looks like this:

But that’s why we have Amazon.

Happy tea time, my friends. May your toast forever be sufficiently buttered.