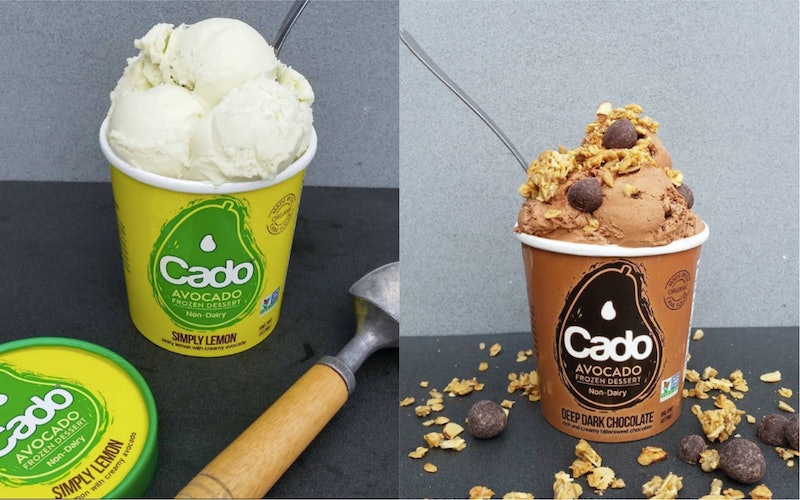 I scream. You scream. We all scream for...avocados? Our collective love of ice cream likely only rivals our love of the pitted, green fruit. Now, you don’t have to choose between your two great loves. There is an avocado ice cream called ‘Cado’ that is giving us a new way to feed our two hungry, hungry birds with one delicious stone.

According to the company’s website, Cado is the first avocado-based ice cream “that tastes like real ice cream.” Refinery29 is to thank/blame for bringing the dairy-free ice cream to light. They recently wrote about their discovery of the avocado ice cream, speaking with one of Cado’s co-founders Meghan Dowd. Dowd confirmed that the ice cream is vegan, which is great news for anyone who wants to feed their ice cream fix while forgoing the dairy.

“We keep the ingredients list very simple,” Dowd told Refinery29. You can even read the full list of ingredients in each of their three available flavors (Deep Dark Chocolate, Simply Lemon, and Mint Chocolate Chip) on their product page. In addition to being dairy-free and vegan, Cado is also gluten-free, soy-free, and nut-free. Cado products are also organic and made from fresh avocados.

Cado is also looking to expand their flavor offering, according to Dowd’s email with Refinery29 as well as their FAQ page. If you’re a fan of Java Chip, Vanilla, Salted Caramel, or Cherry Amaretto, you could soon be feasting on an avocado-based version of that ice cream flavor.

But does it taste like avocados? If you’re worried that the flavors are competing in Cado’s products, you have nothing to fear. Dowd claims that when people sample their ice cream, “they have no idea it's made from avocados.”

You’re likely no stranger to things like avocado smoothies or avocado brownies. Avocado is often used as a plant-based substitute to add creamy texture to food. Hence why Cado uses it as dairy substitute in their ice cream. “Avocados, because of the quality of the fat and creaminess, had found their way into our smoothies and pies, and so using them to craft ice cream was a natural next step,” Dowd told Refinery29.

Cado ice cream is available across the U.S. in many natural grocery stores, local grocery chains, and convenience stores. If your favorite place to grocery shop doesn’t carry Cado, there’s a helpful Cado request form you can fill out and drop off with your store. Once you find a pint of Cado, you can use one of the dollar-off coupons provided on their site.

If you’re still wary of using an avocado substitute, Whole Foods touted the avocado-based ice cream in their food trends to watch for 2018. Whole Foods predicted that we’ll be seeing more plant-based products this year or, as they called it, “high-tech goes plant-forward.”

Plant-based options are becoming more accessible, with some popular food chains adding more vegan and vegetarian options to their menu. Brands like Ben & Jerry’s are adding vegan options to their list of classically cream-based products. Places like Kentucky Fried Chicken that literally have meat in the name are testing vegetarian options. There isn’t much word on what KFC’s vegetarian “chicken” will include. However, it’s said that it will definitely feature the chain’s iconic eleven herbs and spices.

In April, White Castle added the Impossible Burger to its menu, giving its customers the chance to try the non-meat vegetarian patty said to “bleed” like a meat-based burger. The Impossible Burger’s meat-like texture comes from a protein called “heme”, which is a plant protein also found in muscles.

If you’d prefer your plant-based products to still come sans-”bleeding,” avocado ice cream is definitely a safe place to start.