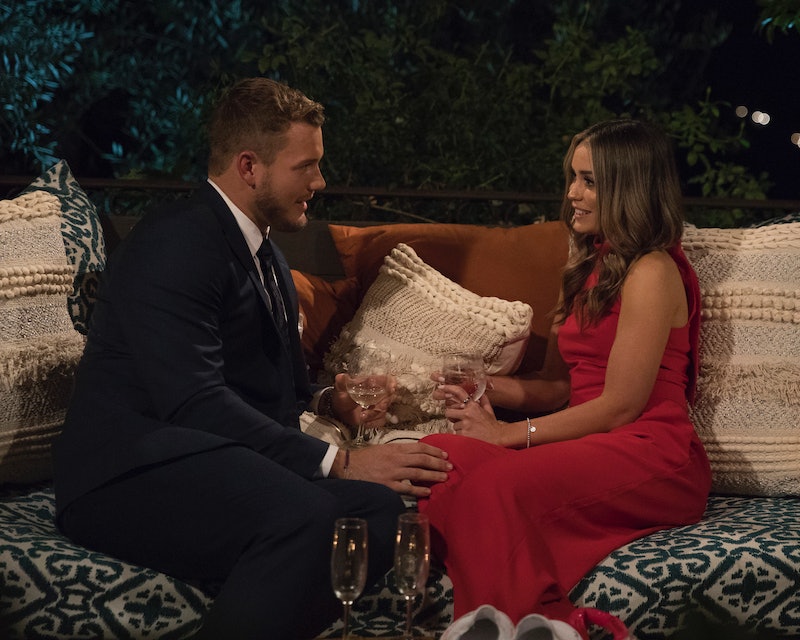 There have been some major standouts on The Bachelor thus far between the drama-causers, budding villains, and frontrunners. And it's only been two episodes! But so far Bachelor contestant Caitlin hasn't made a big splash. That's likely to change soon as the show goes on and fans get to know the women better. But while Colton's season may not have revealed a lot about her yet, Caitlin's Instagram shows who The Bachelor star is IRL.

Caitlin did have one standout moment in the premiere. She added to the running list of virginity references when she brought a balloon shaped like a cherry and popped it in front of Colton. Hardy har har. Besides that, what the show has offered as far as information goes is that she's a 25-year-old realtor from Canada. Yes, like Kaitlyn Bristowe before her, we have another Canadian Caitlin on our hands. Maybe she'll win her way into fans' hearts and become the Bachelorette also?

Her ABC bio further reveals that she loves taking photos, painting, singing in the shower, cheesecake, city life, and riding horses. You know, your typical stuff. But here's what Caitlin's Instagram says about her life off the show.

She's Moderately Excited About Being On The Show

"Tonight’s the night!🌹✨Things are about to pop off! 🎈Tune in to ABC at 8pm!" That's a lukewarm caption if I ever saw one. Maybe Caitlin didn't have the time of her life dating Colton and therefore doesn't really feel like giving him a glowing caption.

She Got A Puppy For Christmas

Meet Cooper the Dachshund. Caitlin had a lot of warm things to say about the newest edition to her family. "In two weeks this little man has taught me patience, discipline and most importantly the value of companionship. Learn to love unconditionally... just as puppies do," she wrote in the caption.

She Graduated College In 2017

On her diploma it says she majored in psychology, which hopefully came in pretty handy during the wild Bachelor days.

She Left Behind Snowy Canada For A Trip To Greece

Trading up, for sure.

She Was Blonde Before The Show

Caitlin has brown hair on The Bachelor, but she's rocked blonde locks before too.

No wonder she wrote in her ABC bio that "if she could go anywhere in the US, she would ride horses through the Colorado mountains." She's been a horse riding champ for years. Here she is at Nationals at Toronto's 90th Royal Winter Fair.

Perhaps Colton will set up a horseback riding date for them in the near future? She would certainly be in her element, and it would give fans a chance to get to know her a little better. But at least we know from her Instagram that she's got a cute dog.