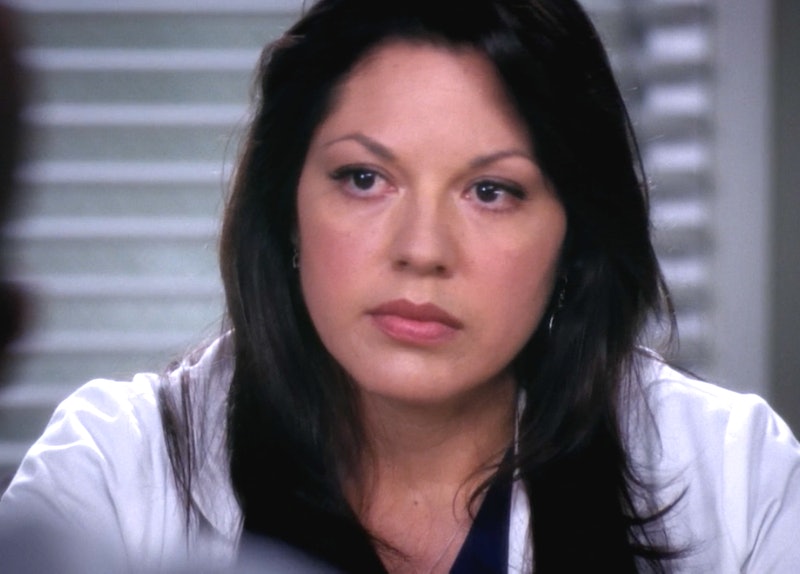 The return of ghosts from seasons past doesn't have to end with the 300th episode of Grey's Anatomy. Actor Sara Ramirez, who played Callie Torres, said she'd return to Grey's Anatomy — or at least said she's open to it. Ramirez and the character she played were fan favorites for a long time. Even though she appeared in 240 of the 300 episodes and had a 10 year run on the show, man fans would like to see what happened to Callie Torres. She was, after all, an integral character on the show. The fact that none of the 300th episode's many callbacks really touched on Torres is even more reason that the awesome character should come back at another point of the 14th, or even 15th, season.

The last time Grey's fans saw Torres was at the end of Season 12, when she and her girlfriend, Penelope Blake, moved to New York. That doesn't mean she completely cut ties with Grey Sloan Memorial Hospital, though. Callie's ex-wife, Arizona, with whom she has a daughter, Sofia, still works at the hospital and is close friends with Teddy. Sofia return to Seattle and her relationship with Arizona has become a storyline in Season 14 too, so that begs the question of whether or not Callie will return. After all, she has to go back to Seattle to visit her daughter, right?

A return of Callie Torres, even if it were just a quick cameo, would make fans happy because of course Grey's fans are dying to know how Callie is doing in New York. She's not known for committing to longterm relationships, so did she end up staying with Penelope? Does she have a new partner? How is she doing? These are all questions that need to be addressed.

Considering that the 300th episode left everyone feeling nostalgic about the show's past, it seems likely that Callie could make a future appearance. The 300th episode proved that any return is possible, even the return of a character who died — like Meredith's mom, Ellis Grey. Considering that Callie is one of the few characters that Grey's Anatomy didn't kill off (this show is brutal), she would be easier to include in the show than Ellis. Perhaps she could have a "guest arc" like Teddy Altman.

The newest season of Grey's has ignited so many rumors about previous cast members' returns that it seems inevitable at this point. First, the rumors that Sandra Oh's Cristina Yang would come back basically set the Internet on fire, and Oh has been pretty vocal about not wanting to return to Grey Sloan. Perhaps Ramirez's willingness will convince the writers of Shondaland to make Callie's return come sooner than later. Nobody wants to have to wait for the series finale to finally find out more about what happened to Callie.

Grey's Anatomy has been a wild ride, and, if Ramirez returned, the show would benefit from having a familiar face that everyone loved watching for so many years. Of course, Ramirez doesn't necessarily need Grey's. In her interview with EW, when they asked the actress if she made the right decision by leaving Grey's when she did, she responded, "Absolutely." Since then, she has produced several films that focus on the LGBTQ community, and she's become a series regular on the show, Madam Secretary.

So, yeah, she definitely doesn't need Grey's, but... Grey's needs her. Or, at the very least, its fans do.

More like this
Shonda Rhimes Responded To The Surprise Exit Of A Day 1 'Grey's Anatomy' Figure
By Grace Wehniainen
This 'Gossip Girl' Wardrobe Error Has Gone Viral On TikTok
By Alyssa Lapid
All The ’70s Easter Eggs You Missed In 'That ’90s Show'
By Grace Wehniainen
'Abbott Elementary' Fans Probably Missed This 'Parent Trap' Easter Egg
By Sam Ramsden
Get Even More From Bustle — Sign Up For The Newsletter
From hair trends to relationship advice, our daily newsletter has everything you need to sound like a person who’s on TikTok, even if you aren’t.