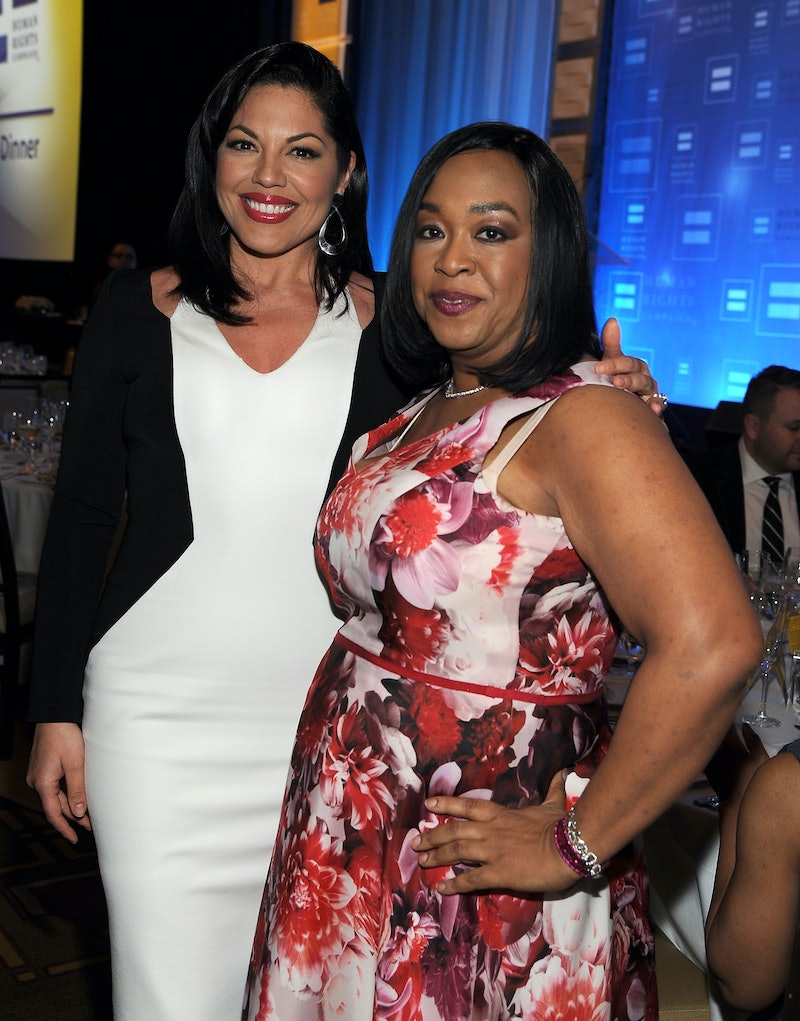 Will Dr. Callie Torres be scrubbing back in at Grey Sloan Memorial? Sara Ramirez could return to Grey's Anatomy, the ABC medical drama's creator Shonda Rhimes revealed during an Instagram Story Q&A on Wednesday, August 8. In fact, Rhimes admitted she already made efforts to get the beloved orthopedic surgeon to return to Seattle in the past.

When a fan asked Rhimes if she planned to "bring back Callie anytime SOON" (with a crying face emoji), the Shondaland founder spilled some serious Grey's tea. "Let me tell you something: we tried," she said on her Instagram Story. "CBS has a hold of her because she's on another show, and we can't get her. But we love her. Always. This is her home. Come home, Callie." (Bustle reached out to CBS for comment, but did not immediately hear back. CBS declined TVLine's request for comment regarding the matter.)

Rhimes' confession finally shed some light for Grey's fans as to why Ramirez — who, last year, joined CBS' Madam Secretary as political strategist Kat Sandoval after leaving Grey's in 2016 — didn't make a cameo on the ABC hit's Season 14 finale this year. After all, in the episode, Callie's once-wife and co-parent to their daughter Sofia, Dr. Arizona Robbins (played by Jessica Capshaw), left her job in Seattle for New York to presumably reunite with the other half of the Calzona moniker.

Rhimes didn't indicate if the Season 14 finale — also Capshaw's final Grey's episode — was the episode for which she wanted Ramirez to make a reappearance. However, according to TVLine, that's exactly when CBS reportedly blocked Ramirez's return.

Now that Capshaw's Arizona is also out of the picture, the likelihood of Ramirez reviving her character in the foreseeable future seems unlikely. Even so, fans seem to be clamoring for a joint Calzona onscreen reunion at some point.

In an interview with Entertainment Weekly last November, Ramirez said Callie's return is still possible though. "When Shonda [Rhimes] and I last spoke, we agreed to keep the conversations going, and she knows I’m open to keeping those conversations going," she told the magazine.

She also said as much when announcing her Grey's departure in 2016. “Shonda’s been so incredible to work for and we will definitely continue our conversations!" she posted in a Twitter statement. "I send my love to Ellen [Pompeo], the rest of the cast and crew, and I look forward to always being a part of the Shondaland family!” For Rhimes' part, she also released a statement at the time, writing, "Sara Ramirez’s performance inspired me as well as millions of fans each week ... She will always have a home at Shondaland."

Of course, Callie isn't the only ghost of Grey's past Rhimes wishes could return to Grey Sloan Memorial. "If I could bring back any Grey's character, it would be George," she said in her Instagram story Q&A of the role played by T.R. Knight from 2005-2009. "I love George so much and I miss George so much, and he was such an awesome character, and he was super funny and adorable and amazing. George." That would be difficult, of course, since George O'Malley died in Season 5 — but it also wouldn't be the first time a character returned as a ghost. (RIP Denny.)

Busy or not, fans would surely be glued to their TV screens to see Walsh, Ramirez — or any beloved Grey's vet — walk through the hospital doors at some point in the future.