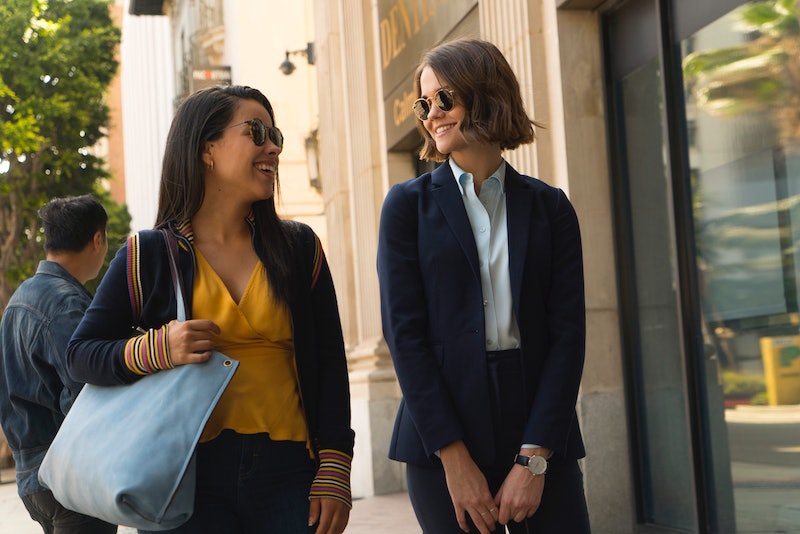 Being outspoken was never a weak point for Callie Adams Foster, but as she's moved from The Fosters to Good Trouble, Callie has really found her voice — for better or for worse. Typically, your early 20s are a time for crippling self-doubt and poor reflection on your actions, but either Callie is more mature than her counterparts, or she's realized that your 30s and 40s are very much the same as your 20s — just with bigger budgets and a little more clout in the word. Callie's encouraging others to be outspoken on Good Trouble, and though it may go wrong sometimes, ultimately, everyone is stronger for it.

Yeah, Callie is a lawyer, so it's pretty much her job to stand up for herself. At the beginning of the season, she and Mariana were flailing and failing at work — Callie thought she was the counterclerk for Judge Wilson. She didn't get along with her fellow clerks. She barely could get a word in edgewise. And though it's only been a short amount of time, Callie has gained both confidence and legs to stand on. Callie was a timid field mouse until about the time that Ben tried to pull a fast one on her in spilling the beans about knowing Malika. That was Callie's come-to-Jesus moment. She decided that no one was going to take her shine, and when she was honest with Judge Wilson and herself, a weight fell. She was ready to tackle everything. Or, you know, at least more.

Of course, Callie's honesty won't be all fun and games. She encouraged Rebecca to come forward with her allegations of sexual harassment against a federal judge in order to save the next clerk. This is noble, but the only reason Rebecca could say something is because she comes from a rich family. Conversely, Callie has been helping out Jazmin, Gael's transgender sister, with a discrimination case. Callie is getting Jamie to help Jazmin pro-bono, which is generous, the outcome might not be as simple as Rebecca moving onto a new job after making an allegation against a powerful man. It's easy for Callie to encourage both women, but the outcomes could be different simply because Rebecca has a lot more resources to land on top than Jazmin does. Jazmin has a bigger battle to fight than Rebecca does.

Even so, it's encouraging that Callie is encouraging others to find their voices — she even got Judge Wilson to call for removal of his fellow judge because of his ongoing sexual harassment, which is huge. Judges are appointed for life, and it's hard to get rid of one once they're in. Judge Wilson's self-reflection and eventual assertion that Callie hold onto her dignity means that Callie got through to him, too.

Everything may not go as planned for Callie, her friends, and her coworkers, but personally, I would rather stand up for what's right and fail than be quiet and complicit to wrongdoing. Callie does, too, apparently. And the chips can fall where they may, but at least they all tried. Callie tries, and that's half the battle.