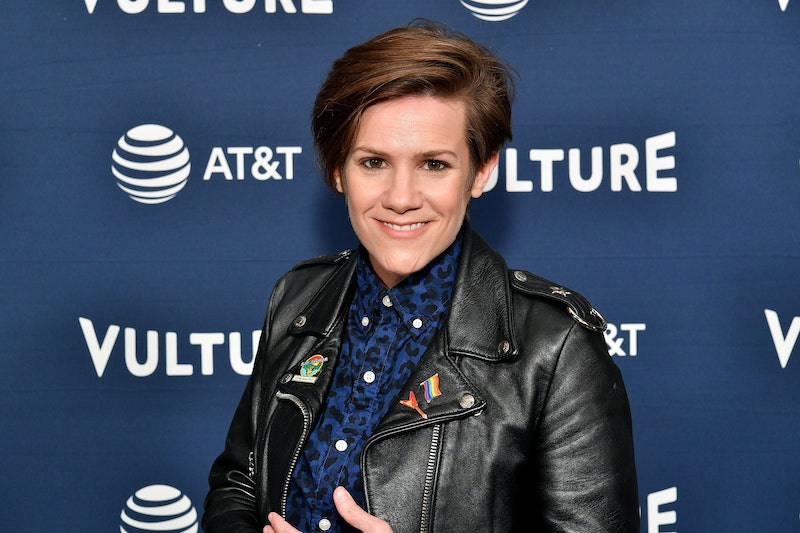 Not every comedian would name a standup special Rape Jokes — but Cameron Esposito has a story to tell. The Take My Wife co-creator and star wants to take back the conversation about sexual assault, and she's not mincing words about it. Cameron Esposito wants to reclaim rape jokes, a fact that's clear in her new special, which premiered on Vulture on Monday, June 11.

Esposito starts off the special with a few criticisms of President Trump, which seemed to get the L.A. audience warmed up and laughing. Her critique of Trump's business endeavors, though, quickly leads into the heart of the hour long special. "I'm a survivor of sexual assault, and I don't love that he brags about assaulting people. I just think that's weird," Esposito says of Trump in the special. (Trump has denied all allegations of sexual assault.)

The comedian also praises the people who have come forward about their own experiences with sexual misconduct, commending their "human grace" and "strength." She says in the special,

"It's not like those are new stories. But people standing in their truth and telling them? That's f*cking new. I think it's really cool that's happening."

As Vulture explained, Esposito's special came together quickly, and that wasn't an accident. After watching various stories about sexual misconduct unfold in the news, the comedian wanted to keep the focus on survivors, not those accused of misconduct, Vulture reported. So Esposito brought the whole thing together in less than a month, and released the special independently. Rape Jokes is available to stream on Vulture, as well as on her own website, for free, though viewers can choose to donate to RAINN, which provides a hotline for survivors of sexual assault.

Back in May, Esposito talked to Vulture about her plans to create the Rape Jokes special. During that interview, the comedian talked about her experience being raped in college. She told Vulture that while she hadn't talked about the assault during her standup in the past, she wanted to address it in the new special. Esposito also explained that the 2016 election helped convince her to do the special, too. She told Vulture:

"Hearing the audio of Donald Trump, the 'grab them by the pussy' audio, which is about what I'm talking about — that taking what you want. That was another marker. I will maybe never recover from having had that happen to me. Having had somebody just not care about what I wanted, and then hearing somebody say that's his whole M.O., and then having that person become president. As a comic, sometimes you talk about things on stage because you get to this point where you're like, 'I can't not talk about this. I have to. I can't not. This is where I’m at.' That's what happened for me with the election. I just couldn’t not talk about it anymore."

Jokes about President Trump are common, but Esposito has a personal reason for bringing him into her special. Plenty of people have criticized Trump's comments about women, but it's still jarring to remember that the man on the Access Hollywood tape is the president of the United States.

Other comedians have taken it upon themselves to reclaim "rape jokes" in the wake of the #MeToo movement, too. For example, Caveat, a venue in New York, recently hosted an event called "Rape Jokes: By Survivors," which featured a number of comedians talking about sexual assault. Sexual misconduct is horrible, but there can be a catharsis, for some people, to joke about the experience.

During an interview with Mother Jones about the new special, Esposito shared some wise words about how to approach rape jokes. She told the magazine,

"You should assume there are survivors in the audience, because numbers-wise, there absolutely are. The survivors aren't going to be crushed by your joke. They've already lived through trauma that is much larger than a joke. But maybe your jokes should be pretty good if you're dealing with a topic that affects people in a real way."

As Rape Jokes shows, jokes about difficult topics don't have to be avoided. But they should be inclusive and sensitive to survivors, which Esposito captures perfectly in the new special.