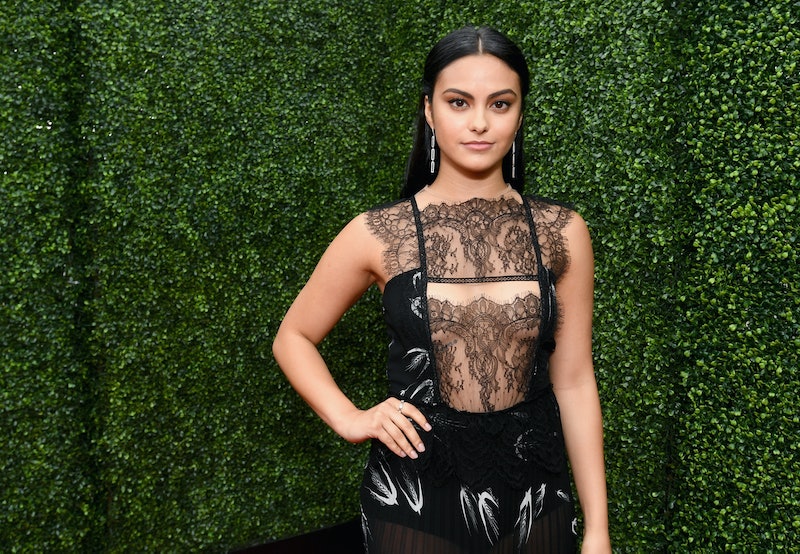 It's no surprise that some celebrities prefer to keep their private lives under wraps. The constant flashbulbs, rumors, and often unfounded speculation would undoubtedly wear on any relationship. And when asked about her famous significant other during a recent interview with L.A. Confidential, Camila Mendes' reason for not talking about Charles Melton made complete sense. It wasn't just something flippant like, "It's nobody's business," either. Her response was thoughtful, reasonable, and totally understandable.

As Us Weekly pointed out, Mendes wouldn't say much about her relationship with Melton, but she did tell L.A. Confidential that working with him is "great." Fun fact: In addition to being her off-screen boyfriend, Melton also happens to be her current romantic interest on Riverdale. In regards to why she prefers not to elaborate more than that, the 24-year-old star explained to the publication,

"In my day-to-day life, I am an open book. But I’ve also developed this sixth sense. I understand how my spoken words can translate into written words and how things can appear out of context. It’s like, yeah, even though I feel comfortable talking about some things, do I really want to see it written over and over again? Sometimes, it’s not really worth it."

After weeks of speculation, the pair all-but confirmed that they were, in fact, dating, thanks to a very cute and very couple-y Instagram debut. On Oct. 7, Mendes shared a picture of Melton kissing her forehead, and simply captioned the shot, "mine."

Ever since then, the two stars have continued to give fans the occasional glimpse into their real-life relationship. They're not shouting it from the rooftops or anything like that. Both Mendes and Melton will share pics of them together from time to time — and they typically keep the captions pretty short and sweet — which essentially enables them to wield control some over their public-facing narrative. Smart, right?

Of course, there's bound to be the occasional slip-up when you're constantly trying to keep quiet about the person you're clearly smitten with. During a red carpet interview at the 2018 E! People's Choice Awards back in November, for example, Mendes accidentally revealed Melton's adorable nickname for her.

"I'm baby dragon! I'm just like a baby dragon," Mendes confessed, after fielding a few questions about their relationship from a "huge fan." That "huge fan" turned out to be Melton, who didn't actually attend the event, but surprised his girlfriend during her interview via a video monitor.

As to how Melton came up with such a hilariously endearing nickname? "Cause I'm kind of, you know, ferocious a little bit," Mendes told E! News. "I'm cute, but psycho."

While speaking to Busy Philipps on Busy Tonight the following day, Mendes further explained, "I can be quite... I guess just ferocious is the only word, but it's like a cute type of ferocious... I'm Brazilian, we're like passionate, so sometimes it's like a little baby dragon comes out."

Beyond that sweet little tidbit of information, the pair has kept the details of their relationship close to the vest. They're still a pretty new couple, though, so perhaps they'll get more comfortable sharing stuff with fans in the future.