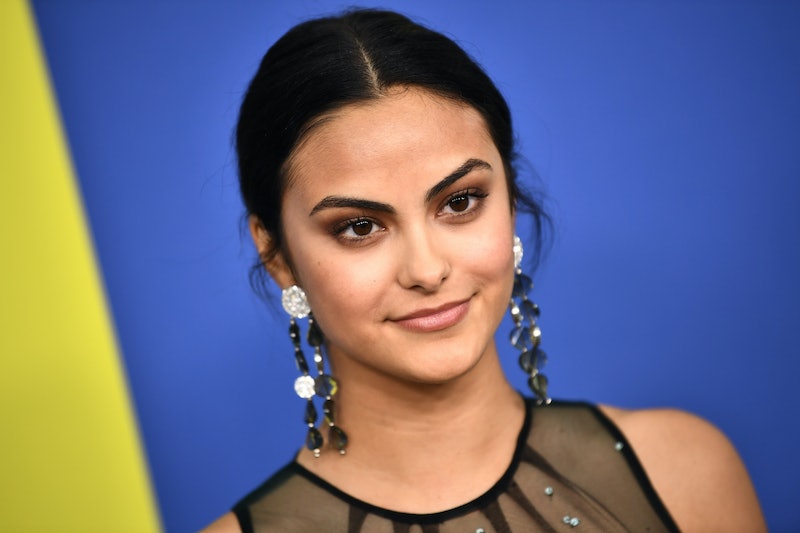 Will the real Camila please stand up? Camila Mendes’ response to being confused for Camila Cabello at the 2019 VMAs is so hilarious. While Cabello’s performance of “Señorita” with Shawn Mendes set the stage ablaze at the MTV Video Music Awards on Aug. 26, another iconic moment occurred off stage: Twitter user @ayalaastrid28 — who was clearly too engulfed in the steamy performance — accidentally tagged the wrong Camila in a post. As in, Camila Mendes of Riverdale fame. In a tweet about Cabello and Mendes' performance, user @ayalaastrid28 wrote, “Just look at them @ShawnMendes @CamilaMendes @vmas #señorita.”

Shortly after the hilarious debacle, Mendes — whose Twitter page is not, for the last time, a Camila Cabello and Shawn Mendes fan account, thank you very much — entered the fray with the best response. She wrote on Twitter on Aug. 26, “wow i really slayed at the VMAs tonight didn’t i.”

For the uninitiated, Cabello is a singer who first rose to fame with girl group Fifth Harmony and has since pursued a blossoming solo career. She’s also rumored to be in a relationship with Mendes, although the two have never flat out confirmed it. But, like. Come on. On the other end of the famous Camila spectrum is Mendes, who achieved stardom in the pop culture zeitgeist as Veronica Lodge in the CW series Riverdale. In short, Cabello and Mendes are two very different Camilas.

Following Mendes’ response, Twitter user @ayalaastrid28 caught wind of the hilarious mix up and declared that she totally meant to tag Cabello. “I love Riverdale and the cast, I never would’ve thought I’d get notice especially like this,” she tweeted in response to Mendes, invoking the proper laugh-cry emojis. “love you Queen”

What makes the moment all the more entertaining, however, is the fact that this is not the first time the Riverdale actor has become intertwined with the singing lovebirds. In the past, Mendes has had to set the record straight that she is not, in fact, a Camila Cabello and Shawn Mendes fan account due to the opportune pairing of her first and last name.

“just a Camila Mendes standing in front of the Twitterverse asking it to stop thinking she's a fan account for Camila Cabello & Shawn Mendes,” Mendes hilariously tweeted back in February 2017.

The VMAs mix up then resulted in hilarious musings among fans. One Twitter user joked that the two Camilas "are gonna have to fight" for the username if Cabello and Mendes were to ever wed.

At the Aug. 26 VMAs ceremony, Cabello and Shawn Mendes garnered several award noms for their collaborative hit "Señorita," such as best choreography, best collaboration, best cinematography, best art direction, and song of the summer. The song won best collaboration and best cinematography. Mendes also nabbed a nom for best artist of the year, a win that ultimately went to Ariana Grande. "Señorita" marks Cabello and Mendes' second collaboration together. The two first joined forces for the 2015 track "I Know What You Did Last Summer."

Congratulations are in order for Camila Cabello — who, ahem, is not Camila Mendes, although both are very talented women — on her VMA wins.

More like this
Taylor Lautner Thought Taylor Swift's 2009 VMAs Interruption Was A "Skit"
By Alyssa Lapid
Jameela Jamil Defends Sam Smith After Trolls Body-Shamed Them
By Jake Viswanath
Here’s How You Can Watch The Grammys 2023 In The UK
By Emma Madden and Catharina Cheung
Twitter Is In Awe Of Taylor Swift’s “Lavender Haze” Music Video
By Jake Viswanath
Get Even More From Bustle — Sign Up For The Newsletter
From hair trends to relationship advice, our daily newsletter has everything you need to sound like a person who’s on TikTok, even if you aren’t.