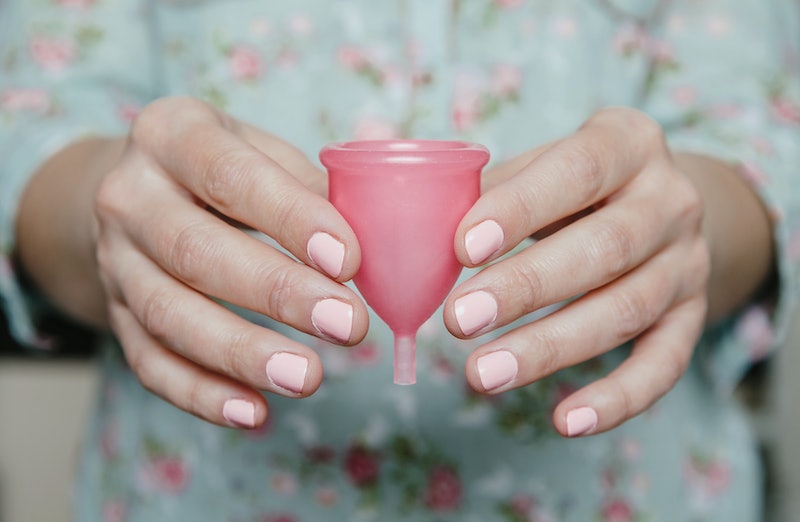 Recently, I heard a nasty rumor. Want to know what it was? OK, you asked for it: If you have an intrauterine device (IUD), you might want to think twice, thrice, four to five times before you purchase a menstrual cup. Why? Because, according to the rumor, the same suction action that keeps a cup from sloshing blood all down your vaginal walls could also pull the IUD clean out of your uterus. Just zoink and bye, now you’re out the not insignificant cost of a new IUD, or vulnerable to pregnancy.

This allegedly unsuitable pairing strikes me as particularly unfortunate because I suspect there’s quite a bit of cross-over between the IUD lovers out there and the menstrual cup faithfuls. For example, one reason I enjoy my IUD is its sustainability. Whereas birth control pills mean a new box, paper instructions, pill pouch, foil packet, and various other plastic wrappings tossed in the trash each month, an IUD generates just one round of waste. It's also convenient and cost-effective: A one-time purchase I won’t have to think about again for years to come. Given that all those arguments also apply to the menstrual cup, a reusable blood-catcher inserted into the vagina during a period, it seems reasonable to expect that you may be currently staring down at your uterus with eyes the size of saucers.

Which is more or less what I did upon hearing this rumor, my mind flashing suddenly back to a 2014 essay from the Hairpin about a menstrual cup getting suctioned onto a cervix such that a professional had to intervene with foot-and-a-half-long forceps and remove it. That seal seems strong enough to suck out an IUD.

The logical side of my brain reminded me that getting an IUD inside a uterus requires someone poking a thin-but-not-thin-enough wand up through your cervix, an experience the IUD-having among you will remember as somewhat painful to very effing painful. Pulling that little monster out should not be as easy as tugging on a tampon string — but could it be, though? Is there a world in which pulling out your menstrual cup could conceivably also pull out your IUD? Here's what two OB/GYNs have to say.

What The Experts Say

"In general, no, removing your menstrual cup should not dislodge your IUD," Dr. Jennifer Conti, M.D., a clinical assistant professor at Stanford University in obstetrics and gynecology and a fellow with Physicians for Reproductive Health, tells Bustle. "The suction alone isn't enough to pull out the IUD."

Alone? As in, another ingredient could tip the balance and leave you with a small copper T dangling your menstrual cup? "Theoretically, the IUD strings could get caught around the edge of the cup and be tugged out that way if you snag the strings along with the cup during removal," Dr. Conti says. "In reality though, it's not something I've seen happen."

Mary Jane Minkin, M.D., a clinical professor of obstetrics, gynecology, and reproductive sciences at the Yale University School of Medicine, agreed that the odds of your menstrual cup yanking out your IUD are vanishingly slim. "I doubt there'd be enough of a suction pull to dislodge the IUD," she tells Bustle.

If You're Worried About Pulling Your IUD Out, Try This

Just as there is a right way to insert a menstrual cup — one that involves twisting it in the vagina to seal it in place — there is a best practice for removing it so as not to disrupt your birth control. "If you're worried about accidentally pulling your IUD out during cup removal," Conti says, "try these steps: go slow; if you feel any discomfort or tugging higher up in your pelvis, stop and try pulling on a different part of the cup; when in doubt, consult your women's health provider."

Of course, where you grip the cup will depend on the model you're using, but if you've selected the standard cone shape, then you can grip it at its base and pinch to break the seal and ease up on the vacuum effect. Most likely, your IUD strings won't be long enough to reach all the way down to the bottom of your cup, but if you're concerned, familiarize yourself with the way they feel before you embark on this enterprise.

"I do encourage my IUD users to check their strings periodically anyway," Minkin says. To do this, you'll have to hook a finger up inside your vagina and probe around a bit: Minkin compares the cervix to the tip of the nose, in terms of feeling, while the threads are coarse and often somewhat stiff. If you can't feel them — or if they feel much longer than usual — consult a health care provider. IUDs can migrate within the body, or come out all together, although the odds of this happening are slim. If your uterus expels your IUD, you might feel some crampy pain; you're probably also going to find the device somewhere, whether that's in your underwear or the toilet or hanging halfway out of your box.

Anyway, the point is that your IUD and your menstrual cup can co-exist peacefully, and you can go back to worrying about more important matters. I myself have moved on to a deep and mostly speculative investigation into what the hell kinda ghosts are haunting the royal nursery.

More like this
This Company Will Send STI Tests Right To Your Door
By Lexi Inks
Are Sagittarius & Sagittarius A Good Match? Astrologers Weigh In
By Kristine Fellizar
Wimbledon Alters All-White Kit Rule Amid Candid Period Discussions
By Catharina Cheung and Rachel Mantock
Try These 3 Manifestation Rituals To Feel Healthier Than Ever
By Brittany Beringer
Get Even More From Bustle — Sign Up For The Newsletter