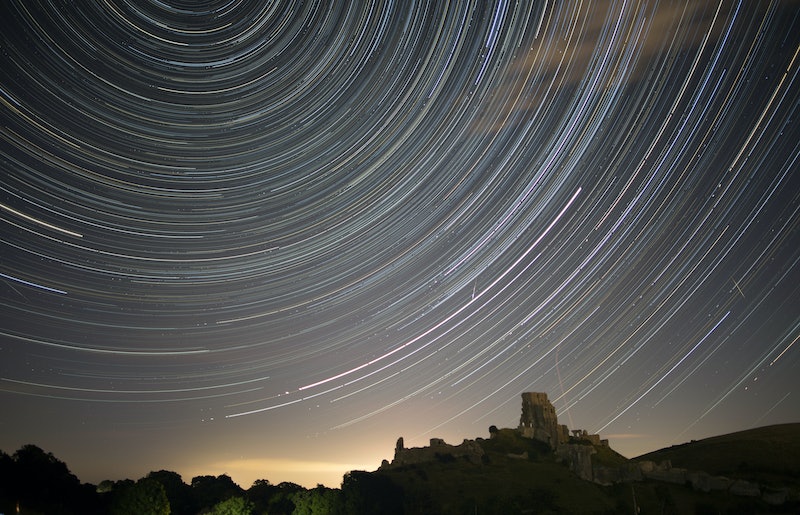 On April 26, 2017, the latest in the supermoon cycle will rise into the sky, blessing us with her celestial powers. Since we're living in an age where anything related to, uh, Not Earth is super trendy hmmm, I wonder why?), I know you're wondering, "Can I see the new moon supermoon in 2017? 2016's three supermoons in a row were ominous, but cool, I guess, and 2015's super-blood-eclipse moon was dope, so, uh, 2017... what's up?"

Here's the deal: The Moon's orbit around the Earth isn't a perfect circle; it's elliptical, and the Moon is constantly moving either closer or farther away from the Earth. The closest point is called the perigee, and the farthest, the apogee. When a full moon or a new moon coincides with the monthly apogee, it's called a "micromoon," because, well, it's super small. Conversely, despite its mythical-sounding name, a "supermoon" is simply a really, really big moon. It looks bigger because it's closer to Earth than usual.

Supermoons can occur with both full moons and new moons. In 2017, there will be four supermoons total; the only visible one isn't until December 3, though. Should we be reading into that somehow? Probably, but I really don't want to.

"Supermoon" is not an official term in astronomy, by the way (which, to be honest, is hardly surprising). It was first coined by Richard Nolle in 1979. Yes, that Richard Nolle — the astrologer. It wasn't until March 2011 that the term officially began gracing headlines, though, and since then, people have been using it left and right. There are rumors that supermoons can lead to an uptick in natural disasters, and though that's not true (supermoons do lead to higher tides and might cause a small increase in tectonic activity, but not enough to cause any serious harm), people love to say it. That's probably why it's not an officially accepted astronomical term, too. The scientists may be a little grumpy about the hyperbole and misuse. I get it, guys. Your job seems tough.

The last time a supermoon fell on a new moon during the lunar cycle was 2009, and won't happen again for at least another five years after the three we've got this year. So, hey. Enjoy these spooky ghost moons, lurking closely, under the veil of darkness. Creepy but cute, right?

More like this
The Summer Solstice Spiritual Meaning, Explained
By Jessica Booth and Brittany Beringer
The Guide To “Witches Stairs” & Why They’re Actually Great For Small Spaces
By Emma Garza
Here’s Your Horoscope For July 2022
By Alexandria Lettman
Are Cancer & Cancer Compatible In A Relationship?
By Kristine Fellizar
Get Even More From Bustle — Sign Up For The Newsletter