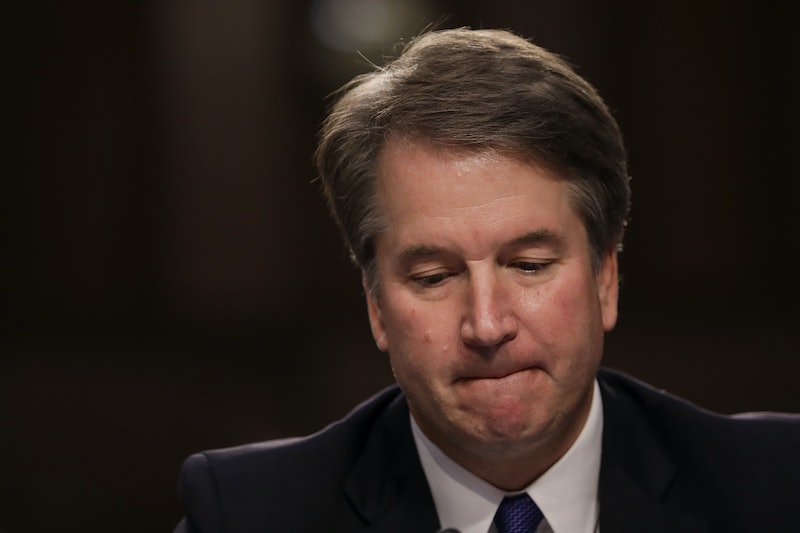 This week, the U.S. Senate will likely vote on whether or not to confirm Trump's nominee to replace late Supreme Court Justice Antonin Scalia. In light of the controversy surrounding Trump's nominee, many may be wondering whether Brett Kavanaugh can be impeached if he does end up being confirmed. While impeaching a SCOTUS justice is certainly possible, whether or not it would actually happen depends on a variety of factors. To be clear, Kavanaugh has not been charged with any crimes and has repeatedly denied all allegations of sexual misconduct.

Federal judges can be impeached because they are typically considered "civil officers" of the United States, who the U.S. Constitution indicates can be impeached and removed from office. As Vox noted, the process for impeaching and removing a federal judge from office is quite similar to that of presidential impeachment and removal. In order for a judge to be impeached, a majority of representatives in the U.S. House must approve an impeachment indictment. For a judge to be removed from office following impeachment, two-thirds of U.S. Senators must vote to convict the judge.

Of course, to be impeached and removed, a judge must respectively be charged and convicted of "treason, bribery, or other high crimes and misdemeanors," in accordance with constitutional requirements. The Week suggested that, if the FBI were to find that Kavanaugh is guilty of the sexual assault allegations that Christine Blasey Ford levied against him, or if more accusers emerged, these could constitute reasons to launch impeachment proceedings against him. This could occur if Kavanaugh is confirmed or even if he simply returns to his role as a D.C. Circuit Court judge, which is a federal appointment.

It's important to point out that if the FBI were to conclude that Kavanaugh is guilty of sexual assault, it would not be considered a criminal conviction. Moreover, Kavanaugh has vehemently denied Ford's allegations and has also denied that he has ever sexually assaulted anyone. Kavanaugh has issued these denials repeatedly, including during a Fox News interview on Sept. 24 in which he stated, " ... what I know is I’ve never sexually assaulted anyone.” That being said, a judge does not have to be convicted — or even accused — of a crime in order to be impeached.

Overall, a federal judge could be impeached and removed, though it would certainly be something that is quite unprecedented for a SCOTUS justice. However, as USA Today reported, some Democrats have already indicated that, if Kavanaugh is confirmed, they plan to launch an investigation into his conduct, should they regain a majority in either chamber of Congress.