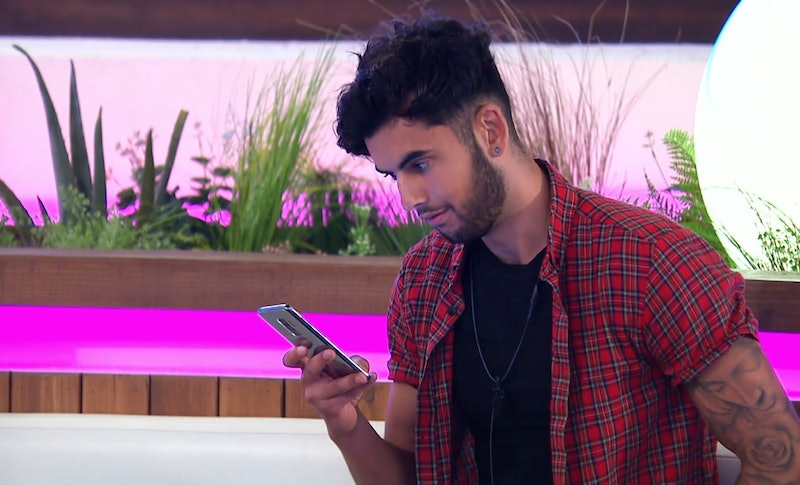 Just like on the UK version, the Love Island U.S. cast can't use their phones. This shouldn't come as a surprise to reality TV fans, since Love Island is kind of a blend between Big Brother and Bachelor in Paradise, which also have no-phone rules. But because Love Island contestants get information about the show via text, you will see them occasionally looking at phones. However, those are strictly for game use, and the cast is otherwise cut off from any contact with the outside world.

As in Big Brother, everyone on Love Island is filmed 24/7 — complete with microphones and night vision cameras. This also means they can't communicate with anyone besides producers and their fellow contestants. As the CBS website explains, "Islanders have no contact with the outside world. That means they can't text, tweet, use Instagram, or even call their mom."

However, phones are still integral to the competition. As CBS explained, "Instead, they are given phones that ping with dates, fun challenges, and messages about coupling ceremonies." While that might make it sound like these cell phones are all fun and games, islanders can also get dumped via these messages. So a ping doesn't always mean good news.

These rules are just like the ones on the original Love Island in the UK (which American viewers can check out on Hulu). However, it's worth noting that the phones aren't just for producers to communicate with contestants — they can text each other, too. As former Love Island UK contestant Harley Judge told OK! Online in 2017, "we have an island chat where we can talk amongst the islanders and then Love Island can contact you so any big event in the villa you receive by text. You keep the phone on you at all times except for charging it, some people are better at it than others because when you're in there you're not thinking about your phones." He also added that you can use the camera on the phone, but with no internet, these images can't be uploaded to social media.

Furthermore, the isolation begins before filming. Chris Williamson from Love Island UK's first season told BBC's Radio 1 Newsbeat in June that the contestants were cut off from the outside world a week before entering the show's villa, which explains why some of the new U.S. contestants have been MIA from social media or have other people posting for them. It's not yet clear if the U.S. version will allow contestants to text each other too, but they definitely won't have their own personal phones to call loved ones.

Of course, if the no-phone rule gets to be too much and the competitors get homesick, islanders can leave the show whenever they want. But with a rotating cast of fellow sexy singles at a villa in Fiji, messages from home may be the furthest thing from these islanders' minds. See how this crop of contestants fare when Love Island U.S. premieres on July 9.

More like this
Twitter Has *Many* Thoughts On Amber & Ikenna’s Dumping From ‘Love Island’
By Frances Stewart
Yes, Luca Bish Really Doesn’t Drink Alcohol
By Shahed Ezaydi and Sophie McEvoy
Winter 'Love Island' Is Officially Coming Back & Twitter Has Thoughts
By Sam Ramsden
'Love Island’s Latest Bombshell Has His Mind Set On One Girl In Particular
By Sophie McEvoy
Get Even More From Bustle — Sign Up For The Newsletter