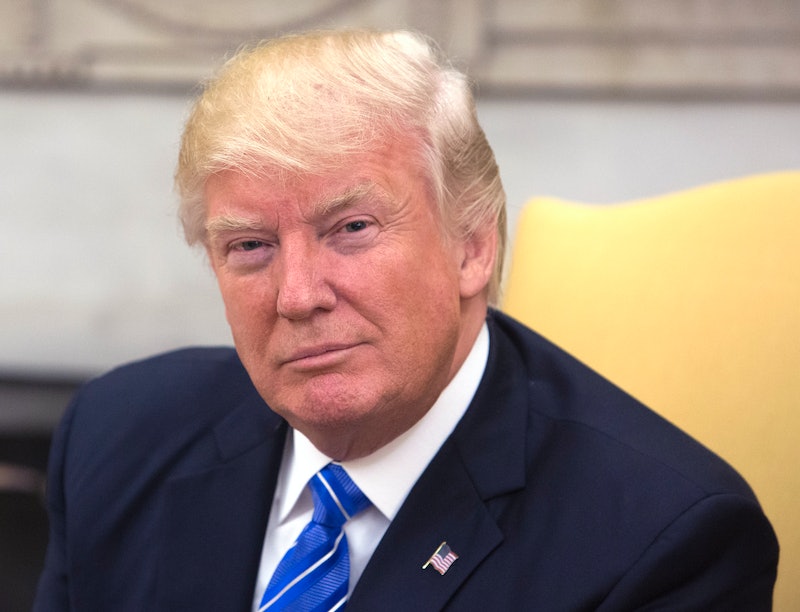 Following The Washington Post's internet-breaking report alleging that President Donald Trump disclosed classified intel that could jeopardize U.S. intelligence efforts abroad, Americans are now wondering if Trump can be impeached for sharing classified information. The White House has denied The Post's report. In a first term already complicated by scandal in its first five months, the possibility of impeachment has remained a steady part of the cultural conversation since the election. And most recently, it garnered even more attention following the hasty firing of FBI Director James Comey.

It's a familiar song, wondering whether the latest story (joining other accusations of impeachable offenses that have been denied or dismissed by the Trump administration) will finally lead to the shameful end-game. In fact, impeachment has been deemed just about inevitable by leading presidential historians and several Democrats have already called to initiate it.

However, the reality of kick-starting the lengthy and complicated impeachment process — let alone the actual removal of a sitting president — depends more on the choices made by the majority-Republican House and majority-Republican Senate than anything else. Given a noted reluctance from most GOP lawmakers to condemn the president and the reserved initial reactions to the Washington Post report, folks probably shouldn't hold their breath for a quick and dirty impeachment or the ascension of President Mike Pence too soon.

The impeachment and removal process is notoriously complicated, bureaucratic, and deceptively unsexy. Ballotpedia gives a breakdown of the process: There's a lot of voting — meaning a lot of room for Republicans in Congress to make or break the process.

First a member of the House would need to present charges to the House Judiciary Committee, and then there would need to be a series of votes: (1) to authorize investigations within the Committee and (2) and again by the majority of the House to request authority; then (3) there would be votes to finalize individual articles of impeachment within the Committee before, finally, (4) presenting each article for a majority vote among the entire House.

If those votes led to the House approving the articles, the president would be impeached and he would then be tried in the Senate (with the House Judiciary Committee acting as a prosecutor, the White House counsel as the POTUS' defense, the SCOTUS chief justice presiding as judge, and the senators acting as jury). Then, of course, there's yet another vote (5) requiring a two-third's majority for a conviction and a removal.

It's unlikely that this process will begin with the current cast of GOP characters that make up the majority of the House (most recently spotted partying en masse celebrating the passing of a controversial health care bill with the president). The odds get slimmer when you consider the voting history of the Senate.

If you're looking out for more substantial impeachment news, the best thing to watch is the shape Congress takes following 2018 elections.

More like this
Michigan’s Governor Is “Going To Fight Like Hell” To Protect Abortion Access
By Andrea Zelinski
How To Fight For Reproductive Rights, Based On How Much Time You Have
By Courtney Young
LGBT+ Men Fleeing Afghanistan Were Denied Asylum By The Home Office, New Findings Show
By Sam Ramsden
The Latest Instagram Trend? Crying On Main.
By Ashley Sumner
Get Even More From Bustle — Sign Up For The Newsletter