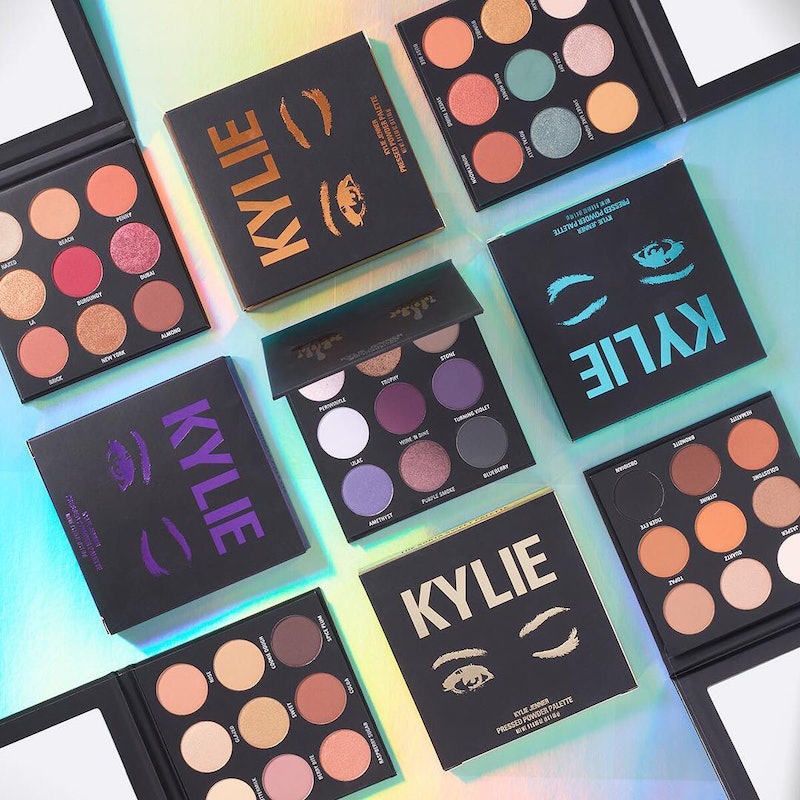 In the not so distant past, Kylie Cosmetics was only available through the brand's website. Fast forward two years later, and Kylie Jenner's brand is officially at Ulta Beauty with a plethora of lip kits, but can you buy Kylie Cosmetics' Kyshadow at Ulta? While Jenner's eponymous brand started its Ulta journey with just a few select lip kits, there are even more Kylie Cosmetics products in the beauty retailer's store now.

According to the Kylie Cosmetics Instagram page as well as a video from Jenner herself that she posted to her personal Instagram story, new products just landed in Ulta Stores, and yes, the retailer now carries KyShadow. According to the Ulta website, five of Jenner's eyeshadow palettes are now available. The includes the Blue Honey, Bronze, Purple, Burgundy, and Sorta Sweet palettes.

There is a catch, though. The eyeshadow palettes are only available in stores. If you were planning to shop the Kyshadows online, you'll actually need to head into your local Ulta, but hey, that just means you get to swatch them first. Given that Kylie Cosmetics is available in every brick and mortar Ulta, you also won't have to look around for the closest location that carries the brand. They all do!

The five new Kyshadow palettes that dropped at Ulta weren't Jenner's only new releases for the retailer. The reality star also has her Créme Lipsticks in stores as well. Plus, she added more shades of her iconic Lip Kits to the bevy of existing ones already present in the store.

Perhaps most exciting for fans of Kylie Cosmetics, though, is that Jenner created an all-new shade exclusive to Ulta. The lippie is Jenner's first product that's not actually sold directly on her website.

The new shade, aptly called Ulta Beauty, is available for purchase both in stores and on the retailer's website. As for the color, it's a warm-toned rose, and yes, it is a Lip Kit, not a single liquid lipstick.

Jenner's production expansion at Ulta Beauty shouldn't come as a surprise to fans of she and her brand. The move to add more products to the retailer's list was something Jenner spoke about before. When her lip kits first launched at Ulta in Nov. 2018, Jenner posted an Instagram story explaining that she would be starting her launch with lippies then branching out into more products. Now, that time is here.

Plus, Ulta has been incredibly lucrative for the makeup mogul. Jenner was just named the youngest self-made billionaire ever by Forbes, and it's partially due to her deal with the retailer. According to the magazine, after signing her distribution deal with Ulta, Kylie Cosmetics saw a nine percent rise in revenue. Not to shabby, right?

While there has been no word from Jenner or Kylie Cosmetics regarding what will be landing in Ulta stores next, fans can definitely expect to see more. With clear success in a retail space and an entire lip kit named after Ulta Beauty, this brand and retailer relationship seems to be going well.