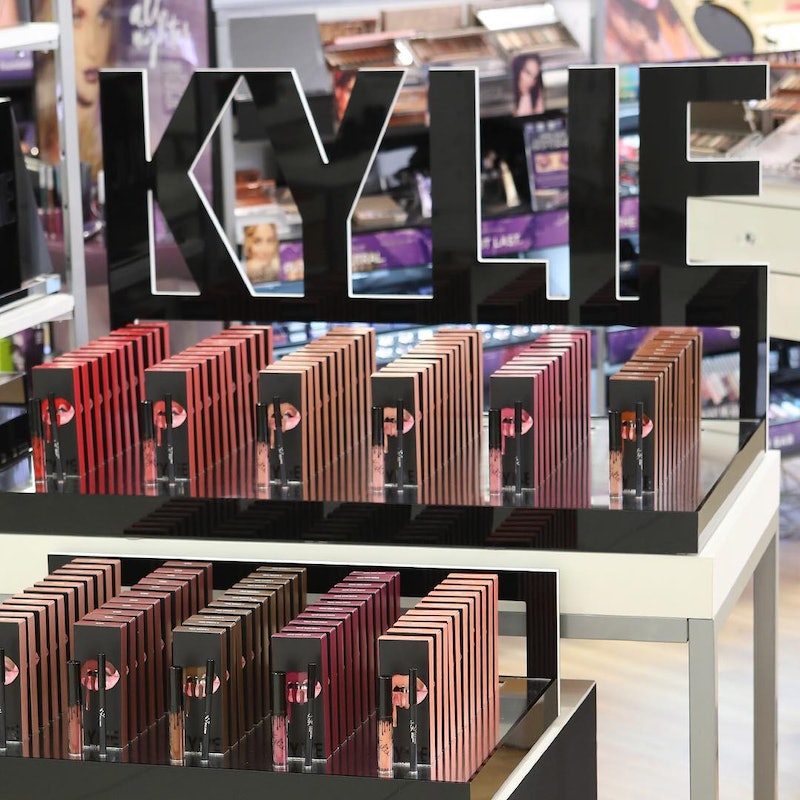 Kylie Jenner's eponymous cosmetics brand never seems to stop growing. From launching new products to hosting sales, the brand is continually giving its loyal customers what they want, and now Kylie Cosmetics lip kits are coming to Ulta just in time for the holidays. If you've ever wanted to swatch or test one of Jenner's most iconic products, you'll officially get your chance.

New of Kylie Cosmetics' Ulta launch has been around for a few months now. However, no one knew when exactly what products would be landing and when. Now, Jenner's brand and Ulta have let the news out of the bag, and Kylie Cosmetics will be headed to the retailer on Nov. 17. Not only will you be able to try the famous lippies in store, but they're arriving just in time for the holiday season. Don't worry about eating Thanksgiving dinner and rubbing off that perfectly lined lipstick. Kylie Cosmetics lip kits will stay put for all your holiday feasting.

In addition to the arrival date, there's even more good news. The brand isn't just rolling out in a few stores. Kylie Cosmetics' Ulta launch will be at every single brick and mortar Ulta store. You won't need to look up if your home location sells the lippies because every Ulta will be.

Obviously, Kylie Cosmetics offers way more than lip kits. Since its inception, the brand has been steadily growing and launching everything from eyeshadow palettes and singles to loose and pressed highlighters. Will these items also be heading to your Ulta's shelves? Yes, but not right away.

In an Instagram video from Tuesday, Jenner explained that her first launch will consist of some of Kylie Cosmetics best lip kits. After that, she goes on to say that more products (such as the palettes) will be rolling out pretty quickly after the initial launch. Get ready to turn your arm into swatch city thanks to Jenner's upcoming move to Ulta.

Jenner hasn't announced which lip kits will be coming to Ulta stores first, but in the video posted to her social media, she calls them her "best" lip kits. This seems to suggest that it may be some of her most popular lippies dropping first.

If you head to the Kylie Cosmetics bestsellers page, you'll find kits such as Candy K, KoKo K, and Dolce K as some of her top duos. As for her singles, given the display image she posted, it seems she is focusing on kits for the Ulta launch, not individual liners and lipsticks at this time.

Hopefully, you've been saving up those Ultamate Rewards points because Kylie Cosmetics' Ulta launch is happening so soon. Whether you're a loyal fan who's excited to finally see Jenner's products in a brick and mortar store, or you've never used Kylie Cosmetics since you couldn't swatch it first, everyone is getting what they want thanks to the brand's Ulta launch.

Mark your calendars for Nov. 17 because Jenner's most iconic product is hitting IRL shelves just in time for you to have the perfect lip look for your Thanksgiving dinner.