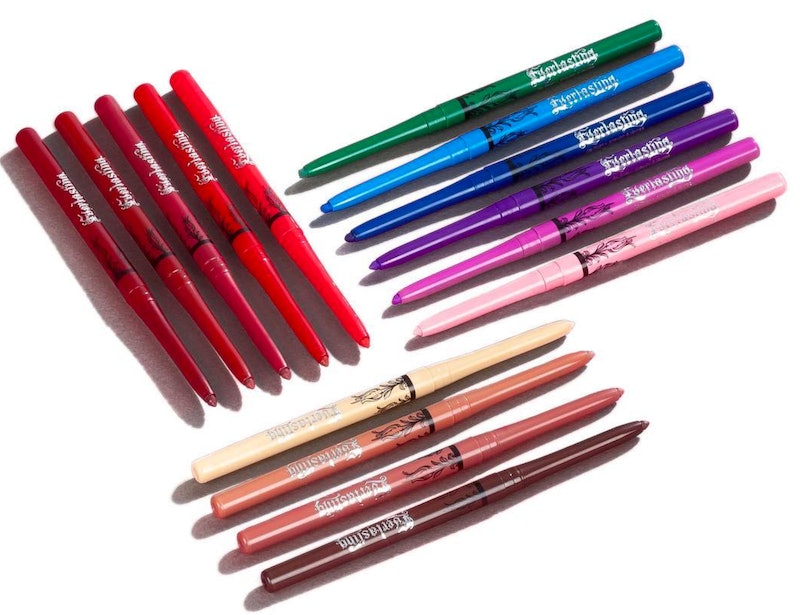 Kat Von D has expanded her Everlasting lip product range quite a bit this year. The Everlasting Liquid Lipstick color selection increased by 25 shades in neutral and adventurous hues. Kat Von D Beauty also launched Everlasting Lip Liners, which boast a super comfy, long-wearing formula and come in retractable pen form. Kat Von D-evotees are certainly curious if the brand will do a KVD Everlasting Vault, featuring the lippies and their matching liners, all of the lippies, or all of the liners. Imagine if they did a Vault with all of the lippie sand liners?!

Any of those options are possible, especially around the holiday season. There is enough devotion among customers and fans to warrant such a package, too. A KVD Everlasting Lip Liner Vault actually exists. So, can you buy it?

Right now, the Everlasting Vault is part of the grand prize in a contest. The brand is giving away the entire collection in vault form. To enter, you must post a lip art look on Instagram by Sunday, May 14. That's pretty much it.

Perhaps this is a harbinger of what's to come later this year? You never know. The creamy liners are another awesome offering from the brand and I can envision KVD lovers coveting this set.

The Everlasting Vault comes packaged in a black box. Have a look below.

Now that's a lip liner wardrobe. You will never have a drought when it comes to liner choices if you end up winning this. It would be a serious #ByeMoney moment if you purchased it, too.

It's an Everlasting rainbow of colors in liquid lippie and liner form.

The liners come in a variety of colors. Who wouldn't want them all in order to create precise lip looks, to do ombre lips, or to mix and match for wild looks, which is something that Kat Von D brand and products encourage?

The Everlasting Lip Liner Vault is certainly something to covet, as well as to hope, wish, and pray to the makeup deities for. I don't see an Everlasting Vault on sale at the KVDB site or at Sephora. So it's not available to consumers. Perhaps it will be in the future! Claws crossed.