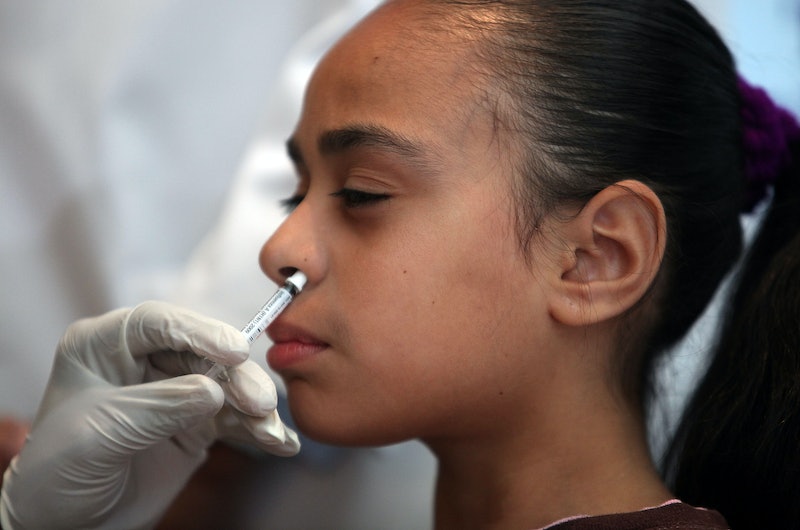 What's worse than getting the flu? How about getting more than once. If you're wondering whether you can get the flu twice in one season, bad news: experts say yes, you can. Unfortunately, the flu is not like the chicken pox, which most people only get once because there's one strain of it. Because there are multiple strains of the flu, and the flu vaccine is only 30 percent effective this year — and it doesn't protect you against every strain — you can get the flu multiple times. Ugh. However, the good news is that catching the flu more than once is not that common, Dr. William Schaffner, an infectious-disease specialist at Vanderbilt University Medical Center in Nashville, told Live Science.

The two most prevalent strains of the flu this season are the H3N2 and the H1N1, which are both strains of influenza A, Schaffner said. Most flu vaccines offer protection against H1N1. However, there is also an influenza B virus, which means if you catch A, you can recover and still catch B, especially if you travel to a part of the country where you could be exposed to a different strain. And, flu season is only half over. "Flu activity has been elevated for [nine] consecutive weeks so far this season," Dr. Brenda Fitzgerald said in a Q&A with the Centers for Disease Control.

"To put that into perspective, the average duration of a flu season in the past [five] seasons has been around 16 weeks, with the longest being 20 weeks. So, by this measure, we are about halfway there this season. That means we have several more weeks of flu to go." What's more, Dan Jernigan, director of the influenza division at the national Center for Immunization and Respiratory Diseases, told Fortune that this is the first year that flu activity has been rampant in every state in the continental U.S.

The flu vaccine is least effective against the H3N2 strain, which is one of the most severe strains of the flu you can catch. "We are always expecting there to be an unusual season," Jernigan said. "We are rather humbled by this virus. We are always preparing for a severe season and welcome a less severe season, but it’s difficult to predict what will happen." Basically, the flu is a zombie-like virus that is constantly mutating, and experts can't always predict how it will manifest from season to season.

If being able to catch eleventy million different strains of the flu isn't bad enough, there is another virus called adenovirus that mimics the flu, but is actually more contagious and often delivers symptoms that are much more severe. The flu's evil cousin can cause symptoms such as vomiting, diarrhea, bladder issues, neurological issues other than a headache (like a stiff neck), a barking cough and breathing distress, an earache, or pneumonia, according to the CDC. If you have these symptoms you should see your doctor ASAP.

The good news is that if your immune system is strong and healthy, you avoid sick people, and you are vigilant about keeping your hands and home clean, you're less likely to come down with the flu and adenovirus. Practicing all three of these things is really important because you can actually catch the flu just by talking to someone who has it because new research says that the flu can be spread just by breathing. This is why you should never try to be a hero and go to work if you have the flu, unless your goal is to take out your entire workplace.

If you are laid up with the flu, former Scream Queens star Lea Michele posted her go-to feel-better-fast flu remedies on her Instagram story last week, and they actually contain some things that experts say can strengthen your immune system. Things like apple cider vinegar, lemon, honey, mushrooms, and garlic — which are all included in Michele's recipes — can keep help fight the virus.

If you're not sick, it's still worth trying these things to prevent the flu from taking you down in the first place. And, even though it's not 100 percent effective, and it doesn't protect you against all strains, experts still recommend that you get a flu shot. In some ways fighting off the flu is like fighting off zombies. So, be a zombie-fighting warrior and do everything you can — short of putting onions in your socks — to stay well.

Seriously, if there were ever a time to harness your inner introvert and stay home with your beloved two-dimensional friends on Netflix and Hulu, this is it. With a lot of vigilance, and a little common sense, we can just might get through this demonic-flu season in one piece.