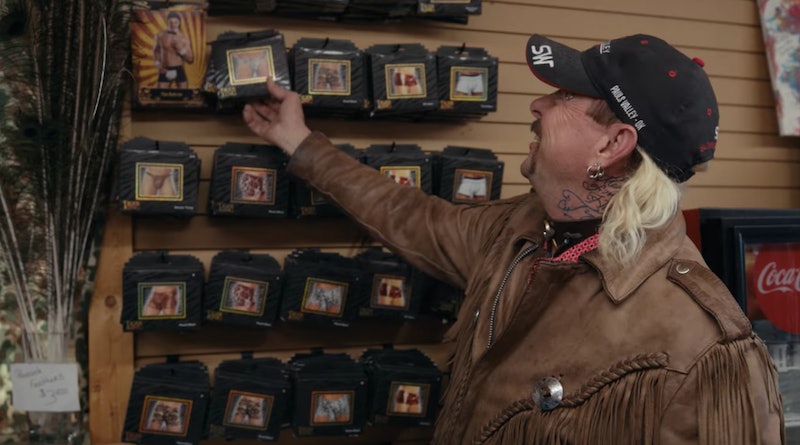 Of the many, many outrageous plot lines featured in Netflix's addictive new documentary, Tiger King, is Joe Exotic's two political campaigns and the absurd merchandise he created to promote his efforts. Naturally, that left many viewers wondering: Can Tiger King viewers still buy Joe Exotic's campaign merchandise in 2020? The former owner of Garold Wayne Exotic Animal Memorial Park in Wynnewood, Oklahoma, Joe Exotic — whose real name is Joe Maldonado-Passage — ran for president in 2015 as a Libertarian with a campaign that was just as over-the-top as his personality.

"First thing is, I am not cutting my hair," Joe said in one of his campaign videos, where he declared himself to be pro-LGBT rights and anti-gun restriction. "I am not changing the way I dress, I refuse to wear a suit. I am gay — I've had two boyfriends for most of my life, thank god, I finally got legally married." While his campaign was short-lived, Joe was featured on Last Week Tonight with John Oliver in a segment about third-party candidates, where the talk show host poked fun at his outlandish ads. "He's broke as sh*t and will not wear a suit," Oliver said, quoting the eccentric candidate.

The former zookeeper used the momentum from his TV appearance to launch another campaign — this time for Governor of Oklahoma — in 2018. "I learned more in 11 months in running for president than I did in 12 years of school," he told OKC FOX at the time. Though he refuted claims that he was only running for governor as a publicity stunt, telling the outlet, "I can't keep my mouth shut for four more years," he also launched a great deal of campaign merch.

Among Joe Exotic's campaign merchandise were Joe Exotic-branded condoms — "because if you don't vote for me, you'll be screwed," he explained to the Tiger King cameras — lotion and, of course, animal-print underpants. In addition to handing out that merchandise on the campaign trail, visitors at the Garold Wayne Exotic Animal Memorial Park could purchase all kinds of tiger and Joe Exotic-themed items in the zoo's gift shop — including BB cream.

However, as Joe is currently serving a 22-year prison sentence and the zoo — now known as the Greater Wynnewood Animal Park and owned by Jeff Lowe — it's not possible for Tiger King's viewers to purchase items from the gift shop right now. In addition, according to Oxygen, Joe's online store, which sold underwear, moisturizer, and "signed copies of an issue of Hollywood Weekly" featuring profiles of him, has been taken down.

The Greater Wynnewood Animal Park is also reportedly selling "personally owned Joe Exotic shirts" on the zoo's Facebook page, though an account seemingly belonging to Joe claimed in a post, that the shirts actually belonged to the staff of his now-defunct magic show.

However, there is still a chance to get Joe Exotic merchandise, as Joe and his loved ones are currently running their own online store via Facebook, where they're selling everything from "2016 Presidential campaign wrist bands" to publicity photos of him with tigers. Unfortunately, as a recent post explained, the store is currently out of "condoms, business cards, buttons and bumper stickers" so fans will have to settle for tee shirts and photos instead.